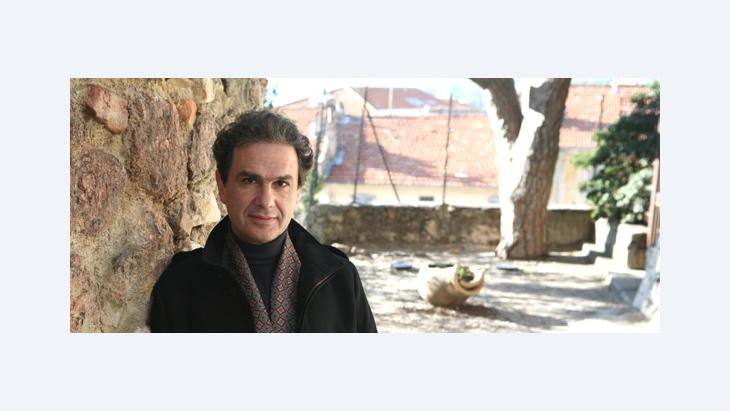 Hunger, Not Just for Food

﻿After devoting himself to femininity with "Songs for Sad Women" and to Atlantic melancholy with "Em Português", it was probably inevitable that his new work would finally mirror current events in the MENA region. Oud master Rabih Abou-Khalil explains to Stefan Franzen how he combines a plastic chicken, fish & chips and a bankers' banquet into a musical feast with political-surreal features

﻿When considering what has become known as the "Arab Spring", he is moved not by the "cold, political side" but by its impact on humanity. Rabih Abou-Khalil is deeply concerned.

"I hope I'm wrong. But I believe that we will be assigned fewer cultural liberties after the revolutions, not more. The uprisings are not limited to the intellectual protest movements in capital cities. Culture is also sustained by a huge rural population in many major Arab nations. Here, the main factors are religious affiliation and an extremism born of economic need. People are not educated and are unable to satiate their appetite at all," he says.

It is this "Hunger" that inspired the title of his new CD. It refers to a hunger for knowledge just as much as hunger for food, and finally also the hunger for music, stage and studio situations still felt by Khalil and his closest colleagues even after 20 years in the business. Khalil secret: With the accordion player Luciano Biondini, tuba player Michel Godard and percussionist Jarod Cagwin, he gathered people around him who focused on the act of playing together right from the outset, not whether they were the best soloists around at the time.

Miles Davies as a role model

Abou-Khalil, who sets store by the fact that he never makes solo oud recordings and cites Miles Davis as a major influence in efforts to achieve a coherent band sound, has also managed to make his first work for the French label World Village sound more stringent and streamlined.

Rabih Abou-Khalil has again managed to produce a recording without using any guest artists at all, apart from the long-time companion, saxophonist and vocal artist Gavino Murgia from Sardinia, who makes irregular appearances with the band. From left to right: Jarod Cagwin, Michel Godard, Rabih Abou-Khalil, Gavino Murgia, Luciano Biondini

​​The pieces are shorter, with a greater emphasis given to composed passages over improvised ones. Perhaps a natural progression from "Еm Português", where everything revolves around song?

"When I was very young, I played my early compositions to my most important oud teacher, Wadih Al-Safi, and he shouted: 'Wait, wait, what's all this rubbish, I can't sing any of it!'. And since then, I've always said to myself if you can't sing it, it won't stick. Not everyone must be able to sing it, but it must make sense, a literal sense. My father was a poet, and that's why I have a close relationship with literature. I'm aware that in composition, there has to be a certain rhyme, a balance between language of music, even it's only an apostrophized language," says Abou-Khalil.

On "Hungry People", Khalil has perhaps realized this balance like never before. It comes wonderfully into its own in a perfectly cantabile intermezzo such as "A Better Tomorrow", which is almost a "sung prayer" for a better tomorrow in the Middle East and North Africa, but also in the many pieces that tend towards his elaborated oriental jazz, and which – just as on all his albums – also exhibit humoresque characteristics.

Like "Bankers' Banquet", for example, in which Godard and Murgia invoke the grotesque dance of all those who greedily take everything away from the poor, whether it be western finance sharks or Arab ruling clans. He has also found other, quite personal facets on the subject of the "big feast", such as "Fish and Chips and Mushy Peas", inspired by the English fast-food speciality that stuck to his fingers during a concert in London.

"Shrilling Chicken", on the other hand, is not dedicated to fast-food, but to a plastic chicken that his sister once gave to him as a present – and which provides a squawking prelude to the track's exquisite Latin groove. 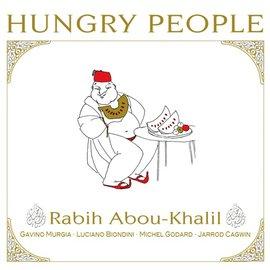 Humour and insight: "With irony, perhaps even with surrealism, we can gain a better understanding of the world," Rabih Abou-Khalil says

​​"Music should never be too serious," says Abou-Khalil. "Then it loses its charm, just like a person who is always serious comes across as deathly boring. With irony, perhaps even with surrealism, we can gain a better understanding of the world. In the Middle East especially, it all often seems to me to be decidedly surreal and contradictory. That's why my compositions often have surreal names, to allow the listener more scope for fantasy, I don't like titles that are too profound. Why write instrumental pieces? Because it's not possible to express feelings precisely in words. And then you're expected to give it a title after all that!"

Lebanon as a prism

There is only one track on "Hungry People" with a title that leaves no room for doubt. "Dreams of a Dying City" is a dark reflection that presides over the entire album, the fourth version of this leitmotif composition recorded by Rabih Abou-Khalil. It was originally written with Beirut in mind, and although the fires of rebellion have since been lit in many cites of the MENA region, Lebanon still remains uppermost in the composer's mind.

"I think the problem with Lebanon is that anything happening beyond its borders has an impact on it. Whether it be that people are for or against Asad, pro or anti-Israeli. Everything that's happening in the region is reflected in Lebanon. Socially speaking, it is still a free country where people can do as they please. But I fear that small nations like this one will not be spared from the impact of what's occurring around them. We'll probably have to play 'Dreams of a Dying City' for some time to come," says Abou-Khalil.

END_OF_DOCUMENT_TOKEN_TO_BE_REPLACED
Social media
and networks
Subscribe to our
newsletter