In 1978, the oud player Rabih Abou-Khalil fled the Civil War in Lebanon. He went to Bavaria, where he studied music. Today, he is one of the most renowned and successful exponents of World Music in Europe. By Lewis Gropp 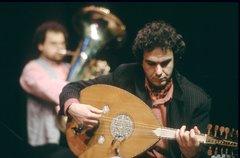 Rabih Abou-Khalil has won the German Jazz Award ten times, and he has sold more than half a million records

​​At the beginning of the 90s, Matthias Winckelmann offered a young unknown named Rabih Abou-Khalil a contract with his jazz label, Enja. Many of Winckelmann's music- industry colleagues greeted the news with a patronising smile. "Fusion", the merging of jazz with rock, was still generally regarded as the most innovative movement in jazz. Even to experts in the field, Abou-Khalil looked like a marginal, if exotic, figure: a Lebanese oud virtuoso with some decidedly unconventional ideas about music.

As it turned out, Winckelmann was ahead of his time in making that brave decision. Rabih Abou-Khalil represents a quantum leap in contemporary improvised music – a melding of traditional Arabic, European classical and American jazz music that sparked the sudden and breathtaking expansion of the jazz spectrum in the 1990s. Rabih Abou-Khalil has now won the German Jazz Award ten times, and he has sold more than half a million records. In Germany, and therefore in Europe as a whole, he is one of the most important figures in jazz and World Music - artistically and commercially.

The Western compulsion to innovate

Khalil, however, does not pose as a heroic avantgarde innovator triumphing over the dumb ignorance of a sluggish artistic milieu. Instead, he sees recent developments in improvised music as a continuation of longstanding traditions in European social and cultural history. "In the course of the Enlightenment, music and musical history were catalogued and categorised for the first time: Baroque, Romantic, Viennese Classic, the Classical Modern, and so on.

For the very first time, a musical-historical consciousness emerged and developed – and with it, the incessant pressure to compose something entirely new and unprecedented." When purists accuse him of having watered down the authentic inheritance of classical Arabic music, Khalil insists they are wrong: "Today’s tradition is yesterday's revolution." Like life itself, says Khalil, music develops inexorably and is subject to constant, natural change.

As Khalil forcefully points out, however, there is also a downside to the absence of any binding aesthetic values: "Nowadays, people are so tolerant that any old shit is accepted." A culture of surfeit and excess presents enormous challenges to music and art: In the age of the mass media, we are trapped in a maelstrom of sensory overload, so how can we develop any idea of truthfulness? Khalil: "That's precisely the problem: we have so many books and so little poetry; we are force-fed sex, but there is so little sensuousness."

Yet, according to Khalil, this is precisely what makes art what it is: "Art is what it always was: the expression of sensuousness. From the Venus de Milo to the present day, nothing essential has changed. It is all about sharpening and developing one's five senses." He seems to be a lighthearted man. His eyes are surrounded by laughter-lines; and nothing about him suggests that the loss of his homeland (for example) has left a deep inner wound. The oud, however, is a serious instrument. The music of many oud players has a meditative, melancholy quality, as if it's above or beyond the quotidian world. In the hands of old masters such as the Iraqi Munir Bachir (who died in 1997), the strains of the Arabian lute are like the sublime soundtrack to a period of mystical contemplation.

For Khalil, though, this has less to do with the instrument itself than with the spirit that moves the person playing it: "I think that an artist should try to investigate every possible avenue of spiritual perception. The oud is oustandingly suited to such an endeavour." He feels annoyed by instruments that can express only one feeling: "I'm thinking of the harp, for example. Or the recorder!"

The expressive power of German and Arabic

Unlike many Lebanese in exile, Khalil went not to France but to Germany: "Germany is a country that's culturally very rich – not just in the field of music, but in painting and architecture too." In addition, he says, the German language is more similar to Arabic than most people think: "Are you familiar, for example, with Friedrich Rückert's translation of the Koran, from the year 1896? He succeeded in capturing the spirit of the Arabic, though one really should call his book a reworking rather than a translation. In the range and variety of its expressive possibilities, I find that German is very closely related to Arabic."

Recently, Rabih Abou-Khalil showed that the Arabic and German idioms are indeed superbly compatible: together with the jazz pianist Joachim Kühn, he has just recorded the album "Journey to the Center of an Egg". It's Kahlil's 14th record for the Enja label - and it won't be his last.

A new exhibition, "Syria – Against Forgetting", at Cologne’s Rautenstrauch-Joest-Museum focuses on Syria's artistic and cultural heritage and pays tribute to the country before ... END_OF_DOCUMENT_TOKEN_TO_BE_REPLACED

Madrid's about-face on the Western Sahara conflict has enraged Algeria. Trade relations have been frozen unilaterally and a cut in gas supplies to Europe could be in the pipeline ... END_OF_DOCUMENT_TOKEN_TO_BE_REPLACED

Yazan Khalili is spokesman for The Question of Funding, a collective of artists taking part in the leading German contemporary art festival Documenta 15. Here, he responds to ... END_OF_DOCUMENT_TOKEN_TO_BE_REPLACED

Mourad al-Marouai was just nine when a landmine killed him on a beach in war-torn Yemen, a tragedy that will haunt his family forever. After a swim, the little boy "suddenly ... END_OF_DOCUMENT_TOKEN_TO_BE_REPLACED

This year’s Morgenland Festival opened with the premiere of Kinan Azmeh’s musical theatre piece, “Songs for Days to Come”, based on fifteen poems by contemporary Syrian poets. ... END_OF_DOCUMENT_TOKEN_TO_BE_REPLACED

A ceasefire has been in effect in Libya for the past year and a half. Yet after Russia's attack on Ukraine, another proxy war looms in Africa's most oil-rich country. Mirco ... END_OF_DOCUMENT_TOKEN_TO_BE_REPLACED
Author:
Lewis Gropp
Date:
Mail:
Send via mail

END_OF_DOCUMENT_TOKEN_TO_BE_REPLACED
Social media
and networks
Subscribe to our
newsletter