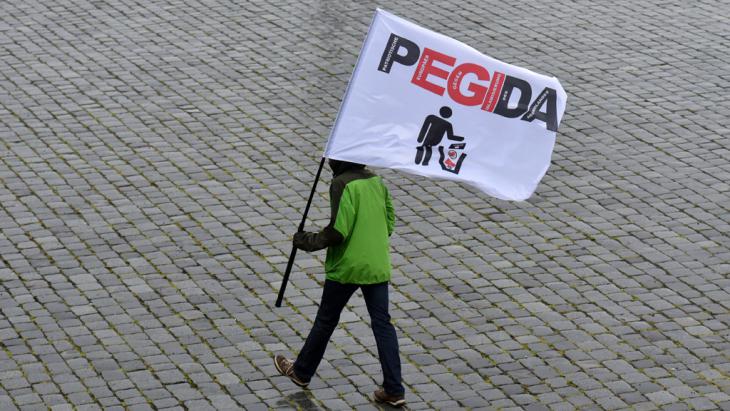 The taint of PEGIDA journalism

No one who has written in support of a "culture of rejection" should be surprised by the Pirincci scandal, or that someone might lash out in response. Robert Misik considers the debate

Suddenly, following the speech given in Dresden last Monday by Akif Pirincci, a radical right-wing best-selling author, there has been an explosion of public outrage about PEGIDA (Patriotic Europeans Against the Islamisation of the Occident). The reaction focuses on the words he hurled out: "Of course, there are other alternatives. Unfortunately, the concentration camps happen to be out of action at the moment." By employing the verbal acrobatics typical of right-wing extremists, Pirincci effectively managed to blur what he actually meant.

Did he mean that the concentration camps were "unfortunately" not available to solve the refugee situation? Or, in accordance with the paranoia commonplace among the radical right, did he mean that the government, those in power – otherwise known as "the system" – want to replace the German population and have decided upon an insidious modus operandi, since the "concentration camps are unfortunately out of action?" Was this then the most abominable Nazi slander or a mad fantasy of self-victimisation? It really doesn′t matter, since Pirincci was well aware how his public would react to these words and thus purposely framed them in a context that would allow him, if need be, to absolve himself.

And now everyone is outraged – not only about Pirincci, but also about the violent mood of the mob at PEGIDA demonstrations and the consequences of far-right rabble-rousing, in particular the attempted murder of Henriette Reker, one of Cologne′s mayoral candidates. It is clear, however, that the knife wielders, the arsonists targeting refugee shelters, and the mobs of demonstrators have not simply appeared out of the blue.

From centre right to the radical fringe

In fact, PEGIDA journalism has been around for a while, spanning, in the subtlest shades of grey, from the centre right to the radical fringes of society. Spiegel Online columnist Jan Fleischhauer, for instance, writes in fear and trembling about "Muslim men" and the "masculinisation of public spaces." Others, in turn, merely require these catchwords in order to unreservedly express their fears for "blonde German women."

It has also become quite popular to firmly demand that refugees from Syria must promptly acknowledge "our values" – namely tolerance, support of peace, and respect for the norms of democracy. Of course, this is tied to the general suspicion that they would not otherwise do so. All of this is, of course, completely absurd. One only has to reflect for a moment that it was not without good reason and intent that these people fled a region devastated by war and hatred to come here to our country. 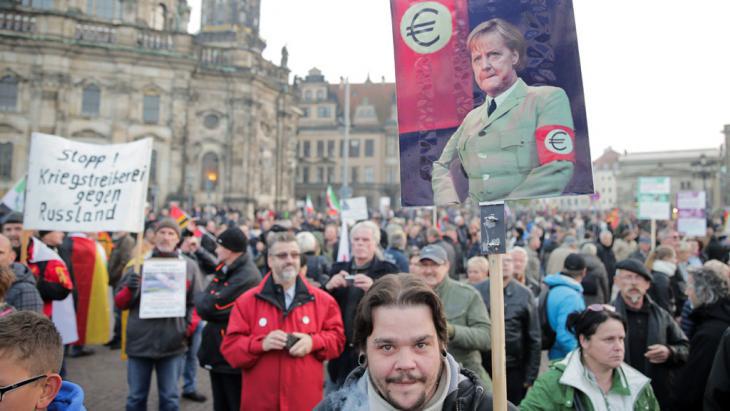 "And now everyone is outraged. About the violent mood of the mob at PEGIDA demonstrations and the consequences of far-right rabble-rousing, in particular the attempted murder of Henriette Reker, one of Cologne′s mayoral candidates. It is clear, however, that the knife wielders, the arsonists targeting refugee shelters, and the mobs of demonstrators have not simply appeared out of the blue", writes Misik

In any case, no one has made clear whether it is necessary to avow adherence to "our values" on a daily basis, or if it is enough to do this simply once. In addition, there is no mention of what sort of commission or body should even observe such an oath. All this, however, is not even necessary now, as the seed has already been sown. We are left with the impression that "these Arabs are somehow sinister." These postulates can be observed just as equally in the editorial pages of the FAZ as in the ravings of Islamophobic blogs, such as "Politically Incorrect." And there is no need here to waste any ink on the likes of Broder and Sarrazin. The matter is crystal clear: over the past few weeks, a particular journalistic current has stopped at nothing in an attempt to replace the "welcoming culture" with a "culture of rejection."

Malicious tongues might also raise the question as to whether and to what extent the refugees should adapt to this culture of PEGIDA journalism. Should they perhaps torch their refugee shelters themselves?

In the process, such PEGIDA journalism has proven itself to be in reality a close ally of Islamic fundamentalism rather than the opposite. In fact, the "welcoming culture" displayed at train stations, at the borders, and in communities was the hardest blow against anti-Western fundamentalism in recent years – certainly more effective than any drone.

Images of Muslim refugees, unselfishly helped by "Christian Europeans" have been conveyed throughout the whole of the Islamic world by Al-Jazeera and other broadcasters. "We have been told that you are the unbelievers, yet, you are in the truest sense the most compassionate Muslims," said a Syrian man to the cameras. 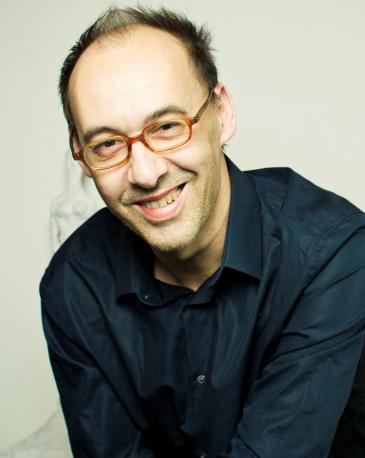 These images contradict the core of Islamic propaganda, namely the claim that "no one in the West is interested in the suffering of Muslims." It is no surprise, then, that the IS has been raving about "fake Muslims, who have been throwing themselves into the arms of the infidels." At the Vienna Westbahnhof train station, Salafists posing as volunteer helpers tried to immerse themselves into the crowd of refugees. These very same refugees then alerted the police and Austria’s state protection agency.

It cannot be ruled out, of course, that the current generation of refugees could embrace a counter-reaction should the "culture of rejection" incited by PEGIDA journalism take root. They would then feel cast aside and, over the course of time, the "us against them" and the "us against the West" narratives would once again gain ground. The assertion by PEGIDA journalism that "they are simply incompatible with us" would then become a self-fulfilling prophecy. This is what makes it so dangerous and despicable.

Within this panorama of PEGIDA journalism, it should be noted that utter fabrications or half-truths concerning "violence" in refugee shelters have been reported within minutes as fact, even in the pages of serious newspapers. Most of the reports circulating are wholly untrue.

Yet, even those stories with only the slightest grain of truth to them have been presented like the news that made the headlines just a few weeks ago. Then, it was reported that refugees had appropriated relief supplies and a massive police presence had to be deployed. It soon became apparent that this depiction was not only false, but insinuated a completely misleading image of events.

A Green Party politician was, in fact, surrounded by refugees as she attempted to distribute hygiene articles. In her clumsy attempt to pass out the items, a brief scuffle broke out. It was no worse than what one sees every Saturday at the entrance to any football stadium, and these scuffles never warrant any reporting in the press. The police were alarmed, but only arrived long after the shoving had subsided. This was a non-event, yet it made the first page of German newspapers. The story fulfilled no other purpose than to whip up insecurity in the population concerning the apparent potential for violence presented by the uncontrollable influx of refugees.

Those who practise this kind of journalism have no reason to be disgusted by Pirincci or the angry mobs they incite. Nor should those who construct insane threatening scenarios be surprised when – as in Cologne – someone ends up lashing out.

Home
Print
Newsletter
More on this topic
Non-fiction: ″Angst ums Abendland″ by Daniel Bax: The apocalyptics of the WestThe psychology of PEGIDA: The craving for an enemyA year on, Germany's PEGIDA radicalised by refugee influx
Related Topics
AfD | Alternative for Germany, Islam in Germany, Islamophobia, Media in Germany, Muslims in the West, Pegida, Policy on refugees and migration, Refugees, Right-wing populism, Rule of law, Xenophobia
All Topics

Even in times of war and pandemic, refugees are still being deported to Afghanistan. Several deportation flights have taken place in recent weeks alone. Since those affected often ... END_OF_DOCUMENT_TOKEN_TO_BE_REPLACED

On 7 March, Switzerland became the latest European country to vote in favour of a so-called "burka" ban. It was yet another feather in the cap of the right-wing populist Swiss ... END_OF_DOCUMENT_TOKEN_TO_BE_REPLACED

What drives young men into the arms of Islamist extremists – and how can they be re-integrated into society? Five years after the deadly attacks in Paris, urgent questions remain ... END_OF_DOCUMENT_TOKEN_TO_BE_REPLACED

Austria's chancellor is seeking to criminalise "political Islam". The move would put non-violent, non-radical Muslims under blanket suspicion and is hardly helpful in the fight ... END_OF_DOCUMENT_TOKEN_TO_BE_REPLACED

Rather than suspecting Muslims in general, we need to co-operate more with Islamic scholars, Muslim congregations and associations, writes Muhammad Sameer Murtaza in his ... END_OF_DOCUMENT_TOKEN_TO_BE_REPLACED

END_OF_DOCUMENT_TOKEN_TO_BE_REPLACED
Social media
and networks
Subscribe to our
newsletter