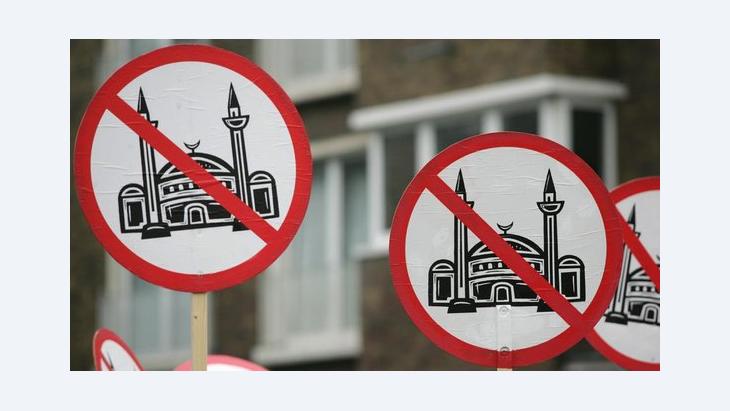 ﻿At a recent conference in Germany looking at radical critics of Islam, there was consensus that it was about time that politicians and society looked more seriously at the growing defamation of Muslims. By Claudia Mende

For a long time, nobody took hate propaganda against Muslims very seriously as a serious threat to democracy. That has changed, following the massacre in Norway by Anders Behring Breivik and the series of murders by the Zwickau NSU terrorist cell in Germany.

Breivik's shooting spree, which he justified on the basis of Islamophobic fantasies, and the far-right killings of immigrants in Germany both show the explosive potential of racism and anti-Islamic feeling in destroying social cohesion. Parties such as "Die Freiheit" ("Freedom"), the "Pro-" movement, or the citizens' initiative "Pax Europa" work to paint a frightening picture of the alleged "Islamisation" of Europe: they refuse to see Islam as a religion and insist that it is a totalitarian and violent ideology.

Websites in Germany like "Politically Incorrect" or "Nürnberg 2.0" offer a home for unfiltered and generally anonymous defamation. Among the range of activities undertaken by those in the anti-Islamic movement is the deliberate disruption of events giving information about Islam, integration or the dialogue between religions.

Between scepticism and open hatred

Anti-Muslim defamation varies between scepticism and open, racist hatred. In practice, it is often difficult to tell them apart. Prejudice against immigrants and Islam reaches well into the middle classes. According to a 2010 study on right-wing extremist views by the Friedrich Ebert Foundation, well over half of all Germans (58.4 percent) were in favour of restricting the religious freedom of Muslims. 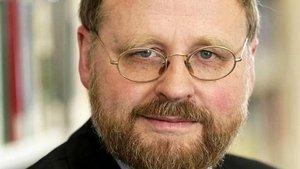 According to the UN's special rapporteur on religious freedom, Heiner Bielefeldt, anti-Islamic blogs ascribe to Muslims "a negative collective mentality under which the individual counts for nothing"

​​Anti-Islamic feeling is not to be confused with serious criticism. In an open society, everyone has to live with criticism, even when it is harsh. As Heiner Bielefeldt, special rapporteur on freedom of religion or belief for the UN Human Rights Council, puts it, "No-one has the right not to be criticised."

Speaking at a conference of the Eugen Biser Foundation at the Evangelische Akademie in Tutzing, Germany, Bielefeldt said that the principle of freedom of religion may not be used to protect the honour of religion as a group phenomenon; freedom of religion is a right of the individual, provided for in the constitution. But he noted that anti-Islamic blogs ascribed to Muslims "a negative collective mentality under which the individual counts for nothing". By depriving members of a minority of their individuality, such blogs poisoned the social climate.

Anti-Semitism expert Wolfgang Benz sees stereotypes at work when Muslims are criticised which are similar to those used towards Jews in anti-Semitism: for example, that Islam seeks world domination. The typical building blocks for such stereotypes are generalisation, a concentration on negative aspects and reliance on rumour and gossip. 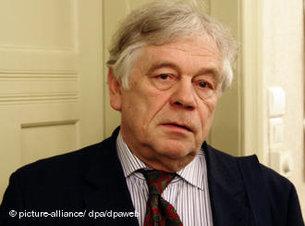 Wolfgang Benz says, "Opposition to Islam, which calls itself Islam criticism, is always an option when the arguments run out and hate is all that's left"

​​But the problem can also be described less academically: "What's wrong with our society?" asked Manfred Schmidt, president of the Federal Office for Migration in Nuremburg. He sees forms of racism such as anti-Semitism and Islamophobia as an outlet for a dissatisfaction and insecurity in Germany which is evidently widespread.

But why aren't websites and internet forums with defamatory content closed down by the law? According to the lawyer Antje von Ungern-Sternberg of Munich University, some of what can be found on anti-Islamic blogs and websites is certainly "appropriate for criminal investigation". She argues that "freedom of opinion has no claim to extra rights on the internet".

All the same, charges are rarely brought. The Munich prosecutors are currently looking into charges of incitement against Michael Stürzenberger, a former member of the ruling CSU party in Bavaria and now press spokesperson for the Bavarian branch of the "Die Freiheit" (Freedom) party.

Similarities between Islam critics and the far right

There are ideological overlaps between anti-Islamic groups and the extreme right. Miriam Heigl of the City of Munich's special unit on the extreme right notes that "Right-wing extremists increasingly use anti-Islamic language." She sees anti-Islamic opinions as having a clear link to far right propaganda. That's why the domestic intelligence services are now observing the anti-Islamic scene rather more closely.

The federal domestic intelligence agency, the Bundesverfassungsschutz, says that, since the massacre in Norway carried out by Anders Behring Breivik in spring last year, "the intelligence agencies at state and federal level have been looking much more closely at whether and how far anti-Islamic agitation on the internet can be defined as extremist." But official observation, including the use of informers and spying techniques, will only be possible when this examination has been completed and the intelligence agencies have found "real indications of extremist intentions."

The agencies in the individual states have in some cases moved further. In North Rhine-Westphalia, the "Pro-Köln" and "Pro-NRW" movements are already under observation, and the agency in Hamburg is looking closely at the website "Nürnberg 2.0," which is a kind of digital pillory, threatening those who criticise the anti-Islamic movement with future punishment. 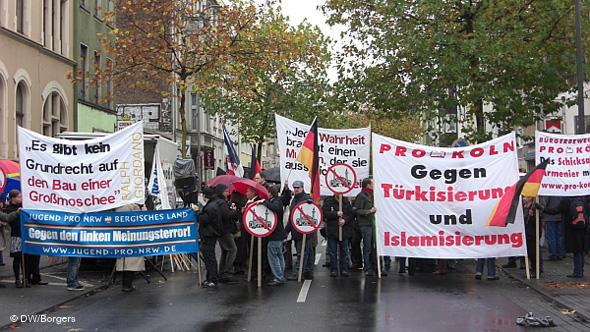 ​​But criminal prosecution and observation by the agencies are not effective instruments in dealing with the issues of racism and Islamophobia in society. Those have to be handled primarily on the political level. But the political level seems to avoid clear language on the issues; on the contrary, during the publicity in 2010 surrounding a book by Thilo Sarrazin, which many saw as taking positions which were unacceptably close to those of the anti-Islamic movement, many politicians were keen to ride the populist wave.

"Politics has a tough time with the topic," says the Social Democrat Lale Akgün, "because the transition from Islam criticism to anti-Islamic positions is part of a spectrum which reaches right into the centre of society." Akgün describes herself as a "reformed Muslim" who considers that too much political correctness can be "counterproductive."

The integration commissioner in the Bavarian state government, Martin Neumeyer, distances himself from any Islamophobic positions, but he insists that we should not "put criticism under suspicion of being racist." What is for him "unacceptable" is the assumption of a "collective guilt" which one can find in the relevant internet forums.

A feeling of cultural superiority, the accusation that "Taqiya" (Arabic for "deception") is inherent in Islam, the defamation of Islam as a totalitarian ideology, and the refusal to recognise its character as a religion: all these generalisations could lead to what Neumeyer calls, "dangerous fantasies, similar to those found in anti-Semitism." He warns against permitting areas on the internet where the law does not reach, and called for incitement to be firmly condemned, "whichever side it comes from".

The media have played an ambivalent role, and have also contributed to the prevalence of anti-Islamic feeling. Reporting is not always done in such a way as to deliver objective information and avoid stereotypes.

The sociologist and theologian Karl Gabriel of the University of Münster has examined the attitudes of leading figures in the media to religion. His 2011 study "Religion among Opinion-Formers" comes to the conclusion that there have been a "strengthening of cultural Christianity" and an attitude of "cultural defence" towards Islam which have had a considerable influence on the mainstream media of the country.

That leads the media to use Christianity as "an element in the defence of the culture," which Gabriel sees as "a source of conflict with Islam." Religion becomes "a crutch for a contested identity" – at a time when globalisation is encouraging fears of a loss of one's own identity.

It was such fears which the "Pro-" movement in North Rhine-Westphalia exploited when it used the campaign slogan "Keep the West in Christian hands" during the state election in 2010. But groups like the "Pro-" movement and "Die Freiheit" are still of marginal importance in the politics of the country. "Pro-Deutschland" won just 1.2 percent of the vote in December's Berlin state elections.

It's true that in Cologne, there are five members of "Pro-Köln" in the city council, but they have been met with considerable protest. Altogether, though, the political and social debate over the issues is only now beginning. "It doesn't help to make appeals," says Lale Akgün. Even if it's an arduous task, "we have to win over the majority in society so that it is prepared to distance itself clearly from the radical enemies of Islam."

﻿Translated from the German by Michael Lawton

Recent efforts to rehabilitate Assad are setting a damaging precedent for accountability, just as the international community is expressing the need to hold Russia to account for ... END_OF_DOCUMENT_TOKEN_TO_BE_REPLACED

Nouara may be 65, but she is ready to join thousands of others who burn their ID and pay traffickers for the chance of a new life in Europe. Zineb Bettayeb reports END_OF_DOCUMENT_TOKEN_TO_BE_REPLACED

Education for girls and women is still possible in Afghanistan, says Reinhard Eroes of the Kinderhilfe Afghanistan initiative. In interview with Elisa Rheinheimer, he talks about ... END_OF_DOCUMENT_TOKEN_TO_BE_REPLACED

Locals in the Middle East have said European critics are showing bias and hypocrisy when they condemn Qatar. Observers agree that Qatar has had to deal with more criticism than ... END_OF_DOCUMENT_TOKEN_TO_BE_REPLACED

In Doha, Arabs from Morocco, Tunisia, Egypt and Algeria are gathering to celebrate the first ever FIFA World Cup to be held on Arab soil. The criticism from Europe? Over the top, ... END_OF_DOCUMENT_TOKEN_TO_BE_REPLACED
Author:
Claudia Mende
Date:
Mail:
Send via mail

END_OF_DOCUMENT_TOKEN_TO_BE_REPLACED
Social media
and networks
Subscribe to our
newsletter