Schooled For a House of Islam

Noor Huda Ismail had visited an Indonesian madrasah where he was asked to join the radical Darul Islam movement. Ismail chose a secular life instead; he is, however, an intimate expert on the clandestine organisation 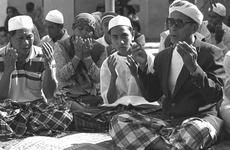 Noor Huda Ismail, who today works as a journalist, says that even outside of class, the environment fostered development of a singular Islamic identity. Other kinds of influences were excluded

​​The word that describes the goal of Islam – creating a house of Islam – is also the name of an Indonesian organization whose aim has been to turn the country into a house ruled by Allah's law, shariah. As a student in one of Indonesia's famous Islamic schools, I had a close encounter with the group, Darul Islam, and their philosophy. I have since adopted the life of a secular Muslim, and for me, Darul has lost its punch. But I fear that indiscriminate persecution of the splintered group might re-energize the group and signal trouble for Indonesia and the region.

My Islamic studies started in 1985, when I was 12. My father brought me to Al Mukmin Ngruki, one of thousands of Islamic boarding schools around the country. After six years of study, I opted for different schooling and a career in journalism. Several of my fellow students, however, made a different choice – one which made my school famous: Dozens of Ngruki's alumni have been accused of taking part in a wave of terrorist attacks against Westerners in Indonesia in recent years.

Leave-taking with a special parting message

Still, reflecting on my time at Ngruki, I realize that what is more shocking is that more of us didn't turn to extremism. The school sought to instil a singular message of Islamic identity at the expense of others, and the parting message to us was to join the clandestine Darul Islam organization.

Even outside of class, the environment fostered development of a singular Islamic identity – to the exclusion of other influences. We never sang Indonesian national anthem; the only music we heard at the school was nasyid, Arabic religious songs, from loudspeakers in the corners of the school buildings. The wall hangings that adorned our Spartan dormitory had Arabic calligraphies, such as, "Live as a noble man or die as a martyr."

In classes, the message was even clearer. In our Thursday night public speaking class, the favorite topic often was "Islam under threat." We listened to the verse of the Koran that says that the infidels and Jews will never stop fighting us until we follow their religion. Our teachers did not recognize the secular state of Indonesia; they said there was no obligation for us to obey Indonesian law. They quoted the Koran: "Whoever does not follow God's law is an infidel."

But it was ultimately during my final year that I learned about the importance of solidarity among Muslims, and a driving force behind the Islamic statehood movement. One of the teachers, an expert in Chinese martial arts named Abdurrohim (alias Abu Husna), said to us, "A Muslim must be in an Islamic group called Darul Islam." Some of the graduating students, myself included, took an oath of membership in the group, a clandestine movement devoted to establishing an Islamic state.

Derived from the Arabic word Dar Al Islam, the term literally translates as "the abode of Islam" or "house of Islam" – a reference to the Medina community founded by prophet Muhammed. Over more than five decades, Darul has spawned many offshoots and splinters who committed violent acts in the name of jihad. In fact, it is impossible to have a clear and comprehensive understanding of all jihadist movements without looking at the dynamic and complicated development of Darul Islam.

Various incarnations of the group have been involved in rebellions since the mid-20th century. Sekarmadji Maridjan Kartosuwirjo started an indigenous Islamic rebellion on August 7, 1949 – just when Indonesia was gaining independence from the Dutch colonial rule.

Disappointed with the newly formed Indonesian Republic headed by Sukarno, Kartosuwirjo proclaimed his own Indonesian Islamic State (NII) in opposition to the Jakarta's central government. Areas of West Java under NII control were called "Darul Islam." An estimated 15,000 to 20,000 people died during the ensuing thirteen-year rebellion, which was finally crushed in 1962. Kartosuwirjo was captured and executed by a firing squad. But that was far from the end of Darul Islam.

Unlikely liaison with the CIA 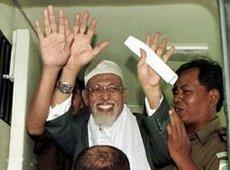 Abu Bakar Ba'asyir, the radical Islamic cleric, supposedly the man behind the 2004 "Bali Bombing" was prematurely released from prison on 3 March 2005

​​After the overthrow of the Sukarno regime, the fortune of Darul Islam turned. Virulently opposed to the godless Communists, Darul veterans played a strong role in the fight against communism, from the mid-1960s through the 1980s. All Islamic organizations, including Darul Islam, enthusiastically backed the CIA-orchestrated coup (from 1965 to 1966) that installed the Suharto dictatorship – and which resulted in the massacre of an estimated 500,000 Communist Party members, workers, and sympathizers.

The December 1979 Soviet invasion of Afghanistan galvanized Muslims all over the world, including those in Indonesia. Thousands of Indonesians fought in the war, of which Darul Islam sent 360. Some of these people would later emerge as the fighters of a pan-regional group Jamaah Islamiyah, responsible for major terrorist attacks in the region, including the Bali blast that killed 202 people, most of them foreigners. (The alleged leader of the group, Abu Bakar Ba'asyir's jail sentence was cut in 2005.)

As with Osama bin Laden, whom the CIA had backed during his anti-Soviet jihad in Afghanistan, Indonesia's Islamic fighters also benefited from an alliance of convenience with America – only to emerge later as the sworn enemy of their one-time Western ally and Indonesia's secular government.

Today, the objective of Darul Islam remains the same as its initial purpose: to establish an Islamic state in Indonesia. But they claim that they would never dream of using violence to achieve the goal. Non-Muslims are not the enemy, they say; rather, the enemy is the state ideology of Pancasila – a mere creation of humans. Darul leaders claim to seek the establishment of a state with shariah law by peaceful means.

After my graduation from Ngruki, some Darul members approached me to attend more classes on the faith and donate 2.5 percent of my income to the organization. But I drifted away: Like the majority of my fellow alumni, I opted for a successful career in the secular world. In our daily lives, we have to acknowledge a pluralism that is not consistent with a strict interpretation of Islam. In fact, of the 88 percent of Indonesians who are Muslim, most lead secular lives.

Despite my mixed family background, I remain a Muslim who prays five times a day, reads the Koran and hopes to visit Mecca. But at the same time, I have worked for the American media, hosted Jewish American friends in my home, and spent Friday nights in bars having drinks.

Though the Darul Islam as an organization may not be as much of a threat today – it is fragmented, disorganized – its call resonates with poorly educated, marginalized people in impoverished areas. And in that vein, Darul Islam can be a fertile ground for terrorists to recruit members of different splinter groups who want to put into practice the teaching of jihad.

And as recent events have shown, a tiny group of people can create an enormous amount of damage. The fact that Darul Islam adherents share the same objective as Osama bin Laden or Europe-based terrorist groups – to create a new Dar al Islam and a new Caliphate – remains a matter of global concern. However, to carry out arrest of current Darul Islam members without hard evidence could turn the targets of pressure into heroes with Muslim community.

© Yale Center for the Study of Globalization 2005

Noor Huda Isamil is a research analyst at the International Center for Political Violence and Terrorism Research, and the Institute of Defence and Strategic Studies, Nanyang Technological University, Singapore.

Debate on Islamic Terrorism in Indonesia
Jihad Misunderstood?
A video containing admissions by three of the suicide bombers who perpetrated the Bali attacks of 1 October has triggered a long-overdue debate amongst Muslims in Indonesia about Islamist terrorism. Bettina David reports

END_OF_DOCUMENT_TOKEN_TO_BE_REPLACED
Social media
and networks
Subscribe to our
newsletter