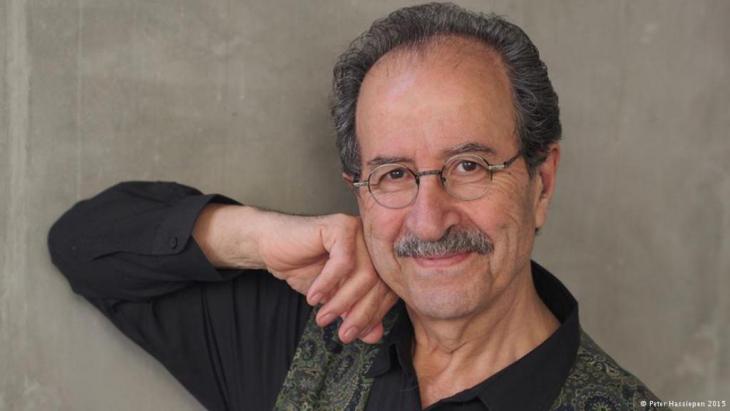 Rafik Schami on integration
″To the haters, they′re all faceless Muslims″

In this article, the Syrian-German writer Rafik Schami outlines his idea of integration and hospitality.

The Germans, according to Schami, are strangers in their own land. But it didn′t take foreigners and refugees to create this situation: many Germans already had a dysfunctional relationship with their country.

Being afraid of what is foreign isn′t a sin itself, says Schami – and it certainly isn′t racism. You just have to talk openly about the fear. The racists are the people who stigmatise foreigners.

The cloak of invisibility

The professional scaremongers use Islamophobia as a cloak of invisibility to hide their racist attitudes. The aim of the word is to stoke the hatred of foreigners – most recently refugees, Muslims. No matter whether they are first, second or third generation immigrants, or have been living in Germany for 50 years, peacefully contributing to the civilisation of this country; whether they work down the pits, on the production line, cleaning buildings, or if they design and build houses, work in front of or behind the camera, sing, paint, compose or tell stories; whether their work takes them on stage or to patients′ bedsides.

To the haters, they are all faceless Muslims. Now let′s take just five minutes to put ourselves in the position of a peace-loving person in this country, who just happens to belong to the Muslim minority. Despite all the decades he has spent here, he is treated to a defamatory slap in the face, whether it be a silly cartoon that shows his Prophet with a bomb in his turban, or the tirades of Thilo Sarrazin and his defenders Udo Ulfkotte and Peter Sloterdijk.

The haters′ constant defamation of Muslims is increasing the number of Muslims who don′t feel accepted in this country. It is a bitter feeling to be publically defamed after so many years, without a judge bringing charges against those unleashing the tirades of hatred. So what does the average Muslim, who has never been an Islamist, do?  He becomes defensive, uninterested in German society and prepared to adopt a fundamentalist philosophy, thus helping him to understand in a fairly cool and pseudo-rational way why the Germans hate him.

The headscarves are less a success on the part of the fundamentalists than a failure by our society to protect and integrate this minority. For more than 20 years Turkish and Arab women in Germany didn′t wear headscarves, or wore them only occasionally. The foreigner is not to blame for xenophobia; the blame lies with the people speculating about mistakes he hasn′t made yet.

We could garner huge support from our Muslim citizens in helping to integrate the refugees who have been granted asylum here. But no, that′s too complicated for the old rabble-rousers. Foreigners out! That′s their facile conviction. The hater of Muslims and the anti-Semite are both striving for one goal: the exclusion of a heterogeneous group from ″respectable society″ which is under threat, as if they were dealing with a vicious mob. The anti-Semites use the Talmud and the Muslim-haters use the Koran as a witness to their wickedness.

Fariduddin Attar’s "The Conference of the Birds", one of the seminal works of Islamic mysticism, has recently been published in sumptuously illustrated German translation. It ... END_OF_DOCUMENT_TOKEN_TO_BE_REPLACED

Egyptian authorities have Mada Masr in their sights once again after critical reporting. But the editor of the country's last independent news source is adamant they will continue ... END_OF_DOCUMENT_TOKEN_TO_BE_REPLACED

Like Christianity, Europe's history is one of migration. Both have strong roots in the Orient and in cultures thousands of years old. Cultural historian Bernhard Braun invites us ... END_OF_DOCUMENT_TOKEN_TO_BE_REPLACED

Mohamed Abla is the first visual artist from Egypt to be awarded the Goethe-Institut’s Goethe Medal, Germany’s highest honour in the area of foreign cultural policy. Stefan ... END_OF_DOCUMENT_TOKEN_TO_BE_REPLACED

Bachtyar Ali sends the hero of his latest novel – "Mein Onkel den der Wind mitnahm" – literally flying. Jamshid is so thin after his years as a political prisoner that a gust of ... END_OF_DOCUMENT_TOKEN_TO_BE_REPLACED
Author:
Rafik Schami
Date:
Mail:
Send via mail

END_OF_DOCUMENT_TOKEN_TO_BE_REPLACED
Social media
and networks
Subscribe to our
newsletter