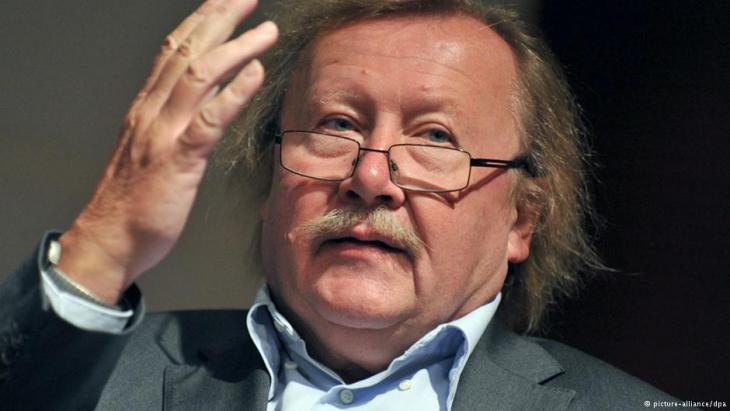 "Islamophobia is acceptable anti-Semitism": the Syrian German writer Rafik Schami has accused German intellectuals of fomenting Islamophobia. Sloterdijk and Safranski are too cowardly to really grapple with the Arab culture. The fact that ″these bigots″ attempt to disguise their anti-Muslim sentiments in a cloak of concern for the German Jewish community makes it all the more preposterous

Of course, this is meant ironically. Mr Sloterdijk can′t even reform himself. The ex-left-winger, ex-Bhagwan follower, ex-preacher of human selection (Rules for the Human Zoo), ex-economic neoliberal and now, for a short period, since it′s in fashion, expert on Islam, says that Islam is ″incompatible with a modern state and a modern society″ (kath.net KAN). Anyone who says such a thing has no concept of history. It is ahistorical. It was this same Islam that produced one of the most wonderful civilisations. The reasons for its crisis are multifarious and Europe has played a part in them. But instead of an analysis, Mr Sloterdijk gives us some more sales patter. So history and research have never interested rabble-rousers? Not when you have a handy, hollow metaphor, which rings all the louder because of its hollowness. Herfried Munkler: ″The dance of the metaphors performed by this type of public intellectual has functioned above all as a barricade to learning. Sloterdijk has taken refuge in all kinds of linguistic imagery to save him the trouble of familiarising himself with the relevant research. This way, he could talk about anything without knowing the precise details.″

But how is that our spokespeople can fall so far? Herfried Munkler gave an answer in the same article (″Die Zeit″, 12.3.2016): ″as long as the Federal Republic was a player without a larger political arena and political agency, it could afford to have this type of public intellectual without suffering any consequences... But since Germany has become a central player in European politics, that is no longer the case.″

The old gentlemen are intensely preoccupied, almost like theologians, with the weaknesses of Islam. They are eager to demonstrate the characteristics of Islam that prevent it from gaining a foothold here in Europe. Why does Islam have to adapt to Europe? These attacks from outside drip with arrogance and can only lead to resistance. Such arrogance, combined with the insults against Islam permitted all over Europe, is certainly not going to lead to the reform of Islam.

No, a society, a religious community cannot be reformed by assaults from without; they will only put it on the defensive. Reform has to come from within. In all societies this always has been and always will be difficult and involve great sacrifices. What we can do is support liberal forces and have patience.

The Chinese are coming!

I don′t want to frighten anyone, but at this point it seems appropriate for me to make readers aware that our world is racing towards its own end because of an absurd characteristic of humanity. I know, I know, what I′m saying is nothing new. Many scientists know it and many more logically-minded people suspect it.

One of these absurd characteristics of humanity is that nothing in the world satisfies us more than power and cash. No animal would ever consider destroying its existential basis, just so 70 of its species could own half the world. But 70 men do. Humans are so stupid that they don′t even stop to think what their grandchildren and great-grandchildren will inherit: junk, filth, felled forests and ruined soil, disease and war that nobody can hide from any more.

This is not a propaganda exercise, but the introduction to a terrifying vision of natural and environmental catastrophes that is currently circulating. I suspect that the first great blow will fall in China. I wrote as much more than a decade ago; things are produced incredibly cheaply there, and that only works when you don′t give the slightest consideration to nature. So the next refugees will be environmental refugees, the majority of them quite possibly Chinese. And what will Mr Sloterdijk write on his Chinese laptop, which could not have been invented without the Arabic zero?

That Buddhism and Taoism are good for nothing and unsuited to a modern society; that the Chinese are soon going to flock together anyway and build a parallel society with mafia-style triads, which will extort money from the wealthy old gentlemen of the ″Tumult″ circle? And what harmonies will Mr Safranski′s second choral part sing in the ″NZZ-Sonntagszeitung″? That the Chinese have no idea how to live with Christians; that they letch over blonde women and will start hunting dogs, because of course they love dogs...for dinner?

Education is the key to the future. Muzoon Almellehan has known this since she was 14 years old. But she lives in a Jordanian refugee camp. And since then she has been fighting ... END_OF_DOCUMENT_TOKEN_TO_BE_REPLACED

Michael Frey has written a fascinating book about the contemporary political thinker Nassif Nassar. Since 1967, Nassar has devoted his life’s work to the question of a fair social ... END_OF_DOCUMENT_TOKEN_TO_BE_REPLACED

The Kurdish YPG militia did the heavy lifting in the fight against the "Islamic State", yet many foreign YPG adherents, including Germans, have come home to find themselves under ... END_OF_DOCUMENT_TOKEN_TO_BE_REPLACED

Few Muslims have to date visited the Auschwitz-Birkenau concentration camp memorial site. Now high-ranking representatives of Muslims and Jews are travelling together to the place ... END_OF_DOCUMENT_TOKEN_TO_BE_REPLACED

The terror attacks in Paris, Brussels and Berlin were all carried out by men radicalised in jail. In Germany, politics and the judiciary are trying out new approaches to prevent ... END_OF_DOCUMENT_TOKEN_TO_BE_REPLACED