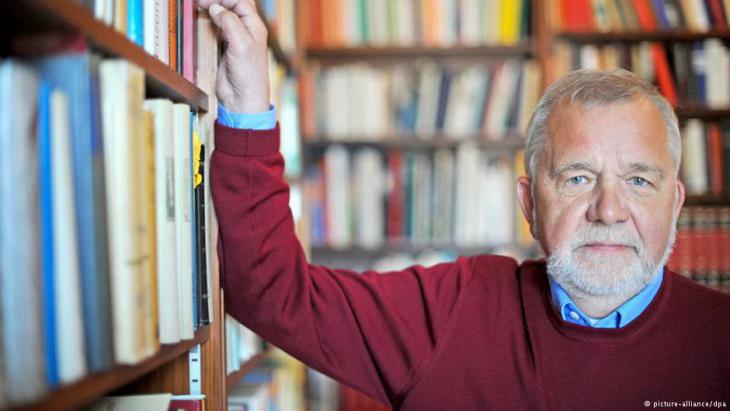 Head to head over the refugee crisis: Rudiger Safranski has frequently criticised Chancellor Merkel′s refugee policy. In the "Neue Zurcher Zeitung" dated 8.11.2015, he accused ″the Germans″ of pubescent behaviour, saying, ″they see themselves as saviours of the persecuted and the lost; they have sacrificed the ethics of responsibility on the altar of ideology"

On my tour through hundreds of cities, I read and noted down a lot of things about the ″refugee crisis″. I saw posters from the right-wing Alfa Party, depicting a dark-haired, bearded man about to rape a white woman. This is the visual translation of Safranski′s statement: ″The young men bring their macho behaviour, their violence, with them, which is bad for everyone, but particularly for women″ (″NZZ am Sonntag″). This is horror kitsch!

You can′t enlighten old gentlemen. If you prove that one of their statements is false, they′ll pull the next prejudice out of their waistcoat pocket and when there′s nothing left, they start on the lechery of foreigners. It′s a prejudice, but it is one through which the old gentlemen project their fantasies and repressed desires onto foreigners.

Taking the path towards integration together is not simple; even with goodwill on both sides, integration is no piece of cake. It is tough and in the long term wreathed in problems and studded with setbacks. It demands a steady nerve from everyone involved and the kind of patience that would make a camel look hysterical by comparison.

In the end, perhaps when our great-grandchildren are in charge, a wonderful reward awaits: a vibrant, peaceful society. If it works, my earthly remains will rejoice and fertilise many little thistles: the thistle-loving goldfinch is my favourite song bird. And like the refugees, it is also under threat.

The great chasm between knowledge and wisdom

Those who claim to have knowledge have no advice for politicians, for helpers and certainly not for refugees. Only then, even if they were wrong, would they be intellectuals in my eyes. No, they don′t have a single wise word, sensible or sympathetic, let alone spoken out of love. Instead, they react cynically from the distance of their regular place at the bar.

It is a remarkable observation that the majority of these cynical regulars used to be radical left-wingers. Now, when for once the people are showing a will to be politically active and behave in a humanist way, having learnt from history, these waistcoat-pocket Stalinists have become complacent and cross – their provincial nature revealed in their verbose paralysis and hostility towards other cultures.

The boundaries of reason lie where reason misleads us into opportunism and cynicism. And this is not uncommon in times of crisis. Only a courageous love can have any effect, one that does not shy away from any victim, one that gives to others without reason or calculation, one that makes it possible to overcome crises and builds a bridge across the chasm between knowledge and wisdom.

Why I have a special radar for xenophobes

I was born into an historical double minority – an Aramean among Arabs and a Christian among Muslims – and through my exile I have become part of a third, modern minority: foreign in Germany.

A member of a minority (let′s say a Catholic Italian or a Sunni Syrian) who has gone into exile, be it as an economic migrant, exile or refugee, spends a long time feeling blind and confused in his new surroundings. He doesn′t have millennia of practice doing this behind him. A member of an historical minority gets into the swing of things much more quickly. He will, for example, never ally himself with xenophobes against foreigners, unless his brain has been reduced to a pile of shit. My observations over 45 years confirm this. I know of a few sad cases that it repulses me to recount.

It is not exaggerated politeness but history that forces me to praise those majorities who have treated their minorities well despite any problems. The Germans have no need to hide. They have at least been living peacefully with their minorities for over 50 years. But nor does the Muslim majority in my country of origin, Syria, which allowed us to live despite 200 years of crusades. I would like Messrs Sloterdijk, Safranski, Ulfkotte, Jirgl, Bockelmann etc. to give me a Christian counter-example. Let′s say a French minority who survived the First World War in Germany. Oh, there isn′t one? Hard to find? A German quarter in Moscow or Leningrad, or a German village nearby? No?

You don′t have to read Herta Muller to see how miserable things were for the European minorities during and after the war. History is my witness.

What does a member of an historical minority learn from a young age? He learns that somebody who hates foreigners hates people in general. And nobody can convince him otherwise, even if he is alone in this opinion.

On the article and its author

Rafik Schami, born in Syria in 1946 and resident in Germany since 1971, is one of Germany′s most successful authors. His latest book ″Sophia″ is published by Hanser. His novel ″Eine Hand voller Sterne″  (A hand full of stars) was named ″Book of the City″ for Cologne and the surrounding region in 2015.

Schami′s title for the article published here was ″Fremder unter Fremden″ (Foreign among foreigners). His inspiration: an interview he gave for the ″Kolner Stadtanzeiger″ in March. These are the first few pages of a manuscript that he plans to publish in book form in the autumn.

The work will be in three parts: the first dealing with hospitality and Islamophobia, the second with literature in exile and the third a retrospective on Schami′s life. (ksta)

Education is the key to the future. Muzoon Almellehan has known this since she was 14 years old. But she lives in a Jordanian refugee camp. And since then she has been fighting ... END_OF_DOCUMENT_TOKEN_TO_BE_REPLACED

Michael Frey has written a fascinating book about the contemporary political thinker Nassif Nassar. Since 1967, Nassar has devoted his life’s work to the question of a fair social ... END_OF_DOCUMENT_TOKEN_TO_BE_REPLACED

The Kurdish YPG militia did the heavy lifting in the fight against the "Islamic State", yet many foreign YPG adherents, including Germans, have come home to find themselves under ... END_OF_DOCUMENT_TOKEN_TO_BE_REPLACED

Few Muslims have to date visited the Auschwitz-Birkenau concentration camp memorial site. Now high-ranking representatives of Muslims and Jews are travelling together to the place ... END_OF_DOCUMENT_TOKEN_TO_BE_REPLACED

The terror attacks in Paris, Brussels and Berlin were all carried out by men radicalised in jail. In Germany, politics and the judiciary are trying out new approaches to prevent ... END_OF_DOCUMENT_TOKEN_TO_BE_REPLACED