Filming the Margins of Iranian Society 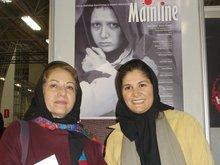 ​​Many observers assume that it will become increasingly difficult to produce films with contentious social and political messages under the new conservative Iranian government. But Rakhshan Bani-Etemad remains determined to complete her new feature film "Mainline" ("Khunbazi" in Persian) as planned.

"No matter how the situation develops, I will carry on with my work because I'm convinced that we can continue working toward our goals," says Bani-Etemad. "The decision makers cannot change my values. I will do everything I can to remain true to myself as an individual."

In her internationally acclaimed films, Rakhshan Bani-Etemad often deals with controversial issues in Iranian society such as poverty, crime and forbidden love. She focuses on society's underprivileged who find themselves in desperate situations because of their cultural or socio-economic status.

"Mainline" deals with the issue of drug addiction. Before her wedding, Sara (played by Bani-Etemad's daughter Baran Kosari) has to overcome her heroin habit before her wedding, so her mother brings her to a drug rehabilitation clinic. These sequences set the stage for a film shot in the neo-realistic tradition, showing how hopelessness and economic misery have driven an increasing number of young people to drug abuse.

"Drugs are a problem in every country around the world," says Bani-Etemad. "But since two thirds of the population of Iran is under the age of 25, I see drug addiction in our country as an extremely alarming crisis."

Born in Teheran in 1954, Bani-Etemad studied film before she went to work for the national television in the 1970s. In 1987, she made her first full-length feature film, "Off the Limits" ("Kharej az Mahdudeh"), a satire on Iranian bureaucracy.

Her big international breakthrough came with "Nargess", the story of a love triangle between the aging thief Afagh, the young Nargess, and the unemployed Adel, who leads a life of petty crime. The film was honored with the coveted best director award at the 1992 Fadj Festival.

This was followed in 1995 by "The Blue Veiled" ("Rusariye Abi"), a film about love and taboos. Rashul Rahmani, an affluent farmer and aging widower, falls in love with one of his workers, Nobar, breaking with social conventions and shocking his family. With this film, Bani-Etemad won the Bronze Leopard at the Locarno Film Festival.

Although Bani-Etemad takes a critical view of the Iranian government and has received awards in Western countries – by Western standards, she is not your archetypal liberal filmmaker. For example, she has made decidedly critical comments on the permissiveness of European and American films.

Focusing on women and politics

In addition to feature films, Bani-Etemad is a documentary filmmaker. Her two-part film "Our Times" ("Ruzegar-e ma") reports on young activists, women and men campaigning for a continuation of the reform process during the 2001 presidential elections.

The second part of the film focuses on Arezoo Bayat, a 25-year-old divorced single mother who has to support her blind mother. She loses her job and, to make matters worse, is evicted from her apartment. Despite all these hardships, she decides to run for president, but during the political review process, her candidacy is rejected.

Rakhshan Bani-Etemad follows and films Arezoo Bayat everywhere she goes, and captures some heartbreaking scenes that illustrate the main problem in Iranian society today: the severe economic hardships faced by many people and their endless struggle to survive in a huge city.

Cinematographic elements typically found in documentary films can also be observed in "Under the Skin of the City" ("Zir-e poost-e shahr", 2000) and "Mainline". Bani-Etemad's directing evokes a distinct sense of authenticity, primarily created by hand-held camerawork that captures the people and the action.

The feature film "Under the Skin of the City", a runaway success in Iran, essentially deals with the topics of hopelessness and poverty. Once again, Bani-Etemad produces a film that focuses on a social misfit: Tooba, a textile worker who loses her home and family. Her son Abbas, desperate for a visa to go work in Japan, is cheated by a bunch of crooks, and takes on a job smuggling drugs.

Bani-Etemad's most recent feature, "Gilaneh", made its international premiere in 2005 and was acclaimed by critics around the world. In the first part of the film, set in 1988, Saddam Hussein's bombs fall on Teheran as Gilaneh's son Ishmael marches off to the front. In the second part, in 2003, American forces blast Baghdad while Gilaneh nurses her son, now a helpless invalid.

The films made by Bani-Etemad in recent years have focused time and again on women who have been left washed up and abandoned by society, like the presidential candidate Arezoo Bayat, the poor textile worker Tooba, and the care-worn Gilaneh.

Nevertheless, Bani-Etemad refuses to be classified as a feminist director. She says that her approach is much broader: "My films should not be interpreted from a 'gender' point of view. I deal with the social problems and difficulties faced by both women and men in society."

Iran is far more modern than many people realise: our view is clouded by media distortion and the overriding political narrative. The nation’s historic and cultural riches are ... END_OF_DOCUMENT_TOKEN_TO_BE_REPLACED

In August 1978, four men set fire to the Cinema Rex in the Iranian city of Abadan, killing more than four hundred people inside. The event is said to have started the Iranian ... END_OF_DOCUMENT_TOKEN_TO_BE_REPLACED

Iranian director Manijeh Hekmat expected the production of her latest movie to go ahead as planned – but then she found herself having to improvise. The resulting film is more ... END_OF_DOCUMENT_TOKEN_TO_BE_REPLACED

Mohammad Rasoulof's "There Is No Evil" won the main prize at the Berlinale. Maryam Mirza talked to the director, who is currently forbidden from leaving Iran, about his film END_OF_DOCUMENT_TOKEN_TO_BE_REPLACED

With prominent film makers cancelling their attendance, the organisers of Iran's flagship cultural event are under pressure. The Fajr film festival in Tehran shows how culture can ... END_OF_DOCUMENT_TOKEN_TO_BE_REPLACED
Date:
Mail:
Send via mail

END_OF_DOCUMENT_TOKEN_TO_BE_REPLACED
Social media
and networks
Subscribe to our
newsletter