Muslims all over the world are currently observing Ramadan. The month of fasting is supposed to be all about reflection, meditation and abstention - but Ramadan is becoming increasingly commercialised. 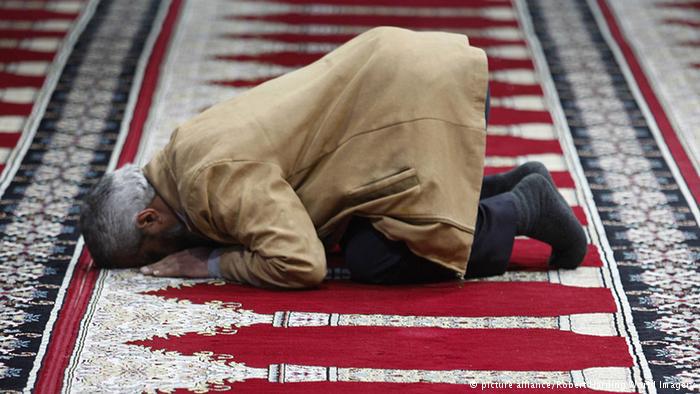 According to the Koran, the Prophet Muhammad received the Book's holy words in the month of Ramadan. During this month, Muslims are supposed to practice abstinence. Daily prayer is compulsory – even for travellers. Islamic prayer rooms have been set up in many international airports, like the one here in Amman. In Germany, you can find these rooms in the airports at Frankfurt, Munich and Dusseldorf 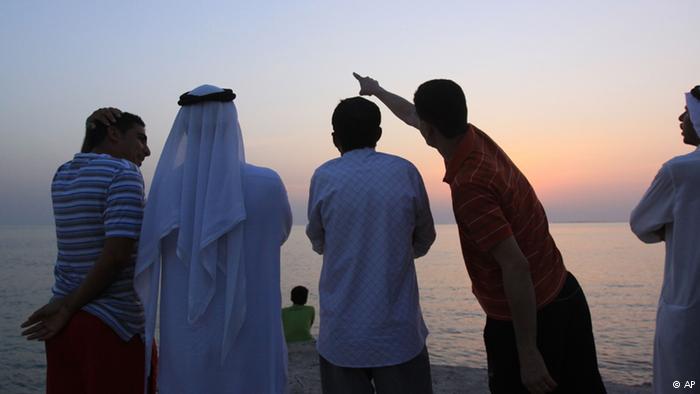 Sunset is the time for "iftar", the breaking of the fast. In Ramadan, the ninth month of the Islamic lunar calendar, Muslims are not supposed to eat or drink between sunrise and sunset. Here, men in Bahrain are looking out for the crescent moon. When it appears, they sit down on the beach to eat, drink and pray 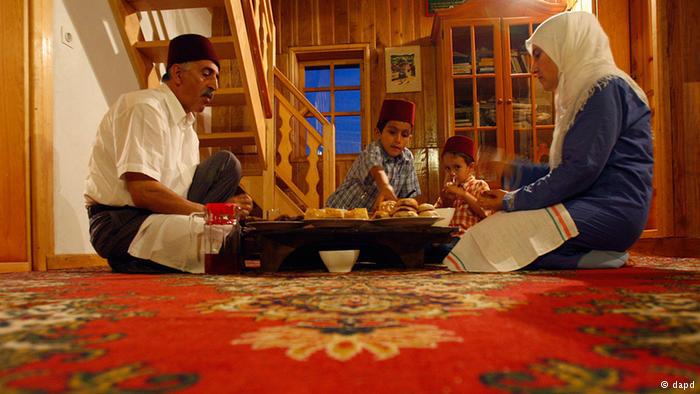 This Bosnian Muslim family celebrate the iftar meal together each evening during Ramadan, often joined by friends and relatives. Strengthening the communal spirit is an essential aspect of Ramadan. Young children don't have to fast. Exceptions are also made for older people, pregnant women, and those who are sick or travelling. Anyone who is able to do so can catch up on their fast later on 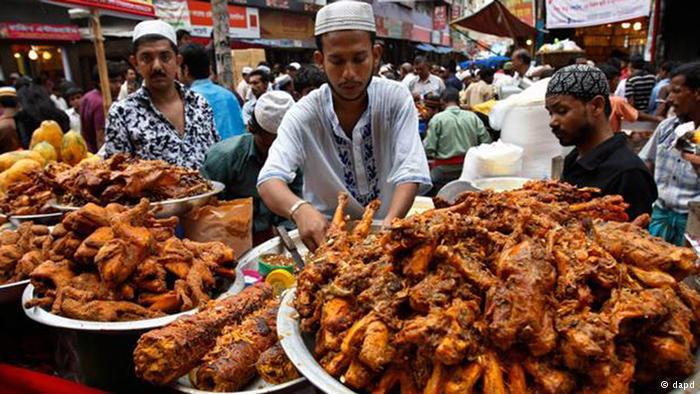 During Ramadan, stallholders at the bazaar in the Bangladeshi capital, Dhaka, sell meat and other food. Because special significance is attached to the nightly iftar meal, prices in the markets of this huge metropolis rise by up to 60 percent during the month-long fast 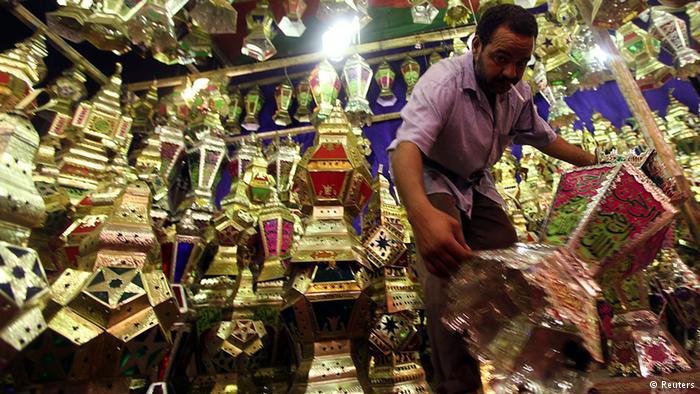 During Ramadan, there is generally a marked increase in spending among the faithful. A lot of people buy not just food but also Ramadan lanterns or prayer rugs. During the fast, traders like this one in Cairo tempt people in with special offers. Restaurants offer iftar menus of several courses for the whole family 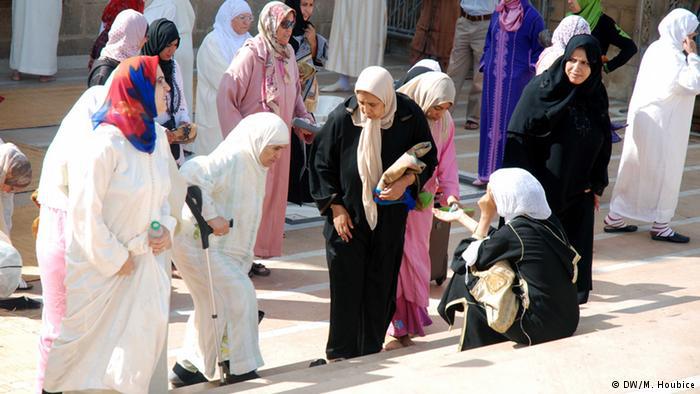 Giving to the poor is part of Ramadan too: sharing food with them and donating money. The giving of alms, as seen here during Eid ul-Fitr in Morocco, is one of the five pillars of Islam - along with profession of the faith, daily prayers, making a pilgrimage to Mecca and fasting during Ramadan 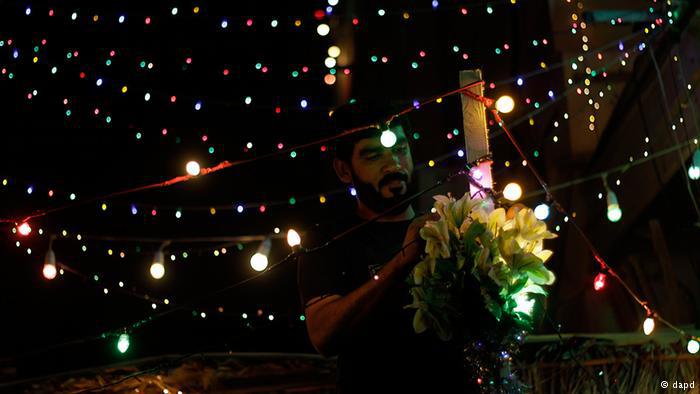 The search for enlightenment: garlands of lights and lanterns adorn many cities and streets during Ramadan, but also private houses like the one here in Bahrain. They symbolise the search for enlightenment along the path of prayer that leads to Allah. People decorate shop windows, and expensive Ramadan adverts are broadcast on television. A lot of Islamic religious leaders disapprove of this 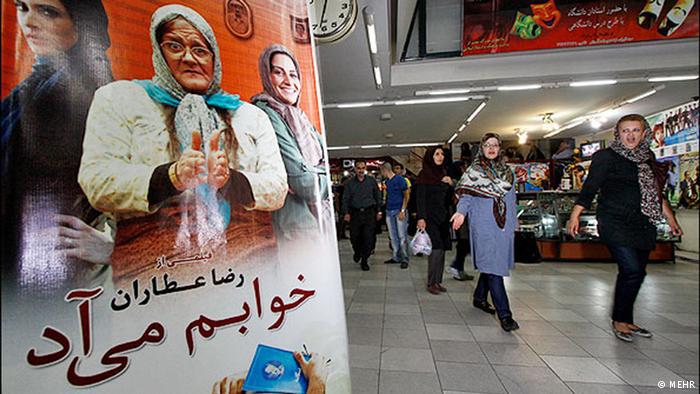 During Ramadan hardly any cafes and restaurants are open during the day. Most towns only come to life after sunset. In Iran, even the cinemas are closed during the day, though this means they are allowed to stay open for longer at night 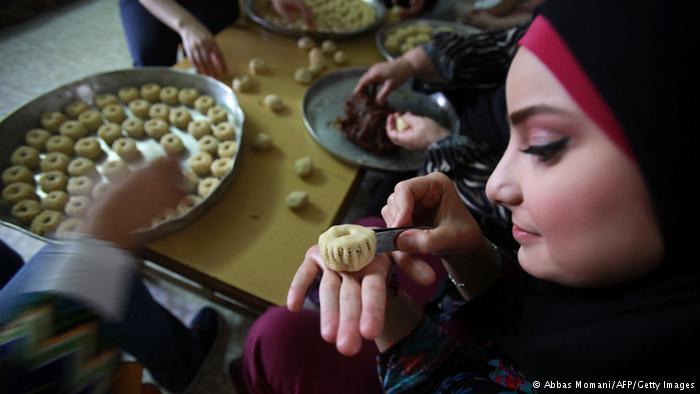 At the end of Ramadan comes the three-day-long "Sugar Feast" of Eid ul-Fitr. Children receive sweets, toys and magnificent costumes. Culinary delicacies are lovingly prepared, like the ones seen here in Ramallah. Prices also fall back to pre-Ramadan levels, and dates and figs are suddenly offered at knockdown prices 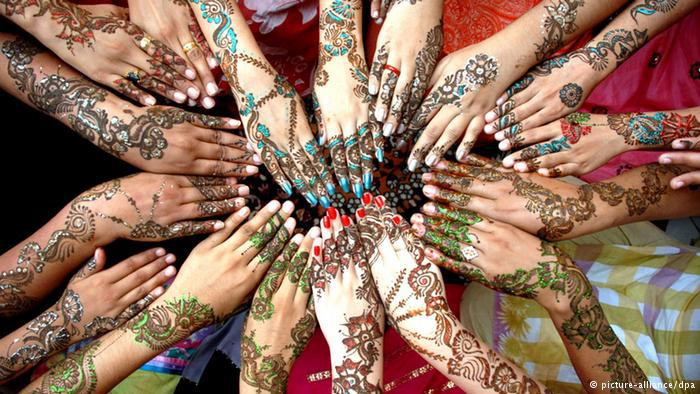 Tattooed artworks: before Eid ul-Fitr, Pakistani girls decorate their hands with artistic designs. They use henna for this body art, which remains visible on their skin for two to three weeks. The colours vary in intensity according to how long the henna is left to work on the skin

END_OF_DOCUMENT_TOKEN_TO_BE_REPLACED
Social media
and networks
Subscribe to our
newsletter