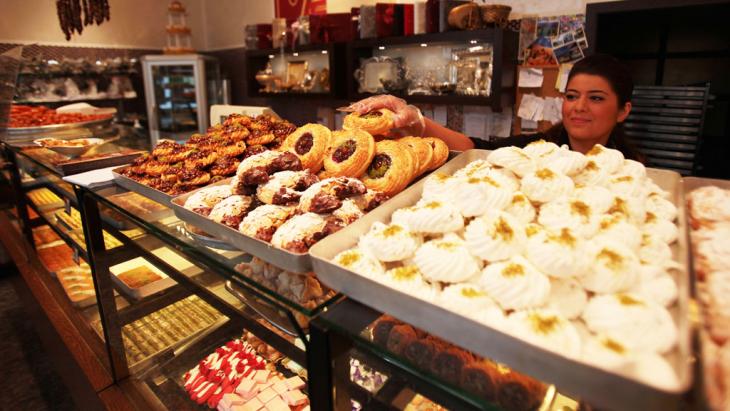 Ramadan for Shopkeepers
Breaking the Fast with Dates and Seafood

Brahim Arrazki looks exhausted. He would be lying if he denied being tired, as he has already been fasting for twelve hours. On a hot day like this, it is particularly difficult to forego eating and drinking from early morning to late evening. Difficult, but not impossible, even when you have to go to work, says Arrazki. "The body's energy comes from the spirit," he claims with certainty.

With his long beard, anyone can see that Arrazki is a pious man. As a practising Muslim, he fulfils his duty to observe the fast during Ramadan from sunrise to sunset as a matter of course, and this irrespective of how many hours lie in between. Many of his customers, who come from Morocco as he does, also observe this religious tradition.

Arrazki runs a grocery shop on one of the side streets of Zeil, the shopping promenade in Frankfurt. His store is not particularly big, but it lacks nothing that his customers need. The refrigerated display cases hold large containers of pickled olives. Right across from the cash register is a temporary shelf with trays full of sweet baked goods. There is also a meat and fish counter. 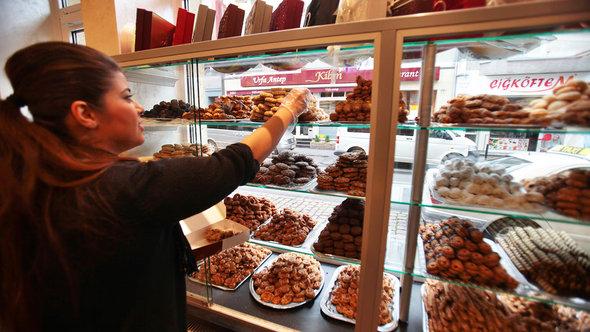 "The body's energy comes from the spirit." During Ramadan it is especially hard for Muslim shopkeepers to keep the fast as they are surrounded by tempting foodstuff from morning till evening, for instance by Turkish delight, as in this case

​​This year, the Islamic month of Ramadan overlaps with school vacation in many German states. For Muslims in the state of Hesse, this is particularly convenient, at least from the perspective of parents with school-aged children. The period of fasting began exactly at the start of the school vacation. This allowed many Muslim immigrants to travel to their homeland for the holy month as well as to spend the three-day festival marking the end of the fast with their relatives.

Muslims from the immigrant community appear to have taken advantage of this opportunity to take a vacation in their homeland. At least this is the impression of Arrazki and other retailers in Frankfurt with many customers from Muslim countries. The morning doesn't see that much business, and "rush hour" only takes place in the afternoon, reports Alim Çoskun. "There are a lot fewer customers."

Although the lack of customers is visible, those who do come, fill their shopping carts far more than usual. "You really feel the hunger when you are in the store," says the shopkeeper, originally from Turkey. The 49-year-old knows what he is talking about. He is also keeping the fast. And by the afternoon, he feels the effects of abstaining from eating and drinking. He is tired, as he begins his workday very early, picking up goods from his wholesaler.

The example of the Prophet

During Ramadan, Arrazki offers a range of products not available for the rest of the year, such as chebbakia, honey-soaked baked goods. The shopping baskets almost always include dates, both dried and fresh. They are extremely popular during the month of fasting, because they are part of the tradition and it is considered a good deed to end the fast by eating a date – as was done during the time of the Prophet Mohammed. 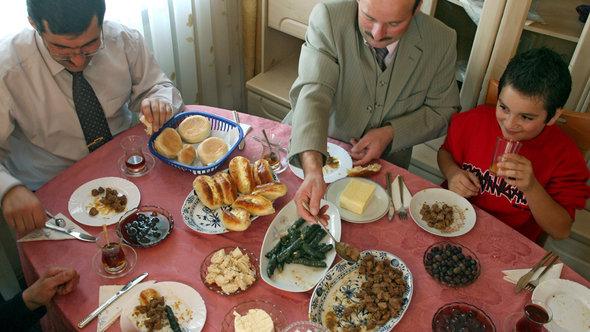 One aspect of the fast month Ramadan this year is particularly inconvenient for practising Muslims – it falls at a time when the duration between sunrise and sunset is at its longest, so the fasting times are extended accordingly

​​In the Alim markets in the district around the train station, dates are also among the goods purchased much more during Ramadan than otherwise. Another popular item is a long flat bread topped with an egg, which a Turkish baker from the Höchst district in Frankfurt only prepares at this time of year.

Unlike in Turkey, where flat bread is only sold during Ramadan, this type of baked good is available in Germany year-round, but not crowned with an egg.

Çoskun runs two grocery shops and a fish store on Münchener Street. He says he sells far less fish during the month of Ramadan than usual. By contrast, the Maghreb shopkeeper on Klinger Street has seen a rise in the sale of seafood. Without a doubt, dates are the fruit that everyone has on their table for the evening meal to end the fast. Otherwise, there is a huge variety in menu among different communities.

Asked what he sells more than usual during Ramadan, Arrazki points to the little bags filled with sesame seeds or fennel. He doesn't have the name of these ingredients in German on the tip of his tongue, but does know that they are used in making sweets. What exactly, he cannot say. His wife is responsible for cooking and baking.

When the 44-year-old closes his shop at 8 PM and drives home, his wife has already prepared everything for the iftar, the evening meal to break the fast. By around 9:30, Arrazki, his wife, and their four children sit at the table to take their first bite in over 17 hours. This is one aspect of the fast month that is particularly inconvenient this year – it falls at a time when the duration between sunrise and sunset is at its longest. The Islamic calendar is lunar based and so Ramadan is constantly shifted by ten days of the Gregorian calendar. This year, the daytime fast is especially long.

Arrazki ends his days during Ramadan with a visit to the Abu Bakr Mosque, not far from his home. In addition to fasting in the holy month of Ramadan, the Muslim community also observes the Teravi, the ritual evening prayer. Ramadan ends on 8 August.

Home
Print
Newsletter
More on this topic
The Islamic Month of Ramadan: A Test of WillpowerRamadan in Germany: A Time for Spiritual Reflection and Self-RestraintDossier: The Holy Month of Ramadan
Related Topics
Islam in Germany
All Topics

Former lawyer Said Haider has invented a chatbot for those seeking advice on anti-discrimination issues – Meta is the first chatbot of its kind in the world. In conversation with ... END_OF_DOCUMENT_TOKEN_TO_BE_REPLACED

Benjamin Idriz, imam of the mosque in Penzberg near Munich, is one of the most prominent representatives of Islam in Germany. He sees his role as building bridges to mainstream ... END_OF_DOCUMENT_TOKEN_TO_BE_REPLACED

Since the German city of Cologne launched a two-year model project to allow Muslim communities to perform the call to prayer, there has been much heated public debate on the issue ... END_OF_DOCUMENT_TOKEN_TO_BE_REPLACED

Germany’s electorate includes some 7.4 million citizens with international roots, while many more millions of residents from abroad aren’t allowed to vote. Both groups are often ... END_OF_DOCUMENT_TOKEN_TO_BE_REPLACED

Muslims in Europe regularly experience threats, witness attacks and are the target of hate across national borders. Now the Council of Europe, the continent's leading human rights ... END_OF_DOCUMENT_TOKEN_TO_BE_REPLACED

On 15 June, the "Islamkolleg" in Osnabruck officially launched its new training programme for imams in German. The college is intended to prepare Islamic theologians for their ... END_OF_DOCUMENT_TOKEN_TO_BE_REPLACED
Author:
Canan Topçu
Date:
Mail:
Send via mail

END_OF_DOCUMENT_TOKEN_TO_BE_REPLACED
Social media
and networks
Subscribe to our
newsletter