Ramadan in Germany
A Test of Faith and Strength of Character

The Islamic month of fasting begins on Wednesday. Most Muslims in Germany observe the holy month – but in an environment where the majority is not Muslim, fasting is something many find difficult. Ulrike Hummel reports 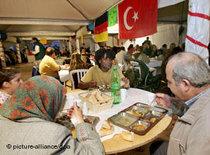 Fasting during Ramadan is intended to teach believers about patience, humility and spirituality. Muslims break their fast at sunset prayer time with a meal called Iftar

​​ For weeks now Germany's four million or so Muslims have been eagerly anticipating the onset of the fasting month of Ramadan. It means no food or drink from dawn till dusk over a period of four weeks – a massive strain on the body. During this time, the fast dominates daily life in Islamic countries.

Towns and villages are garlanded with lights while the market stalls, piled high with fruit and vegetables and other mouth-watering goodies, become livier and more bustling than usual. In especially hot regions work is carried out at night, and snack bars and restaurants open for business only after the sun has set.

Harder to hold out

For Muslims in the West, fasting provides a particular challenge. As members of a religious minority, it is a challenge that not all of the faithful are ready and willing to take on.

Azima Moustafa und Haidar Omar have lived in Germany for 13 years. As Syrian Kurds they faithfully observed Ramadan every year in their homeland. Now, however, they find it increasingly difficult to do without food and drink in the fasting period. 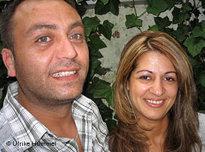 Struggling with religious obligations and the distractions of mundane life: Haider Omar and Azima Moustafa

​​ "I fasted every year in Syria. I managed to keep it up in Germany, too, until recently. Last year I only managed to hold out for a couple of days," says Azima Moustafa. A Ramadan that falls in the summer months leaves Muslims facing long hours of daylight until the fast can finally be broken. With her asthma being made worse by the heat, Azima preferred to leave off fasting.

Haidar Omar gave up fasting years ago. "Of course, I fasted in Syria, but since I came here I can't do it anymore. I work in the dry construction industry, it is hard physical work and you are thirsty all the time. To be able to keep the fast I would have to stay home for a whole month – easier said than done."

The 38-year-old construction worker is well aware that his employer cannot afford to be without any of his workers during the peak period.

It will be difficult this time, too, for the 31-year-old Azima. As mother of two children and with her own fashion boutique in Cologne to run, she is kept busy from morning till night – employing help is out of the question at the moment.

Seeking strength in the mosque

Azima also misses the sense of community and togetherness from which the faithful can draw strength in Muslim countries. In Syria she would be able to hold out, of that Azima is positive. 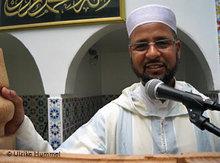 Extra congestion during Ramadan: Abdelwahab Alioui, imam at the Al-Qods mosque in the city of Krefeld

​​ Muslims in Germany look to their mosques to provide them with the strength and sense of community to see them through moments of weakness and struggle. Abdelwahab Alioui is imam at the Al-Qods mosque in the city of Krefeld. He knows full well that this year, as always, he will see many of the old occasional faces.

"The mosque is much busier during Ramadan than at any other time – men and women, old and young, parents and children. For us imams it is a chance, too, to remind the faithful of their other religious obligations. That is, not to insult others, not to tell lies to or to steal from them, irrespective of which religion they follow," he says.

Whereas Haider and his wife Azima are forced to face up to their physical limitations during Ramadan, Mohammed Al-Ibrahim spends weeks in advance preparing himself mentally for the fasting period. The 42-year-old doctor who lives in Cologne has been observing Ramadan faithfully for the past 20 years. The Kuwaiti does find life in Germany a challenge however – and not only due to fact that the takeaways and restaurants are all open.

"I see other people eating and drinking, I walk past snack bars and takeaways and smell all the wonderful aromas. It stimulates the appetite and makes you more aware that you are hungry. But it is finding the will to resist female charms, particularly in summer, that is the real challenge." Ramadan is not only about renunciation of food and drink; smoking and sex are taboo also until the fast is broken in the evening.

Muslims practice four weeks of self-restraint. Of course there is a religious purpose to this but through the deprivation of food and drink, the fasting is also meant to make its adherents aware of the sufferings of the poor. Even the rich should be made to experience hunger, and a donation for the poor is an obligation for every Muslim during Ramadan. 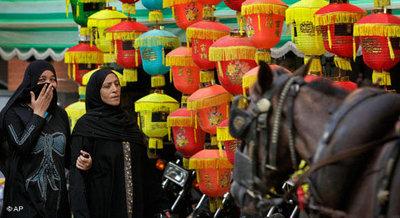 Cross-religious inspiration: According to the earliest hadith this tradition refers to the Jewish practice of fasting on Yom Kippur

​​ More than 73 per cent of Turkish Muslims in Germany fast according to a survey carried out by the Center for Turkish Studies in Essen in 2005. Fasting is thus the most commonly observed religious obligation for Muslims.

Those who choose not to observe it, however, are made aware of a certain disapproval directed towards them from within the Muslim community. "Some Muslims give anyone who chooses not to fast in Ramadan a hard time. They tend to point the finger disapprovingly and don't respect your decision. But it is, after all, a decision between myself and God," says Azima Moustafa. Her decision has even brought her verbal abuse, the 31 year old says.

Yet Islam does allow for exceptions. Fasting only becomes a religious duty after puberty. The sick and the elderly as well as travellers are exempt from fasting and can make up for lost fasting days at a later time. It is health and the cleansing of body, mind and soul, after all, that is the ultimate objective of the fast.

Jailhouse Fast
Ramadan in Heilbronn Prison
Ramadan, a very special time in the religious calendar for many Muslims, began in early October. Steffen Felger reports on what Muslim prisoners in Heilbronn, Germany, do during Ramadan

Ramadan in Germany
A Time for Spiritual Reflection and Self-Restraint
During Ramadan many worshippers attend special services in Mosques where the Qur'an is read and they also celebrate the so called "Iftar" – when they break their fast at sunset. Arian Fariborz witnessed one Iftar ceremony in the German city of Cologne

END_OF_DOCUMENT_TOKEN_TO_BE_REPLACED
Social media
and networks
Subscribe to our
newsletter