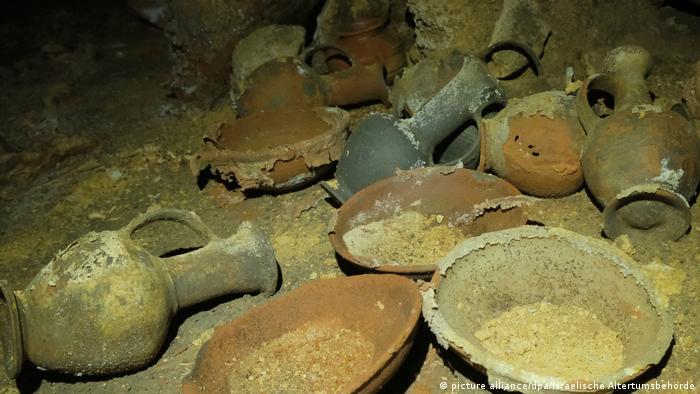 Ramses II-era burial site in Israel: the 3,300-year-old chamber was described by one archaeologist as like being "on the set of an Indiana Jones movie". The structure, complete with dozens of intact pottery and bronze artefacts, was found by accident. The burial chamber containing several dozen pieces of intact pottery and bronze artefacts appears to have served as a family tomb 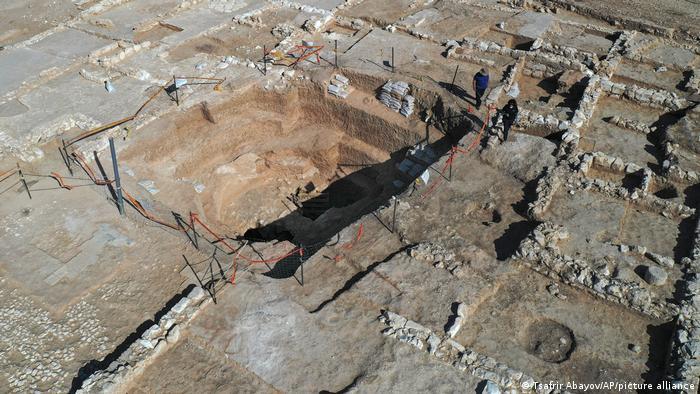 Estate in southern Israel: after two mosques dating back some 1,200 years were found near the Bedouin town of Rahat, remains of a luxurious four-winged estate from the same period were also unearthed nearby. One of the rooms is covered with marble floors, the walls decorated with frescoes. Archaeologists also found a cistern and shards of decorated glassware, indicating the owners' wealth 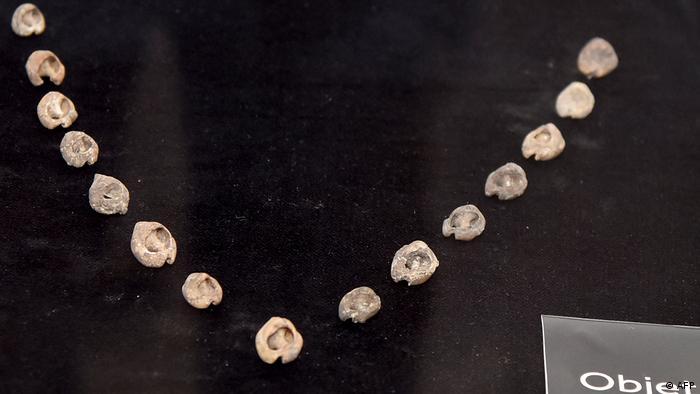 More than just jewellery: these perforated shells, dating back 150,000 years, are believed to be the world's oldest jewellery. Assumed to have been used to form necklaces and bracelets, they were discovered in the Bizmoune cave near the coastal resort of Essaouira, in Morocco. Researcher Abdeljalil Bouzouggar described them as "symbolic objects that can only be transmitted through language". 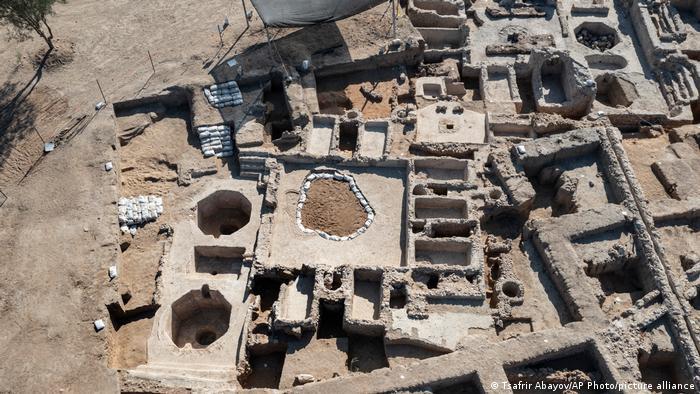 When wine was preferred over water: a sprawling winemaking complex dating back some 1,500 years was recently unearthed in Yavne, Israel, complete with wine presses, kilns for producing clay wine jars and warehouses. Excavation director Jon Seligman explained that wine was a common substitute for drinking water, which was not always safe back then, and was served to both adults and children 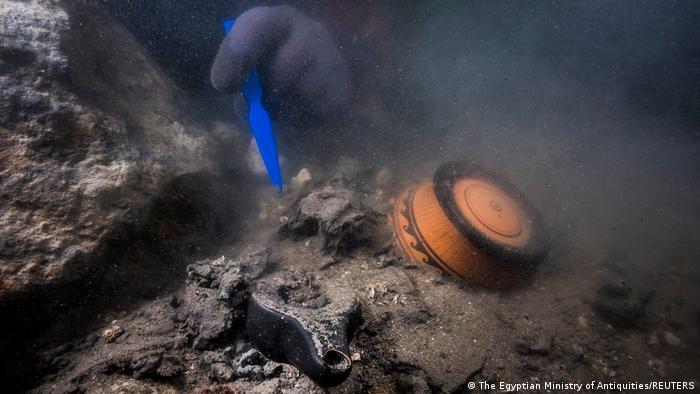 Hellenistic-era warship in sunken city: a Greek warship found in the sunken city of Heraklion in Egypt's Abu Qir Bay is the latest discovery of very rare Hellenistic-era ships. Heraklion – also known as Thonis – was hit by earthquakes, tsunamis, rising sea levels and soil liquefaction at the end of the second century B.C. The ship was docking near the temple of Amun when the entire city collapsed, burying it under the debris 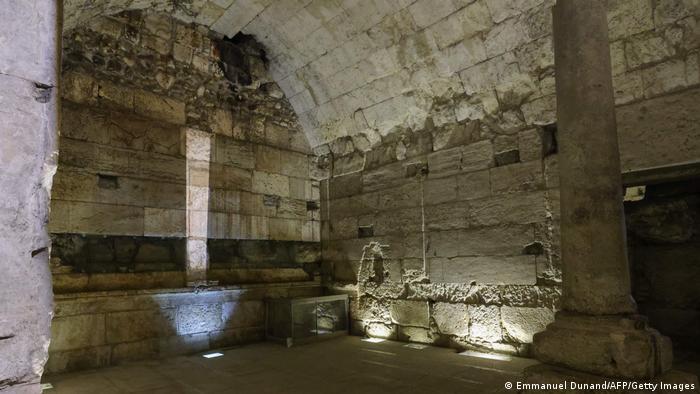 Opulent city hall: in early July, Israeli archaeologists found what may have been a 2,000-year-old city council building during excavations under Jerusalem’s Old City. The opulent space is believed to have been a banquet hall for the elite. It is located close to the site of the Second Temple, which was destroyed by the Romans during the Siege of Jerusalem in 70 A.D. 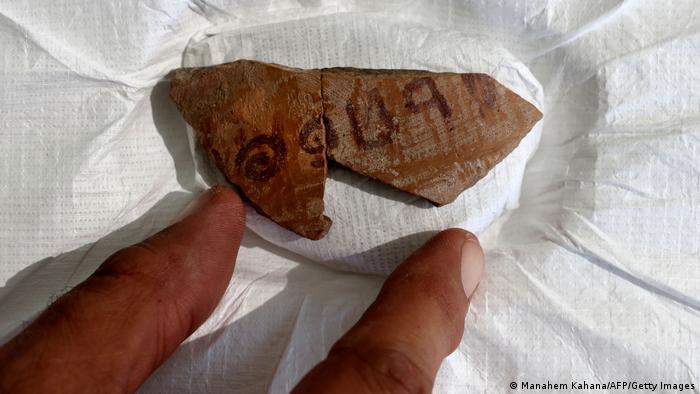 Missing link in alphabet history: a 3,100-year-old pottery fragment inscribed with the name "Jerubbaal", relating to the biblical book of Judges, was found in southern Israel in July. Written in early Canaanite script, it provides a rare and valuable clue to the development and spread of writing systems in the region, as it is unusual for local researchers to find any writing from the 12th and 11th centuries B.C. 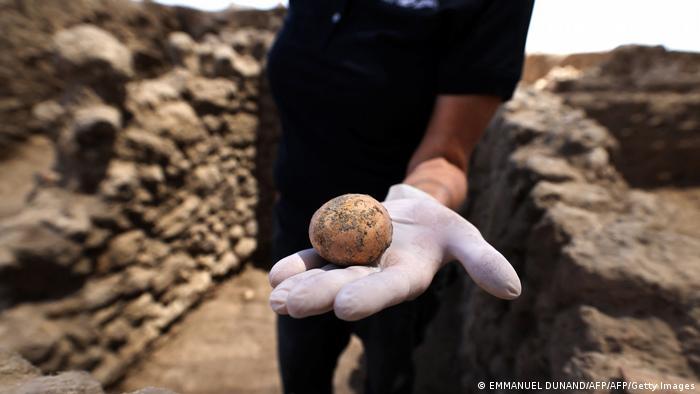 A quirky find: during excavations in the Israeli town of Yavne in June, archaeologists discovered an intact 1,000-year-old chicken egg. "The egg's unique preservation is evidently due to the conditions in which it lay for centuries, nestled in a cesspit containing soft human waste that preserved it," they said. Sadly, it cracked later in the lab 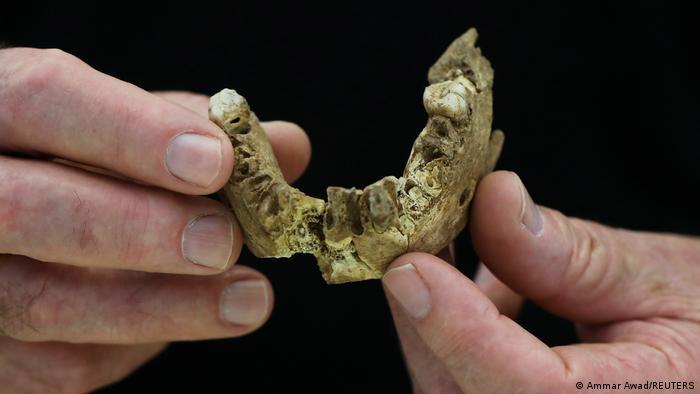 A new type of hominid: in June, researchers found the remains of the "Nesher Ramla Homo type". They took the name from the area in Israel where they had been doing excavation work in a sinkhole. The hominids lived alongside our species more than 100,000 years ago. The finds included this jaw that belonged to a person who lived 120,000 to 140,000 years ago 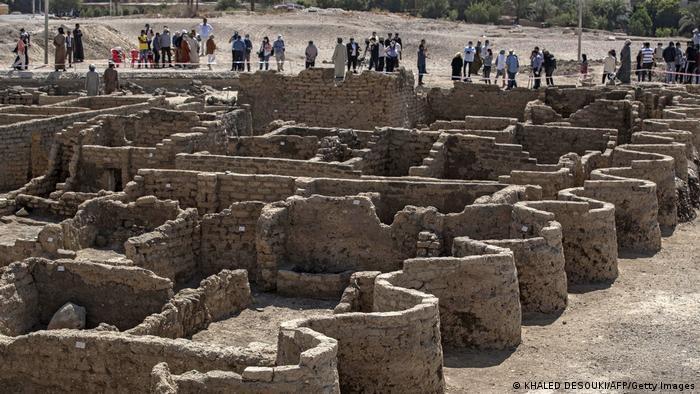 Lost golden city of Luxor: Egyptologists announced the discovery of a 3,000-year-old "lost golden city" near Luxor in April, touting it as one of the most important finds since the tomb of Tutankhamun. It dates back to the reign of Amenhotep III, one of Egypt's most powerful pharaohs, who ruled from 1391 to 1353 B.C. 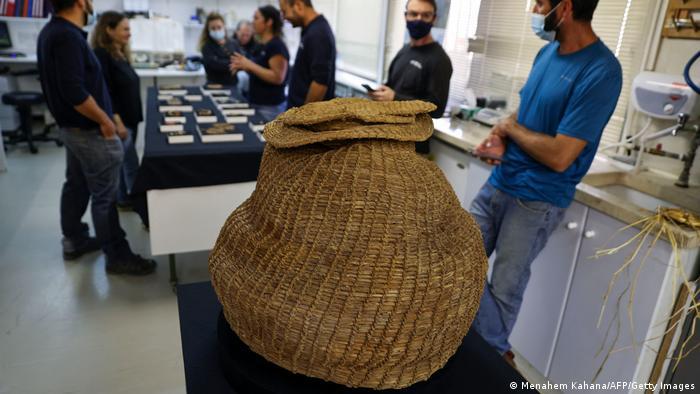 World's oldest woven basket: in March, archaeologists found a well-preserved basket with a capacity of about 100 litres dating back to the pre-pottery Neolithic period, roughly 10,500 years ago. Found in the Muraba'at Caves in the Judean Desert west of the Dead Sea, it was buried under roughly 1 metre of soil. It was exquisitely preserved due to the region's high temperatures and extreme aridity

END_OF_DOCUMENT_TOKEN_TO_BE_REPLACED
Social media
and networks
Subscribe to our
newsletter