Rap Music from the Sudan
Emmnuel Jal's Vision of Peace

Emmnuel Jal was forced to go to war as a child soldier in the Sudan People's Liberation Army. Now he is an up-and-coming star of the Sudanese and West African music scene with a political message for a worn-torn country. Max Annas reports

"Abdel Gadir Salim and I wanted to show that it is possible for a Sudanese Christian and a Muslim musician to work together," Jal explains

​​It was just a few months ago that the "Rough Guide to the Music of Sudan" appeared, the characteristically meticulous effort of the London World Music Network label to present the music of an entire country on one CD. In the case of Sudan it is a doubly difficult matter: there is not only the contrast between traditional vs. modern, but also North against South and Islam against Christianity – following the old fronts of the civil war.

The CD leaves you with the burning desire to hear more from one artist – and soon! "Gua" by Emmanuel Jal is the promise of an album to come.

First your attention is gripped by a chorus of extremely high women's voices, then comes the smooth chant of a male voice before Jal takes over with his narrative-leaning rhymes. It is orchestrated very sparingly, with a bit of rhythm, a few synthetic bleeps, until finally the women's voices release you from the track with one desire: more of the same!

The desire of being independent

"'Gua' is a track about peace, the cry for peace", explains Emmanuel Jal, now in his mid-20s. It's about how people want to go home, they don't want to depend on the help of others anymore."

Jal comes from the south of Sudan, Africa's largest country, ravaged for over 20 years by a civil war. It was a war of secession between the south, with its Christian majority, and the Muslim-dominated north with the central government in the capital of Karthoum. Jal was forced to go to war as a child soldier in the Sudan People's Liberation Army (SPLA).

Ceasefire – a symbol for a possible future of Sudan 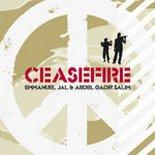 ​​"Gua" is now followed by an entire album, "Ceasefire" – but it is anything but the logical continuation of the first hit track. "Ceasefire" is a collaboration between Emmanuel Jal and the doyen of North Sudanese dance and café music, Abdel Gadir Salim, a star who has toured internationally.

The album is more than a normal CD: it is a political statement. "We want to show that it is possible for a Christian and a Muslim musician to work together. 'Ceasefire' is the symbol of a vision – for the future of Sudan."

Jal clearly dominates the album. More tracks are his than Salim's, and his presence in Salim's songs is stronger than Salim's in his. The rapper uses the surface of Salim's arabophile music as a basis for his delivery, adapted to the beats.

By contrast, on Jal's tracks Salim usually adds little more than a few upbeat sounds from his combo, usually with the saxophone or the oud. For all the politics behind "Ceasefire", surprisingly enough, the result is quite a respectable CD.

The power of music

Any conversation with Emmanuel Jal quickly turns to politics. "Music speaks to the soul. It has a lot of power. It makes people fight, it makes people love each other, and it is the cause of communication among people."

"Music can do things that other media can't do. If something can't be printed in the papers or said on the radio, music can bring it across", Jal goes on to say. "Music can bring people together."

To discount the last statement as a platitude is to ignore what it can mean in a ravaged country like the Sudan. Jal counts on the unity of the state to overcome ethnic and religious divisions – as in the example set by "Ceasefire". "This is a challenge for the government – now it has to show that it is willing to do something for the people."

Emmanuel Jal has already come out with a different album in Kenya. It is called "Gua", like the single, and created quite a stir on the booming local rap market. "All I really wanted to do was see whether the people like my music... I had no idea that I'd be such a big success."

The combination must be right, though. In itself, a background as a child soldier is not enough to make a pop star, whether in Africa or in Europe. But when this is joined by a song like "Gua" and a sensational musical-political project like "Ceasefire", things start to gain momentum. But whether the Sudan will follow the example of Jal and Abdel Gadir Salim remains an open question.

END_OF_DOCUMENT_TOKEN_TO_BE_REPLACED
Social media
and networks
Subscribe to our
newsletter