Hip-hop is on the rise in Indonesia. Today groups are finding a large audience among urban youth – like the band Homicide. Ben Harkness spoke to the band's front man about their music and the state of hip-hop in Indonesia 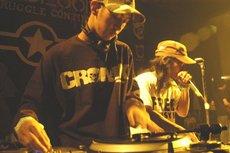 The Bandung Hip-hop band Homicide formed in early 1995. Relative veterans of the hip-hop scene, Homicide pride themselves on being overtly political

​​Homicide has been part of the hip-hop scene for over ten years. Have there been many changes over that period?

Ucok: A lot has changed since the early nineties. There are a lot of really good groups in Indonesia now that are very different to the earlier hip-hop groups and really different to Homicide too. These days there are a lot of styles and approaches. When the original line-up behind Homicide first got together, hip-hop was still in its infancy. A few years prior, hip-hop had made some inroads in Indonesia. But there wasn't really a hiphop scene so to speak. This meant that looking for people with similar interests in making this sort of music was really tough. Finding someone to help record and produce the music was even tougher.

These days it seems the music scene in Indonesia is a little more conducive to allowing new groups to go their own way. The infrastructure of the independent music industry is far more developed than it was a few years ago. The problem now is that radio stations aren't ready and the media are still scared. That is one of the main differences between Indonesia and say America or Europe, where more outspoken or controversial bands can be appreciated for what they are.

Your lyrics are often critical of society. What issues does Homicide consider important?

Ucok: When we were starting out, we took a lot of inspiration from bands like the New York groups 'The Last Poets' and 'Public Enemy'. The 'Last Poets' were a group of African-American Muslims. These guys met in gaol after refusing to go to Vietnam. They used to perform their poetry, a lot of it politically charged, on the street corners of Harlem. 'Public Enemy', on the other hand, brought a social and political conscience to hip-hop in the eighties. Their approach was about more than just the music. They were intent on enjoying themselves but having something to say at the same time.

Our style is quite similar to theirs. Our music expresses our views of the world. The issues we deal with are quite varied but essentially we encourage young Indonesians to look beyond the lifestyles that the government and the corporations feed them. We want to encourage discussion about individual and collective ways to establish economic, cultural and political autonomy.

Have the issues that Homicide sees as important changed since the band first formed?

Ucok: We see a lot of issues differently now. When Homicide began, most local bands were atrocious. The Indonesian music scene was really uninspiring for young, up and coming artists. We were very vocal in criticizing the state of Indonesian hip-hop in particular. It was a common theme in our earlier songs. We saw many groups using hip-hop as a means to fame or fortune, and not for raising awareness among young people. This doesn't bother us so much anymore.

We're more focused about what we as a group are doing, rather than the industry as a whole. It is often hard for young Indonesians to find easily accessible creative outlets. If hip-hop can provide opportunities for creative expression then that is a positive thing. Some Indonesian hip-hop acts rap about their frustrations, their relationships. Others are just rapping about nothing. Not many Indonesian hip-hop groups are concerned with social or political issues. Very few are pushing the envelope, or could be considered controversial. Most are just playing it safe, staying within a comfort zone. But we're fine with that now.

Hip-hop, much like punk, has its roots in social commentary and protest. Does it surprise you that hip-hop in Indonesia is only now gaining its feet while punk as a movement reached its peak a few years ago?

Ucok: No. Hip-hop is different to punk. Its impact has also been very different. Punk has, over a number of years, built a strong foundation in the music industry. Today there is strong infrastructure behind punk and punk makes a significant contribution to the music community. Compare this to hip-hop. There have been several waves of hip-hop in Indonesia over the years, but there is nothing to show for this, with the exception perhaps of passé trends.

But with the current resurgence of hip-hop in Indonesia I hope things can change. I strongly believe hip-hop should establish its own record label and its own networks, much like those established by the punk movement a few years ago. The lack of such support has been a big factor in hip-hop being only a transient force. The larger record labels signing new hip-hop acts still turn many of these acts into half-baked entertainment for the sake of profit. A hip-hop label would allow a greater appreciation of hip-hop as a genre, and greater appreciation of the talents of young hip-hop groups.

Since the fall of Suharto, much has changed in Indonesia. Have these changes affected the potency of hip-hop?

Ucok: No. Government change hasn't affected hip-hop's capacity to be a mouthpiece for social and political issues. That's true for Homicide anyway. We have never let ourselves be intimidated by the government. If you want to voice an opinion, then voice it! At most you are followed by intelligence agents, or taken into custody after coming off stage and threatened with this and that. And that for me is no problem.

Punks for Politics
Underground Music Gives Young Indonesians a Voice
Today punk is probably the most conspicuous youth movement in Indonesia and it presents a striking contrast to the often distorted Western media image of an insular country full of Islamic fanatics. Christina Schott reports

Hip-Hop in Nigeria
"We Want Solution, Mr. President!"
Though the rest of the world has yet to hear about it, hip-hop is currently booming in the Nigerian capital, Lagos – and the rappers are angry about the state of things under President Obasanjo. Annett Busch reports

END_OF_DOCUMENT_TOKEN_TO_BE_REPLACED
Social media
and networks
Subscribe to our
newsletter