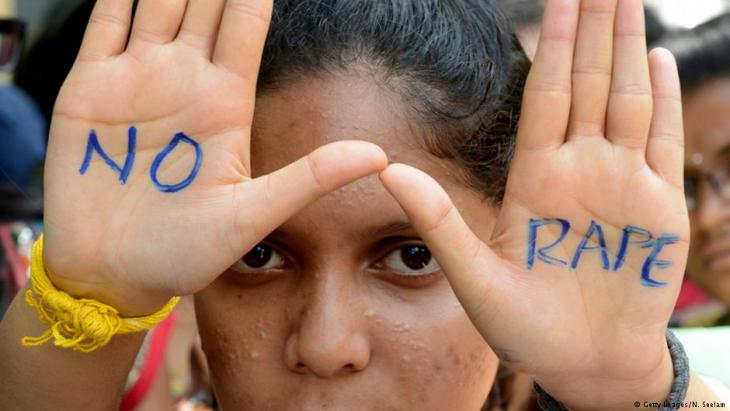 The most recent rape and murder of a girl in Pakistan caused a huge public outcry. Though similar cases in neighbouring India have tended to attract fewer headlines, sexual violence in both countries is an ongoing problem, says Esther Felden

Despite the gang's warnings against going to the police, the husband reported the crime to the authorities and a short time later all four of the men were arrested. The northern Indian state of Haryana where the incident took place has gained an unenviable reputation after a spate of recent assaults.

Reports of these violent attacks have regularly hit the headlines since the beginning of the year. In January 2018, the Times of India detailed a horrifying chronicle of six rape cases that took place over a period of as many days – a staggering statistic even by Haryana's standards.

Especially abhorrent was the revelation that one of the victims of these violations had been a three-year-old, raped by a fifteen-year-old boy. An eleven-year-old Dalit girl had been sexually abused and murdered by two neighbours from her own village, the men allegedly continued to sexually abuse the body for hours after the girl's death. A 50-year-old man was arrested for mutilating the private parts of a ten-year-old girl by inserting a piece of wood into her vagina. Two young women were gang raped and the brutally mutilated body of a 15-year-old girl discovered in a canal. She too had suffered massive internal injuries.

These cases are by no means isolated examples. Rape is still an everyday occurrence in India, complains Ranjana Kumari, women's rights activist and director of the "Centre for Social Research" in New Delhi. The situation has got even worse recently, she says. "We are demanding the resignation of the head of the local government in Haryana. Some of the recent cases here have been worse than the gang rape of 2012." 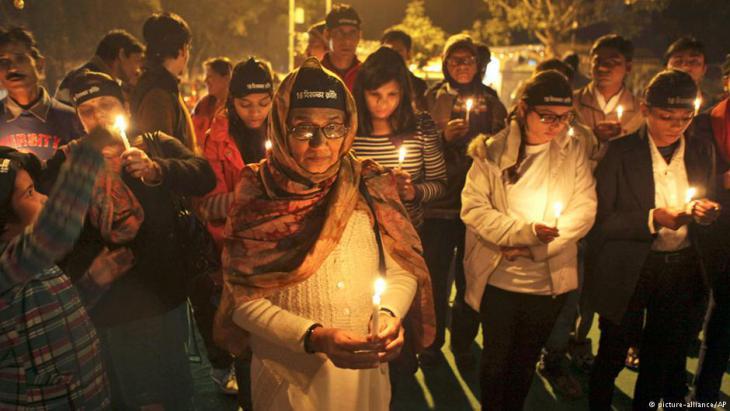 Vigil to mark the first anniversary of the death of gang rape victim Jyoti Singh Pandey. As a consequence of that crime, the laws governing sexual offences were tightened up, though the number of rapes has not decreased

It was in December of 2012 that the brutal rape of Jyoti Singh Pandey by a group of six men on a bus in New Delhi made worldwide headlines. When the female medical student died of her injuries two weeks later, it prompted a massive outcry and masses of angry protesters took to the streets.

As a consequence of that crime, the laws governing sexual offences were tightened up, though the number of rapes has not decreased. Quite the opposite in fact. According to figures released by the "National Crime Records Bureau", there were nearly 35,000 cases of rape reported to the police in 2015, a rise of almost 40 percent over 2012 when the 23-year-old student died. "There are better laws today, but the number of rape cases is still rising," says Kumari.

"An endemic rape culture exists in northern India", says the activist. In the state of Haryana, which borders on the capital Delhi, there were something like 115 gang rapes in 2017 alone. Responsibility for this is something Indian society cannot wash its hands of, she believes.

Sexual violence against women is deeply rooted in Indian society and part of a widespread culture of discrimination and oppression, a culture of which the police and judicial system are a constituent part.

Kumari is also damning in her assessment of the security services: "One police officer described rape as part of society. As something that has always existed. When police and politicians talk like this, it shows that they don't take the whole thing seriously." Kumari has demanded that the officer in question be relieved of his post – a wish, she knows, that has no chance of being granted.

In neighbouring Pakistan another harrowing case made headlines at the beginning of January. The body of a little girl, who had been abducted on her way to Koran school, was found two days later on a rubbish tip. The child had been repeatedly raped before being strangled. The parents criticised the police for their lack of activity following their daughter's disappearance.

The brutal murder of Zainab unleashed a wave of outrage and horror across the country and dominated social media for days afterwards. Violent protests against the Pakistan government erupted in the city of Kasur, close to the Indian border and resulted in the deaths of two of the protesters.

Grief and anger following the murder of Zainab: on 4 January 2018, the seven-year-old was abducted on her way to Koran school. Zainab's parents criticised the police for their lack of activity following her disappearance. Her father, Amin Ansari, said that he expected the authorities to catch and punish the perpetrator(s), hoping that other girls would be spared his daughter′s fate

The sense of outrage has been overwhelming – the demands for change loud. But just as in India, the causes of the problem are deeply rooted in the society, says Beena Sarwar. In her work, the journalist and filmmaker focuses primarily on gender and human rights issues. She is also the founder of "Aman ki Asha" ("Hope for Peace"), an initiative which is working to improve relations between India and Pakistan.

"There is too much shame in our society. Children are often not believed when they try to tell someone what an adult has done to them. Or they may even be made to feel that they themselves are guilty of wrongdoing."

What makes things even worse, she says, is that most of the offenders actually come from within the family itself, or from the child's immediate environment. Sarwar is well aware that Pakistani society cannot eliminate the problem completely, no society can. "But we have to have more effective preventative measures to reduce the number of such offences."

She sees no direct link between sexual violence against women and Islam. "It has nothing to do with that. There is abuse of children in all societies."

Saman Jaffery has a very similar view. She is a member of parliament and committed to securing more rights for women and minorities in Pakistan. She finds the lack of debate on rape in Pakistani society regrettable. "The tendency to deliberately look the other way is particularly common when it comes to sexual offences – even more so in cases where the offender is either a relative or a friend of the family." 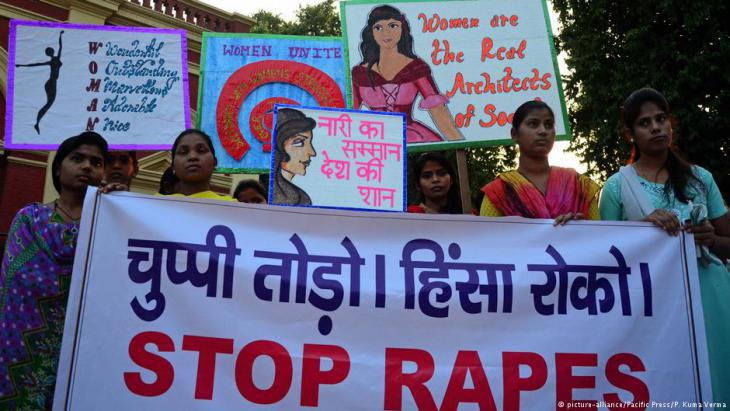 Public outcry: violence against women is widespread in India. In 2012 the world reacted with horror and disgust to the murder of student Jyoti Singh Pandey in New Delhi. Her death triggered week-long protests in India. The government reacted to the case by tightening the rape laws. Nevertheless in 2014 alone 36,735 cases of rape were reported to the police. The real figure is likely to be much higher

Another important factor in her opinion is that the subject is simply treated as taboo. "Certain things are just not talked about." Addressing the issue is for her the responsibility of both the Pakistan government and the people. "It is the government first and foremost that needs to be held accountable. But society as a whole is failing the victims by not giving them the support they need and not encouraging them to go public and talk about what has happened to them."

No one in Pakistan feels responsible for this situation, she says. "Added to this you have the poor standard of education and the fact that victims often feel ashamed or adhere to a false sense of honour."

Ranjana Kumari strongly believes that in India too, fundamental change is badly needed. "A widespread recognition of the equality of men and women – that they each have the same rights as citizens, is crucial." This is the message that has to be got across, both within families and in schools. Only then will a gradual change in society begin. "Until that happens, men will go on trying to exert power over women."

At least pressure is now growing on the police and some changes are happening. There are plans for the construction of dozens of help centres for the victims. The initiative "Justice for her" has come about through collaboration with a British university.

The authorities in Madhya Pradesh, the state where most of the rape cases have occurred, are planning to open more than 50 such centres for women. The capital New Delhi and the state of Punjab are also involved in the project, as is Haryana. For those women raped and murdered in recent days, however, it has all come too late.

In India, bricks are traditionally made by hand. The job is dirty, exhausting, poorly paid, and mainly done by women. ... END_OF_DOCUMENT_TOKEN_TO_BE_REPLACED

Modi’s Citizenship Amendment Act grants the Indian citizenship to members of persecuted minorities from neighbouring countries, yet excludes Muslims. This has sparked waves of ... END_OF_DOCUMENT_TOKEN_TO_BE_REPLACED

Having re-invented himself politically following the Gujarat porgroms of 2002, Narendra Modi has – to the delight of big business – consistently pursued a tough line in market- ... END_OF_DOCUMENT_TOKEN_TO_BE_REPLACED

Dozens of people have been killed as a result of protests against India's controversial Citizenship Amendment Act. Critics say the law is aimed at marginalising Muslims and goes ... END_OF_DOCUMENT_TOKEN_TO_BE_REPLACED

India's rapid descent into xenophobia, violence and irrationality has an important economic dimension, but it takes politicians to channel these emotions into nationalism and to ... END_OF_DOCUMENT_TOKEN_TO_BE_REPLACED

Since the leadership in New Delhi revoked the special autonomy status, previously laid down in the Indian constitution, for the state of Jammu and Kashmir at the beginning of ... END_OF_DOCUMENT_TOKEN_TO_BE_REPLACED
Author:
Esther Felden
Date:
Mail:
Send via mail