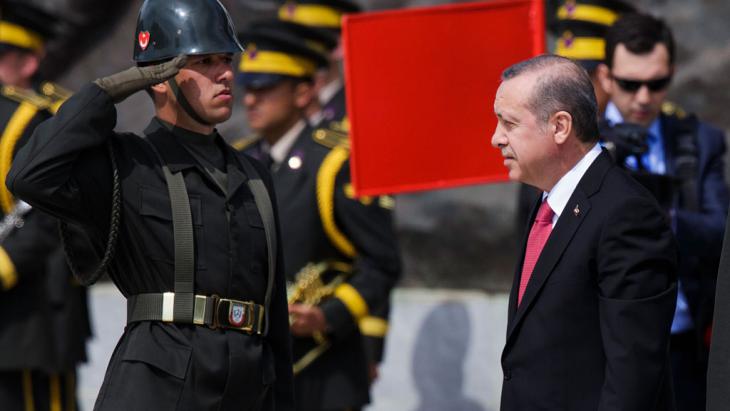 One of the main achievements of Turkish President Recep Tayyip Erdogan and his ruling Justice and Development Party (AKP) has been to stop the Turkish Army meddling in politics. In the past few months, however, the president seems to have begun allying himself with the army in what could be a major realignment in Turkish politics. Dorian Jones in Istanbul considers whether this is a tactical or a strategic change in policy

A no-expenses-spared TV advertisement commemorating the centenary of the Battle of Gallipoli during World War I presented a powerful image of the Turkish president and his military at one. The film shows pious soldiers praying and fighting against the Western invader, and President Erdogan, praying in the rain in a military cemetery. The high-end advertisement was broadcast over and over again across all TV networks and was paid for by the president's new and classified presidential fund.

The Gallipoli commemorations are seen as an indication of a tectonic shift in politics in Turkey. "Every mobile phone has an option, return to factory setting, and factory setting is nationalism in Turkey," observes sociology professor Ayhan Aktar of Istanbul's Bilgi University. "In the old days, we had Kemalist nationalism, and now Tayyip Erdogan is repeating the same narrative with Islamic sources."

President Erdogan's political career was defined by his titanic struggle for supremacy against the once omnipotent generals. The Turkish Army, which acts as the guardian of the secular state, has viewed Erdogan's Islamist roots with deep suspicion, if not outright hostility. 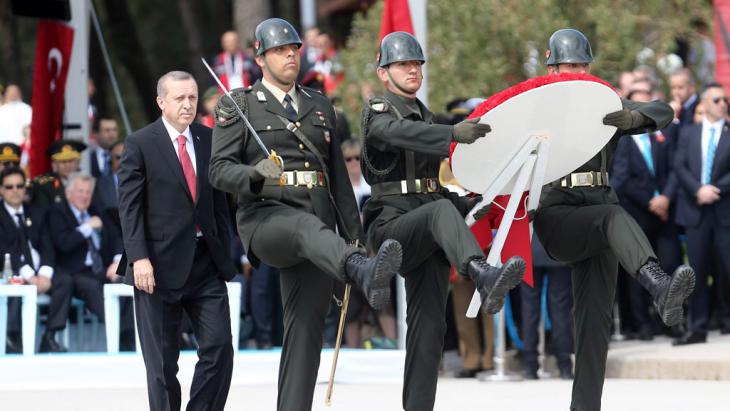 President Erdogan arrives to lay a wreath at the Canakkale Martyrs' Memorial in Canakkale during the commemoration ceremony marking the 100th anniversary of the Canakkale Land Battles. Turkey hosted leaders from World War I's former Allied powers to honour the tens of thousands killed at the Battle of Gallipoli 100 years ago in one of the most futile yet emblematic campaigns of the conflict

From foe to friend

In February 1997, in what was dubbed the "post-modernist coup", the generals forced Erdogan's political mentor, Prime Minister Necmettin Erbakan, out of office. In the subsequent crackdown, Erdogan himself was ousted from the post of mayor of Istanbul in 1999 and jailed, on a sedition charge, for reciting a poem at a political rally. Erdogan's subsequent meteoric rise to power from jail to prime minister to president saw him finally drive the army not only out of politics, but also – in the case of hundreds of generals and senior officers – into jail on coup-plotting charges.

In March of this year, Erdogan performed a dramatic mea culpa, addressing cadets and their military commanders at the War Colleges Command. "Starting with myself, the whole country was misled, tricked; we've been tricked," declared Erdogan, referring to coup-plotting trials. Within a month of the apology, courts overturned the last coup-plotting convictions, freeing all those jailed. Ironically, the only person still in jail in this context is the journalist Mehmet Baransu, who originally broke the story of the plot to overthrow Erdogan's government.

An act of political desperation is how some characterise the move. "He has burnt all his other bridges, so he has got to find some allies. Whether or not the military bought what he said, I do not know," says International Relations Professor Cengiz Aktar of Istanbul Suleyman Sah University, "He has deserted everybody else, and everybody else has deserted him." 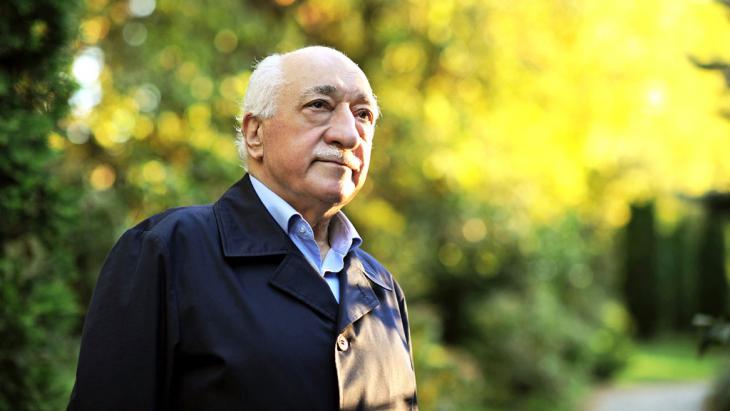 Fethullah Gulen (pictured here) used to be a close ally of President Erdogan. Now, however, the two are locked in a bitter feud. Gulen, who is in self-imposed exile in the US, wrote in a "New York Times" article in February 2015 that Turkey's leaders are taking the country on a path towards totalitarianism. He denies plotting to build "parallel state" in Turkey. The Turkish government has revoked his passport and recently repeated its call to Washington to extradite the Islamic preacher

From friend to foe

Fethullah Gulen is an Islamic cleric living in self-imposed exile in the United States. His network of followers, many of whom work for the state, is believed to be the most powerful religious organisation in Turkey. Erdogan and Gulen are invariably described as the most powerful people in the country. The men were once close allies, but fell out spectacularly and have become arch enemies. Turkey is now trying to extradite Gulen on charges of seeking to overthrow the state.

The December 2013 police investigation into allegations of massive corruption by family members linked to Erdogan and other key ministers was described by the president as a coup attempt by Gulen followers. The probes were eventually shut down with the firing or removal of thousands of police officers, judges and prosecutors.

A cleansing operation to remove suspected Gulen followers within the Turkish judiciary and police has continued to accelerate. That process saw Erdogan's alliance with conservative nationalist forces within the state deepen. In this year's elections to the judiciary ruling authority, an alliance of staunchly pro-secular Turkish nationalists joined with AKP supporters to defeat a pro-Gulen list of candidates. 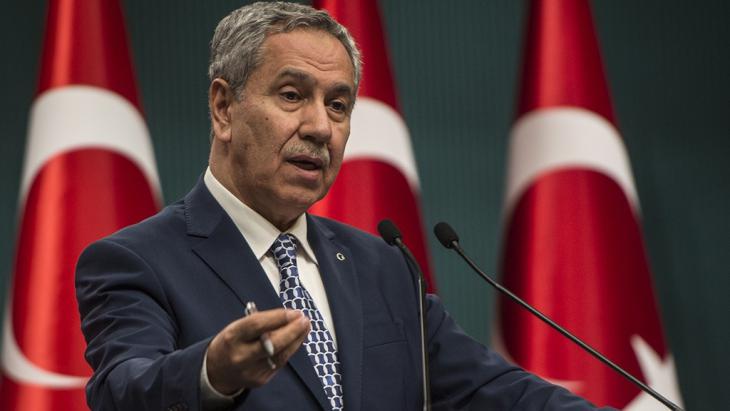 Turkey's Deputy Prime Minister Bulent Arinc. According to Dorian Jones, the president appears to have markedly cooled towards the peace process with the PKK in recent months, voicing increasingly strong criticism of Kurdish political leaders and steps taken by his government. "That drew an unprecedented rebuke from political heavy weight Deputy Prime Minister Bulent Arinc, who told him to step back," writes Jones

A key question being asked in Turkey is whether Erdogan's reaching out to elements of the Turkish state and wider nationalist base is temporary or permanent. "The alignment during the judicial elections was out of a tactical obligation in order to form a camp strong enough to weed out the Gulenist's influence. I don't read a structural change in Erdogan's politics," argues Sinan Ulgen, visiting scholar of the Carnegie Institute in Brussels.

But the new alignment could be more about the president returning to his ideological roots. "Nobody delved into the right-wing politics background of Erdogan and his AKP when they came to power; it was all about Islamism," notes political scientist Professor Nuray Mert of Istanbul University, "Erdogan is coming from this tradition of the politics of right wingism."

A key test of the nature of the president's new political alignment are the ongoing peace efforts to end a decades-long conflict with the Kurdish rebel group, the PKK. The process was initiated by Erdogan and is widely seen as offering the best chance to peace: a ceasefire is still in place after a year. "Erdogan is much closer to the army thought of secular authoritarianism and state authoritarianism," worries journalist Danzikyan. "I can see that the atmosphere is changing, and this always affects the minorities and Kurds."

The president appears to have markedly cooled towards the peace process in the past couple of months, voicing increasingly strong criticism of the Kurdish political leadership and even steps taken by his own government. That drew an unprecedented rebuke from political heavy weight Deputy Prime Minister Bulent Arinc, who told Erdogan to step back.

Some claim the new alliance is just about the forthcoming general election in June. "I don't see any threat to the peace process," says analyst Ulgen, "It's just about election politics and the president seeking to garner nationalist votes." So, is this a new synthesis between former rivals or just a tactical alliance in the notoriously shifting sands of Turkish politics? Either way, many fear for freedoms and rights: "This discourse promises us only more authoritarianism. We are already in a deep crisis of authoritarianism," warns political scientist Mert.

Ayse Gerner is a Muslim woman and a marriage counsellor. It is a combination appreciated by her clients, most of whom are Muslim. Although Muslim couples face the same ... END_OF_DOCUMENT_TOKEN_TO_BE_REPLACED

Born amid the horrors of war in Iraqi Kurdistan, Danish author Sara Omar now uses her voice to denounce violence inflicted on women in the name of reactionary Islam, a "calling" ... END_OF_DOCUMENT_TOKEN_TO_BE_REPLACED

The New Patrons seek to sponsor art projects initiated by citizens in order to better dovetail art and life. Anyone can become their client. In Berlin, the impressive comic " ... END_OF_DOCUMENT_TOKEN_TO_BE_REPLACED

For years, singer Aynur Dogan has preserved and expanded the possibilities of traditional Kurdish music, lending a voice to her people. She has just released her seventh studio ... END_OF_DOCUMENT_TOKEN_TO_BE_REPLACED

Ronya Othmann's novel "Die Sommer" (The Summers) tells the story of Leyla – the daughter of a German and a Yazidi Kurd – who visits her grandparents' Yazidi village in northern ... END_OF_DOCUMENT_TOKEN_TO_BE_REPLACED

The outpouring of solidarity worldwide following the violent death of George Floyd should prompt us to step back and fundamentally question racist structures and privileges based ... END_OF_DOCUMENT_TOKEN_TO_BE_REPLACED

Comments for this article: Short-term tactic or long-term strategy?

Isn't there a much easier explanation why Erdogan has reviewed his relationship with the Turkish army? Turkey is in an extremely critical strategic situation: south of the border to Syria and Iraq the IS is posing a strategic threat to Turkey's security and existence as a modern state, to the east Iran is a big rival of Turkey as a local hegemonial power. And to the west and north old foes of Turkey, namely Greece and Russia, have redefined themselves. Putin is trying to recreate old Russian glory and Greece's government is not only containing populist leftists but also right wing populist nationalists which might not be helpful to solve the old disputes over borders in the Aegean Sea and over Cyprus.

So Erdogan has every reason to be on good terms with his National Army, totally regardless which ideology he follows.

END_OF_DOCUMENT_TOKEN_TO_BE_REPLACED
Social media
and networks
Subscribe to our
newsletter