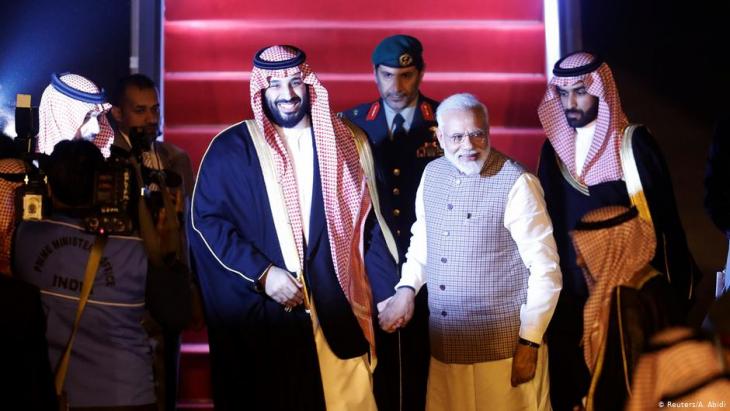 Abu Dhabi and Riyadh see a natural partnership with Modi’s government, a co-operation that could change the dynamics of the South Asian-Gulf nexus. By Jean-Loup Samaan

If China’s engagement with Gulf countries has gathered much attention from Middle Eastern policy circles over the last five years, another parallel development has occurred in its shadow. Under the premiership of Narendra Modi, the Indian government is developing strategic ties with the Peninsula, particularly with Saudi Arabia and the United Arab Emirates.

These ties go beyond the obvious economic motivations – such as India’s energy demands and the massive Indian diaspora in the region – to include security co-operation. As Modi enters his second term, there are reasons to believe this India-Gulf rapprochement, far from being temporary, may re-define the nexus between the Peninsula and South Asia for the near future.

The logic behind reinforcing Indian-Gulf relations seems initially evident. Although an old phenomenon, the presence of Indian workers in the Arabian Peninsula accelerated with the oil boom of the seventies. Today, about 8.5 millions of Indians reside in Gulf Cooperation Council (GCC) countries, and 55 percent of remittances into India comes from the Gulf.

A common saying among the Indian diaspora in the Gulf is that Dubai is the fifth largest Indian city. Additionally, the secure flow of commodities through the waters of the Gulf is a genuine national interest for India: the latter imports about a third of its crude oil supply from the GCC.

An important security impetus is also driving this rapprochement. India has long perceived the Gulf as a "safe haven" for Indian organised crime. India’s most-wanted gangster, Dawood Ibrahim, had extended business ties in the Peninsula, and Pakistani terrorist groups that used it as a backyard for their operations.
Saudi King Abdullah’s visit to Delhi in 2006 spurred a first rapprochement. This visit paved the way to the signature of "The Delhi Declaration," which intended to provide a strategic framework to the Indian-Saudi relationship. But despite the public announcements, the partnership remained dormant. The election of Narendra Modi in 2014, however, gave Indian-Gulf relations a new direction.
At the outset, Modi’s political background seemed at odds with the Arabian Peninsula: a fierce proponent of Hindu nationalism, Modi had an international reputation tarnished by his controversial mandate of Gujarat state’s chief minister during the communal riots of 2002 that led to the killing of hundreds of Muslims.

Chinese President Xi Jinping's visit to Saudi Arabia in December 2022 may have rattled Washington, but it simply highlighted the Arabs’ desire to diversify their foreign relations ... END_OF_DOCUMENT_TOKEN_TO_BE_REPLACED

Iran has withdrawn its participation in the Frankfurt Book Fair, accusing the event of meddling in the country's domestic affairs. Organisers have denied the accusation. By ... END_OF_DOCUMENT_TOKEN_TO_BE_REPLACED

Analyst Iyad El-Baghdadi examines the ongoing tensions between the United States and the two Gulf states – Saudi Arabia and the UAE – and their geopolitical implications in ... END_OF_DOCUMENT_TOKEN_TO_BE_REPLACED

From the Euphrates to the Mekong, dams that ensure one country's water supply risk leaving others parched. But shared water resources can be a source of peace as well as conflict ... END_OF_DOCUMENT_TOKEN_TO_BE_REPLACED

For over fifty years, British photographer Peter Sanders travelled across the Middle East and further afield, seeking out the saints of Islam. His work uncovers a little-known ... END_OF_DOCUMENT_TOKEN_TO_BE_REPLACED
Author:
Jean-Loup Samaan
Date:
Mail:
Send via mail

END_OF_DOCUMENT_TOKEN_TO_BE_REPLACED
Social media
and networks
Subscribe to our
newsletter