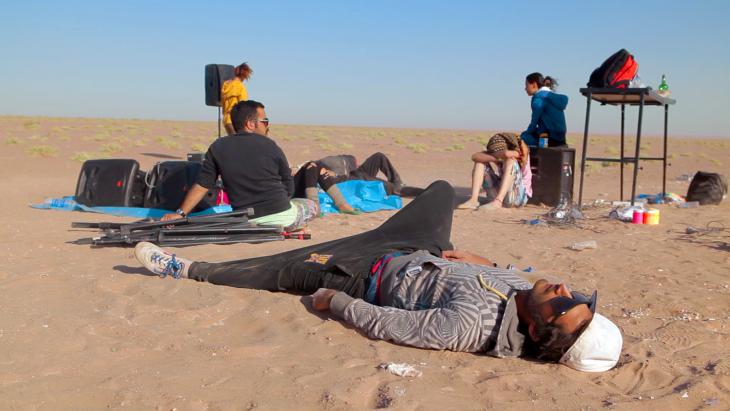 The film "Raving Iran" tells the story of the Iranian DJ combo "Blade & Beard". Anoosh and Arash produce house music and organise wild parties in Tehran and other more isolated locations in Iran. By Rene Wildangel

It has long been no secret that Iran has a huge underground scene beyond the strict regulations of the Islamic Republic. In Tehran in particular, there is a veritable parallel world where not only is the "western" culture so reviled by the state consumed, but also free creative spaces are nurtured.

It is a situation that is tolerated by the government to a certain extent, as the conservative leaders of the Islamic Republic are aware that large sections of the population do not support the officially proclaimed "pure doctrine" of strict Islamic values. But there are boundaries – and anyone who oversteps these too far ventures into dangerous territory. Such as "Blade & Beard", for example, with their wild parties. Whenever they work the decks, participants and organisers can face harsh penalties. The DJs themselves have also spent time in prison. Making music in Iran can quickly be avenged as a serious crime and not just in the movies.

When the DJs organise a party in the desert, the logistical effort matches that of an expedition to the Himalayas. Everything has to be planned down to the last detail and made to look as though this is just a few young people going on an excursion. Nothing must raise suspicion at checkpoints, the women must always have their chadors to hand to cover up their revealing party outfits. The location must be as remote as possible to avoid attracting any attention.

In Iran it is forbidden to play "western" music in public, female singers are taboo. These days, former female greats of the Iranian pop music world such as Googoosh don′t perform in Tehran but in exile centres such as Los Angeles ("Teherangeles" even has its own Wikipedia entry).

For artists who are unpopular with the authorities, performances as just as taboo as the releasing of albums. But "Blade & Beard" try their luck with music; or more accurately, perhaps, they try their luck with the purpose of gathering material for the film. After all, the "documentary film" (as it is officially described) by the Swiss director Susanne Regina Meures is essentially an intended provocation: Anoosh and Arash agreed to allow themselves to be filmed with a hidden camera for 18 months. 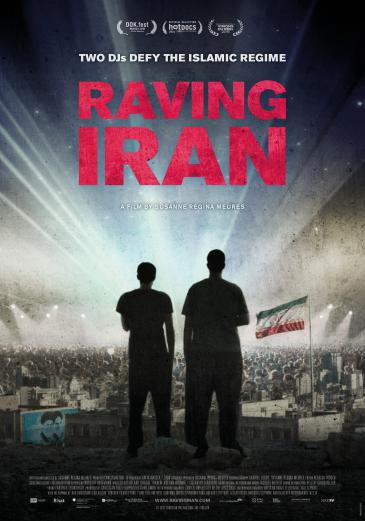 With "Raving Iran", Susanne Regina Meures has succeeded in making a moving film that avoids cliche. Blurring the boundaries between the documentary and fictitious elements is an effective filmic approach

This exposed both the film crew and its protagonists to significant risk. What would have happened had they been caught? "The problem in Iran is the arbitrariness. This makes it difficult to gauge the extent of the punishment we might have faced. It would certainly have been no laughing matter," says the director. Although the film story is clearly staged, this does little to rob it of its credibility.

And it provides rare insights into institutions such as the "Ershad" – the Ministry of Culture and Islamic Guidance, where anyone who wants to register a band or seek permission for a gig or recording release must present themselves. Strict moral codes must be followed in such cases.

Although the artists know they will not be able to register an "un-Islamic" band such as "Blade & Beard", they attempt it nevertheless and present their album cover to the relevant member of staff, clad in a black chador. Her response is not unfriendly, but sceptical and increasingly distrustful. "Beards and blades? Are you poking fun at people with beards? They might take it personally," she says lightly, before making it clear: "OK, there can't be anything western on it: no English."

Is it OK that the band has a female lead singer? The "Ershad" employee looks incredulously at the two. "Is that out of the question? Oh – and our singer has a piercing," says Anoosh. "Are you crazy?" she says, but also says: "The whole of Iran would like to have female singers." Which is certainly true.

There is no chance that the album and band will be officially authorised. So the duo must reproduce the album cover without permission and distribute their music to audiences illegally.

Most printers and copyshops in Tehran refuse: too risky. The business could be closed down for printing an illegal album cover. They do eventually find a printing shop, but few music shops that dare to sell the album – under the counter, of course. "I've just had to close my shop for a month," says one owner, "although I had a permit." "What kind of music was it then?" ask Anoosh and Arash. "Just regular metal," comes the response. But the heavy metal scene in Iran also runs risks.

"The Islamic Republic wants to be lied to"

In other shops they receive more pragmatic advice. It is suggested to the duo that they print two covers, a harmless one for display purposes and another for sale to interested customers. "That's how the Islamic Republic functions," says the owner. "It wants to be lied to." A hip cafe in Tehran agrees to play the CD now and again. But the owners are nevertheless cautious, because of regular police checks. "Haven't things got better under Rouhani?" "No, the same damned system as before," they say.

After a long night of partying, when the music was again not turned off quickly enough during a raid, the police detain Anoosh. He ends up in a cell and later reports that he was there with 70 dangerous criminals. The two musicians say they would like to be able to leave Iran and its absurd state controls.

Despite postal censorship, they send a few copies of their album to international festivals where they'd like to perform. They meet a trafficker to find out how they can leave Iran illegally.  He offers to help, but for a high price. For 100,000 tuman he can get everything, a fake passport, visa, health insurance, employment papers, bank statements.

Strangers in a strange place

Suddenly, the two receive a promising response. The Lethargy Festival in Zurich comes back with an invitation. It's probably no coincidence that the two are invited to Switzerland, in view of the fact that they are being accompanied and helped by the Swiss director. Anoosh and Arash are excited and full of hope. When the last step is completed and there's a Swiss visa in their passports, other fundamental questions arise. Is this their chance to leave Iran, forever? And is this what they really want?

Their trip to Switzerland – they received visas for just five days – is amazing: at last, people are dancing without any inhibitions to their tracks in Zurich's "Rote Fabrik" venue. Local radio stations broadcast interviews; they enjoy the whole experience. But they nevertheless feel like strangers in a strange place. They are overcome with homesickness. Right up until the final scene they hesitate: should they stay or go? They only decide in the taxi to the airport.

Their story is characteristic of the many Iranian artists and intellectuals who make huge sacrifices for their basic right to freedom of expression and artistic liberty. They generally want just one thing: to remain in Iran and achieve this there. But for most this is not possible, or they risk their lives in the process.

With "Raving Iran", Susanne Regina Meures has succeeded in making a moving film that avoids cliche. Blurring the boundaries between the documentary and fictitious elements is an effective filmic approach. The movie provides an insight into a contradictory nation with a society that by no means reflects the trite cliches of the mullah state, but that still restricts its predominantly young population in an unbearable fashion, forcing them into exile.

Home
Print
Newsletter
More on this topic
Music and power in Iran: An instrument of propaganda and controlFilm review: "No Land's Song": One woman's quest to make Iranian women's voices heardInterview with Ramin Sadighi from the Iranian music label Hermes Records: The fine line between what is permitted and what is not
Related Topics
Cinema, Hassan Rouhani, Iranian cinema, Iranian clerics, Iranian music, Musical worlds
All Topics

Mourad al-Marouai was just nine when a landmine killed him on a beach in war-torn Yemen, a tragedy that will haunt his family forever. After a swim, the little boy "suddenly ... END_OF_DOCUMENT_TOKEN_TO_BE_REPLACED

This year’s Morgenland Festival opened with the premiere of Kinan Azmeh’s musical theatre piece, “Songs for Days to Come”, based on fifteen poems by contemporary Syrian poets. ... END_OF_DOCUMENT_TOKEN_TO_BE_REPLACED

Rumi's poems, though generally stripped of their Islamic symbolism, are hugely popular around the world. Yet Islamic mysticism is still very much at the heart of these verses. ... END_OF_DOCUMENT_TOKEN_TO_BE_REPLACED

The Ukraine war is changing the global geopolitical landscape. Ali Khamenei, Iran's most powerful man, is already cosying up to Russia in anticipation of a harsh post-war reality ... END_OF_DOCUMENT_TOKEN_TO_BE_REPLACED

Analyst Iyad El-Baghdadi examines the ongoing tensions between the United States and the two Gulf states – Saudi Arabia and the UAE – and their geopolitical implications in ... END_OF_DOCUMENT_TOKEN_TO_BE_REPLACED

The Ukraine war has seen energy prices spike with oil producers in the Middle East making more money than ever. But will it put the brakes on long-planned reforms to diversify oil ... END_OF_DOCUMENT_TOKEN_TO_BE_REPLACED
Author:
René Wildangel
Date:
Mail:
Send via mail

END_OF_DOCUMENT_TOKEN_TO_BE_REPLACED
Social media
and networks
Subscribe to our
newsletter