"Don't You Believe in Sharia?"

Sharmeen Obaid-Chinoy, a young director originally from Pakistan, traveled back to her country to document the growth of Islamic fundamentalism there. Silke Kettelhake reports

Sharmeen Obaid Chinoy, a young director originally from Pakistan, traveled back to her country to document the growth of Islamic fundamentalism there. Silke Kettelhake reports 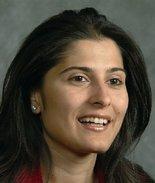 ​​Peshawar, in northwest Pakistan, is the stronghold of fundamentalists. On the streets you see only men, at the markets only men. Occasionally a completely veiled woman will hurriedly pass through the dusty landscape like an unwelcome foreign body.

On the adverting billboards in the city, the images of women have been defaced, shot at, and burned. Women are not to be seen, they have no right to exist in the city's public spaces.

But Sharmeen Obaid Chinoy, a young Pakistani woman who grew up in the United States and graduated from Stanford University, looks steadfastly through the camera. She knows what she's doing. She is youthful, wears a colorful dress, and pulls a scarf over her hair with grace.

She asks questions: why a wedding party is suddenly raided by the local police without warning, why music is forbidden, why oppressive silence is heard on the buses rather than the hum of folk music, why popular musicians no longer appear in public, why music and video cassettes are burned, why women are not allowed to work alongside men, why a poster painter says, "When I ask why my pictures are forbidden, I am put in jail."

A world ruled by the Taliban?

Sharmeen Obaid has a mission as she moves through this stretch of land increasingly dominated by the Taliban. Obaid grew up in jeans and with the music of "Guns 'n' Roses" in the background, but a large part of her family still lives in this region of Pakistan along the border to Afghanistan:

"I don't want my daughter to grow up in a country that has lost all traces of humanity," she says during our interview. "What the Taliban have done to the Pakistani people is irresponsible and unjust. I want to know why they are doing this, why they are successful, and who has to suffer because of it?"

But Sharmeen Obaid persists. She is unimpressed with his closed chain of arguments. She hopes that Sami al Haqq's confident prognosis that the Taliban will soon rule the entire Arabic world is merely the dream of a few old men.

She counters his self-righteousness with charm. She shows how things are when the separation between religion and the state is suspended, her aim is to root out the violent madness as she watches a demonstration of how fast lethal weapons can be manufactured by hand, when rapid-fire guns are shot into the air from a corner of the market and make the houses shake. Osama Bin Laden posters are still hot on the market here.

Sharmeen Obaid doesn't seem very afraid: "Once I was scared, at an Islamic demonstration. The camera was aimed at me, I was the only woman in the streets, which were full of agitated men. And it is not only in Peshawar that they don't like cameras…"

"The burka will make you blind"

Thinking back to a conversation with Razia Aziz, a woman in the National Assembly, she shakes her head in disbelief. "A woman should know her limits," Aziz had told her.

She says she feels free to move as she pleases, free to think. "What kind of freedom is it when you are heavily veiled all they way to your eyes?" Sharmeen Obaid says indignantly in our interview. Those reactionary words, particularly from a woman, can still ignite her two years after the film was finished.

Because the burka is apparently the "fashion statement" of her country, Obaid suffered the trendy plumeau with a small window that cages the eyes:

"Under the burka I could hardly imagine how women are supposed to get air. The burka makes you blind, you can only see the things right in front of you, you can't look left or right, pretty dangerous on the street in traffic. I no longer felt like a human being, but like an alien, in disguise. I can't imagine that Pakistani women accept the burka."

Pakistan will slowly wake up

In Lahore, in the northeast of the country, she takes a look backstage at a fashion show and questions the models who are exhibiting the Western chic: about their lifestyles, their expectations—far away from the dusty streets with loud male demonstrators.

Here Obaid meets representatives of a rather progressive branch of Islam. But the Alhambra Art Center is closed, there are few shows in the theater, and independent journalists receive death threats.

Re-Inventing the Taliban shows how deep the international machinations of the conflict reach, as President Musharraf supports the British and American troops in their war against Islamic terrorism.

And, in addition, Pakistan is the only Islamic country with a nuclear weapons program. Sharmeen Obaid comments: "The USA has not effectively followed their objectives, the Taliban are left to develop further, fundamentalists are sitting in Pakistan's Parliament. Pakistan is fighting a war for the US government that cannot be won. We are doing the dirty work for them."

But she has hope for her country: Pakistan will slowly wake up, step by step, of this she is sure: "One has to believe this, we can't just give up. We don't want a catastrophe in this part of the world! Pakistan has atomic bombs!"

Interview Siddiq Barmak
An Afghan View of Suffering
"Osama" is the first full-length film to emerge from Afghanistan since the fall of the Taliban regime. It is an attempt to come to terms with the country's history – and it already won a Golden Globe Award. Amin Farzanefar spoke with the film's director, Siddiq Barmak

Ken Loach's "Ae Fond Kiss"
A Love Story between Two Cultures
Ken Loach's latest film deals with a love story between a Catholic Irish woman and a Muslim Pakistani – and looks at the balancing act between love and family loyalty. Ernst Kramer discusses the film

END_OF_DOCUMENT_TOKEN_TO_BE_REPLACED
Social media
and networks
Subscribe to our
newsletter