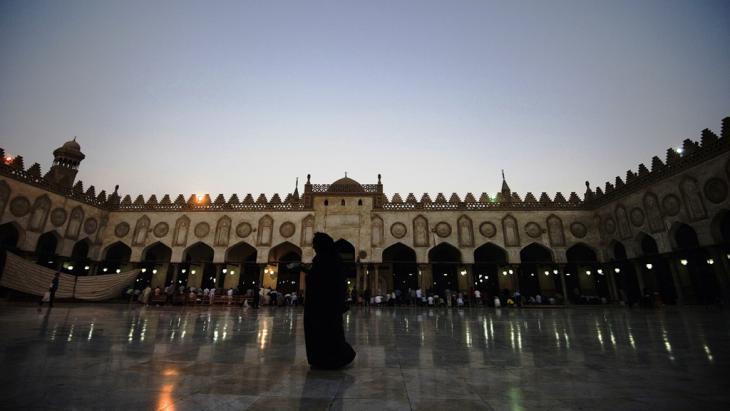 In the wake of the horrific attack on the staff of "Charlie Hebdo" in Paris on 7 January, Islamic associations and imams across Europe have condemned the killings. So too have politicians and religious dignitaries across the Islamic world. But, says Karim El-Gawhary in Cairo, for some people in the Arab world, things are not quite so black-and-white

From Azhar University in Cairo, one of the highest authorities in Sunni Islam, to the Arab League and the journalists' associations in the Arab world, the attack on "Charlie Hebdo" in Paris has been condemned as a criminal act that is incompatible with Islam.

At the same time, some rather different responses have been made by people in Arab media: speaking on Egyptian television, TV commentator Tamer Amin said: "the West is now drinking from the same glass as the Egyptians".

Statements such as these show that some Egyptians feel that the events in Paris are evidence of the need for the strict crackdown on terrorism in their country. Regrettably, said Amin, Europe has repeatedly accused the Egyptian government of fighting terror with dictatorial means. Now, he continued, Europe is getting a taste of that terror itself.

The repressive Arab states see the events in Paris as a justification for their policies. At the same time, however, they are careful not to adopt a position on freedom of expression where religion is concerned. "Unfortunately, some Western media see freedom of expression as a kind of religion. It's considered sacrosanct. They can say what they like in the West," continued Amin, going one step further: "They deserve what happened. I always say there can be no unrestricted freedom of expression. Everything in the world comes with responsibility and red lines." 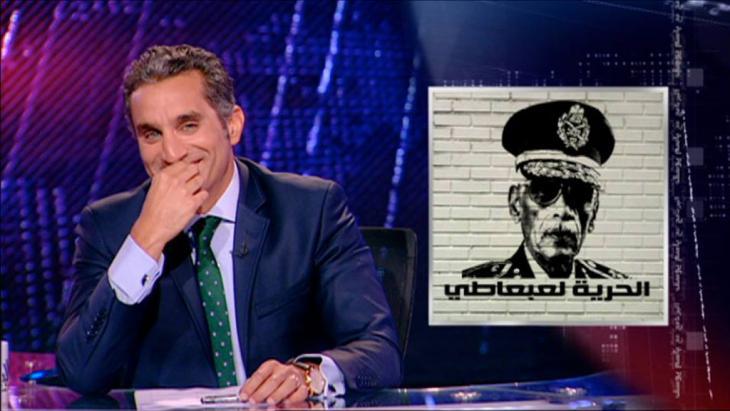 Bassem Youssef, pictured here during an episode of his satirical programme "Al-Barnameg", stopped producing "Al-Barnameg" because he feared for his safety and that of his family. Speaking at a press conference in Cairo in June 2014, he said that the pressure on him and the Saudi-Arabian broadcaster MBC had become too severe

No differentiation between victims and perpetrators

Bizarrely, the popular regime-friendly Egyptian broadcaster On-TV even went as far as to equate the killers and the journalists at the satire magazine who attacked Islam. "Radicals killed radicals," was how host Yussuf El-Husseini put it. There was no difference between the two, he claimed, although he did emphasise that spilling blood was not a solution.

The West does not have a monopoly on people being attacked by militant Islamists for their opinions and creative work. Most victims come from the Islamic or Arab world themselves, the most prominent example being the now deceased Nobel Literature laureate Naguib Mahfouz. In his book "Children of Gebelawi" he describes several prophets living together. Behind Adham, Gabal, Rifaa and Kasim, with whom he symbolically depicts human history on one street, are Adam, Moses, Jesus and Muhammad. This depiction of the prophet, albeit literary, was reason enough for militant attackers to stab the writer in the neck in 1994. Mahfouz was seriously injured but survived the assassination attempt.

Two years previously, the Egyptian journalist Farag Foda had been shot dead by members of the militant group Gamaa Islamiya. He was well known for his biting articles and satires against radical Islamists. He wanted, he said, to protect Islam from the radicals' distortions; he paid for it with his life. 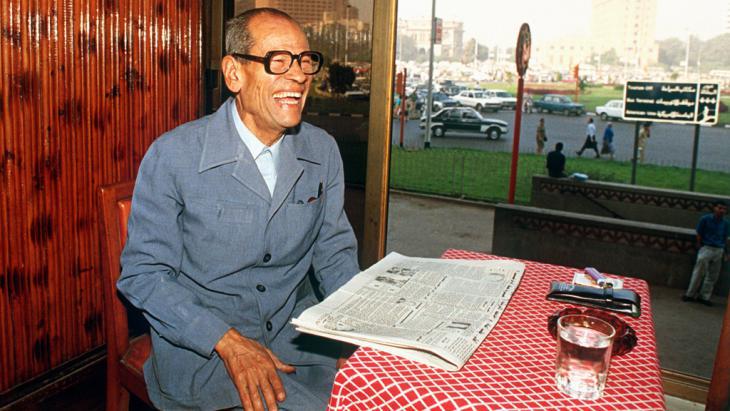 In 1994, Nobel Literature laureate Naguib Mahfouz (pictured here) was stabbed in the neck by Islamist militants angered by his work. "The West does not have a monopoly on people being attacked by militant Islamists for their opinions and creative work. Most victims come from the Islamic or Arab world themselves," says Karim El-Gawhary

In the four years since the uprisings in Tunisia and Egypt, satire has experienced a boom in the Arab world. However, the king of Arab satire, the Egyptian Bassem Youssef, was dropped by his Saudi channel MBC after an intervention by the Egyptian military regime. His show went too far for the ruling elites.

But satire directed at militant Islamists is still a hit in the Arab world. Its most recent target has been the self-appointed jihadis of Islamic State. One popular example is the Iraqi series "State of Myths". The title comes from an Arabic pun, changing "Daulat Al-Khalifa" (state of the caliphate) to "Daulat Al-Khurafa" (state of myths).

The series ridicules the militants' entire ideology. In one scene, for instance, the self-appointed guardians of Islam come to a greengrocer and demand that he separates male and female vegetables strictly according to their grammatical gender in Arabic.

This is satire on the frontline: the 30 episodes of the series broadcast on Al-Iraqiya can also be viewed inside territory controlled by Islamic State. All the actors know they would pay for their roles with their lives if the IS jihadis advanced to Bagdad; one reason why some of the scriptwriters prefer to remain anonymous.

The Lebanese TV station LBC also broadcasts anti-IS sketches. In one of them, a scared Christian couple is driving along a country road and arrives at an IS roadblock. "If you're Christian, Shia or apostates, we will slaughter you," threatens the leader with the stick-on beard. "Quote a verse from the Koran," he orders the driver. The man starts quoting and the IS commander breaks out in a smile. "They're Muslims, let them pass," he instructs his men.

As they drive off, the woman turns to her husband in surprise. "You didn't quote from the Koran. That was from the Bible, so why are we still alive?" The man answers with a grin: "If they knew the Koran they wouldn't be slaughtering anybody." In the background, the jihadis give a friendly goodbye wave.

Home
Print
Newsletter
More on this topic
Attack on the French satirical magazine "Charlie Hebdo": Do not be deceived!Egypt in turmoil: Against the tide of hatredFighting Islamic State with satire and black humour: Terribly funny
Related Topics
'Islamic State' | IS, Bassem Youssef, Charlie Hebdo, Freedom of the press, Front National, Islamism | Political Islam, Jihadism | Jihadists, Media in the Arab World, Muslims in the West, Satire
All Topics

Algeria‘s regime is again cracking down on anti-fracking activists and the unemployed in the country‘s south. Yet EU countries remain keen to scale up their energy cooperation ... END_OF_DOCUMENT_TOKEN_TO_BE_REPLACED

The murder of a female student at Mansoura University in the Nile Delta has sparked a long overdue debate on femicide in Egypt. Karim El-Gawhary reports from Cairo END_OF_DOCUMENT_TOKEN_TO_BE_REPLACED

Syria, Egypt, Saudi Arabia and the UAE are among those countries increasingly misusing cybercrime legislation to silence dissent and curb freedom of speech. Could a new global ... END_OF_DOCUMENT_TOKEN_TO_BE_REPLACED

Egypt hopes to jump-start the action needed to face a warming world when it takes the presidency of major UN climate talks in November, but warns that countries need a "reality ... END_OF_DOCUMENT_TOKEN_TO_BE_REPLACED

A ceasefire has been in effect in Libya for the past year and a half. Yet after Russia's attack on Ukraine, another proxy war looms in Africa's most oil-rich country. Mirco ... END_OF_DOCUMENT_TOKEN_TO_BE_REPLACED

It is the biggest order in the history of the Siemens Group: a 2,000-kilometre railway network for high-speed trains is to be built in Egypt. But the project raises numerous ... END_OF_DOCUMENT_TOKEN_TO_BE_REPLACED
Author:
Karim El-Gawhary
Date:
Mail:
Send via mail

END_OF_DOCUMENT_TOKEN_TO_BE_REPLACED
Social media
and networks
Subscribe to our
newsletter