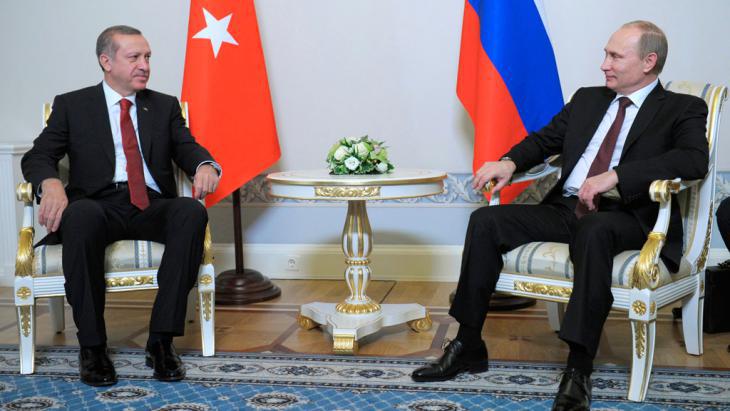 While the Turkish president is hoping his party will win an absolute majority in the upcoming parliamentary elections, the Russian head of state has long since eliminated all opposition in his country. There is much that unites these two men – but much that divides them too on a political and biographical level. By Cigdem Akyol

They divide their nations, so deeply are they loved and hated. To their supporters, they are saviours, men who have finally given them back their pride. To their opponents, they are dictators, who do not even shrink from waging war. Turkey's President Recep Tayyip Erdogan and his Russian counterpart, Vladimir Putin, are probably the politicians who most define the current era. It is their decade, and it is still not clear how it will end for either of them.

The head of the Green Party in Germany, Cem Ozdemir, says that Erdogan's Turkey now reminds him of "Putin's Russia". Like Putin, he says, Erdogan takes a "wrecking ball" to democratic institutions. This kind of comparison keeps cropping up again and again. The British newspaper "The Guardian" called Erdogan and Putin "The two angry men on Europe's borders: loud, proud and impossible to ignore."

These two charismatic men are brimming with self-confidence; they can't estimate their own significance highly enough. The statesmen see themselves as the architects of new political and social orders, and are working to secure their place in the history books. They are united in their longing for the former greatness of the Ottoman Empire and the Soviet Union. This is why Erdogan is demanding that Turkish schools start teaching Ottoman Turkish again, while Putin has reintroduced the old Soviet anthem with the melody from the Stalin era.

Their deep faith in Sunni Islam and Russian Orthodoxy respectively, and their hyper-nationalism, represent more common ground. Erdogan has recently starting making occasional public appearances with a Koran in his hand, campaigning for the governing AKP party that he co-founded in 2001. Putin celebrated the start of his first term as president in 2000 by attending a church service. But above all, they share the aim of wanting to exact revenge for past abuse, whether real or imagined. 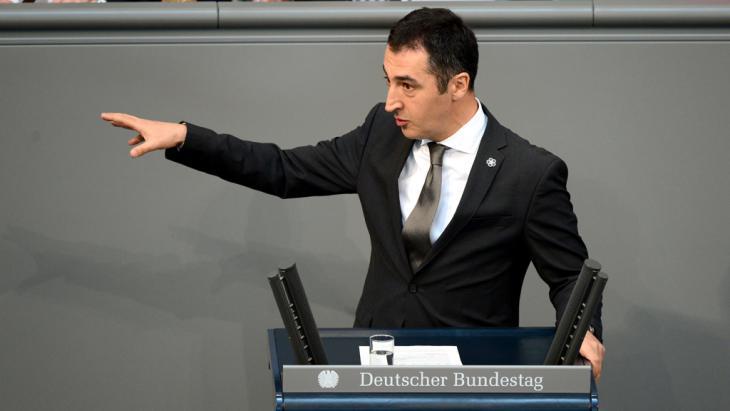 Open criticism of Erdogan's authoritarian style of rule: Cem Ozdemir, head of the Green Party in Germany (pictured here), has said that Erdogan's Turkey now reminds him of "Putin's Russia". Like Putin, he says, Erdogan takes a "wrecking ball" to democratic institutions

Overcoming all resistance to rise right to the top

To understand the logic of these two men, one has to look to their past: Erdogan, who was born in 1954 in Kasimpasa, a working-class district of Istanbul, had to sell sesame rings as a child to support his parents financially. It was here in Kasimpasa that he learned to assert himself with his fists, understanding that only those who could strike out successfully were not oppressed. This explains why his supporters uses phrases like "Well, he is from Kasimpasa" to excuse his irascibility and his provocative choice of words.

Putin, born in 1952 in St. Petersburg, also grew up in impoverished conditions. He says of his childhood that he learned early how to escape from his opponents. "Rats made their home in the stairwell. Once I found a huge rat and started pursuing it until I had driven it into a corner. Then it suddenly reared up and attacked me. Now the tables had turned and it was hunting me! But I was too quick and slammed the door in its face."

Two formative events stand out in their respective political biographies: on 17 September 1960, Turkish Prime Minister Adnan Menderes was hanged by the junta following a military coup. The young Recep found a photo of Menderes in his father's newspaper: he was still alive, but had the noose around his neck. "At the time I didn't understand much. But I could see that my father and mother were very upset to see this man going to his death," he said later, as head of the government.

For Putin, a former KGB agent, the collapse of the Soviet Union was a shock he would never forget. "State power was crippled," he said later about the collapse of the empire, which he saw as the "greatest geopolitical catastrophe of the twentieth century".

The men from Istanbul and St Petersburg believed they had learned one thing: weakness makes you vulnerable to attack. This is why they paint themselves as the tireless servants of their nations. In order to connote strength, physical fitness is part of their personal PR. But unlike Putin, Erdogan can't show himself diving underwater. The Turk, who almost had a career as a professional footballer, would alienate his core voters – devout Muslims – if he were to appear semi-naked. 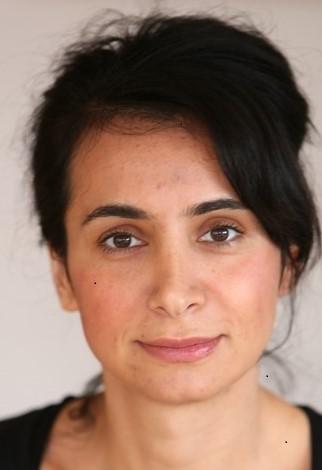 Cigdem Akyol (pictured here) studied Eastern European history and international law at the University of Cologne. She was an editor at the Germany daily newspaper "taz" from 2006 until 2014, when she became a correspondent for German-language media in Istanbul. Her book "Generation Erdogan" was published in Germany in February by Verlag Kremayr & Scheriau

Both Erdogan and Putin have rebuilt the system to suit their needs. They believe basic democratic rights like freedom of the press, free speech and the right to demonstrate are a threat to their power, and so they have gradually dismantled them.

They feel betrayed by the West. "The people who come to the Islamic world from outside like oil, gold and diamonds, they like cheap labour, and they like conflict and dispute. But believe me, they don't like us," said Erdogan at the end of November in Istanbul. "Twenty-five years after the fall of the Iron Curtain, the West should stop building new walls against Russia," Putin urged at his annual press conference in Moscow in mid-December.

Both Erdogan and Putin are conspiracy theorists who see enemies everywhere – whether in their own countries or abroad. During the Gezi Square protests, Erdogan showed that he does not tolerate any kind of criticism from anyone. Putin even annexed the Crimea as a show of strength, and to distract from his domestic policy difficulties. Since then, in the German-speaking world, the term "Putinversteher" (somebody who understands Putin) has become either an insult or a compliment, depending on your viewpoint. So far, however, the term "Erdoganversteher" hasn't caught on.

But even though their definitions of democracy are almost identical, there are also differences of political opinion. They are particularly at odds over the issue of Syria. Russia is one of Bashar al-Assad's few allies; since 1971, Syria has been home to the Russian navy's only base in the Mediterranean. Before the presidential elections in June 2014, Moscow is said to have transferred €175 million to the regime in Damascus.

Fallen out of favour

The Erdogan and Assad families even spent a few days holidaying together in the Turkish seaside resort of Bodrum in 2008. But then, in March 2011, the Syrian civil war began. At the start of the conflict, Erdogan tried to persuade his friend to institute reforms. And Assad did in fact make some pledges, which Erdogan publically praised, only to discover later that the Syrian was not keeping his promises.

Since then, Turkey has been among Assad's most resolute opponents, with Erdogan even threatening an intervention. Despite this difference, the strong men in Ankara and Moscow mostly work well with each other. After Germany, Turkey is the largest consumer of Russian gas, buying 65 per cent of the gas it uses from Russia.

After Pope Francis, Putin was the second prominent guest to be hosted by Erdogan in his ostentatious palace in Ankara in December last year. Afterwards, the Russian made a surprise announcement that he was scrapping the planned South Stream Pipeline through the Black Sea, which was to supply southern and south-eastern Europe with Russian gas. Instead, he said, they would focus on co-operating with Turkey and would build a gas transhipment point near the border with Greece.

Moreover, Turkey is profiting from the sanctions against Moscow, which the EU imposed in response to the Crimean conflict and the crisis in Ukraine. The sanctions mean that the export of Turkish food to the east has increased significantly over the past few months – and both countries have agreed to increase their trade in gas and food even further.

In light of this magnificent economic relationship, Ankara regarded Putin's recent recognition of the genocide against the Armenians – otherwise a very sensitive subject in Turkey – as almost an irrelevant detail.

Home
Print
Newsletter
More on this topic
Rapprochement between Erdogan and the Turkish Army: Short-term tactic or long-term strategy?Turkey's mosque-building programme: Does Turkey aspire to the leadership of the Islamic world?Crimean Tatars in Ukraine: Deep-seated fearsInterview with Stefan Meister: "The Syria crisis is legitimising Putin"Turkey and the alliance against IS: Of inaction and double standards
Related Topics
Assad regime, Freedom of the press, Gezi Park protests, Islam and the West, Media in Turkey, Recep Tayyip Erdogan, Turkish opposition, Vladimir Putin
All Topics

Despite what heads of state may claim, the Russian attack on Ukraine is not a wake-up call for a self-confident Europe that defends its values. The war is accelerating the decline ... END_OF_DOCUMENT_TOKEN_TO_BE_REPLACED

At the EU's outer borders, the right of migrants to a fair asylum procedure continues to be systematically disregarded. Take Greece, for example: in the worst case scenario, those ... END_OF_DOCUMENT_TOKEN_TO_BE_REPLACED

Madrid's about-face on the Western Sahara conflict has enraged Algeria. Trade relations have been frozen unilaterally and a cut in gas supplies to Europe could be in the pipeline ... END_OF_DOCUMENT_TOKEN_TO_BE_REPLACED

Mourad al-Marouai was just nine when a landmine killed him on a beach in war-torn Yemen, a tragedy that will haunt his family forever. After a swim, the little boy "suddenly ... END_OF_DOCUMENT_TOKEN_TO_BE_REPLACED

A ceasefire has been in effect in Libya for the past year and a half. Yet after Russia's attack on Ukraine, another proxy war looms in Africa's most oil-rich country. Mirco ... END_OF_DOCUMENT_TOKEN_TO_BE_REPLACED

The Ukraine war has seen energy prices spike with oil producers in the Middle East making more money than ever. But will it put the brakes on long-planned reforms to diversify oil ... END_OF_DOCUMENT_TOKEN_TO_BE_REPLACED

And what has Western Democracy delivered?

And what has Western Democracy delivered post Libya. ISIS!

A very pro-western & biased description of the two men. Although, I am not a fan of Erdogan, both of them have re-built the economy & the prestige of their countries. Contrary to what has been written above, they are definitely not after personal glory, which comes naturally to patriotic and honest
leaders.

END_OF_DOCUMENT_TOKEN_TO_BE_REPLACED
Social media
and networks
Subscribe to our
newsletter