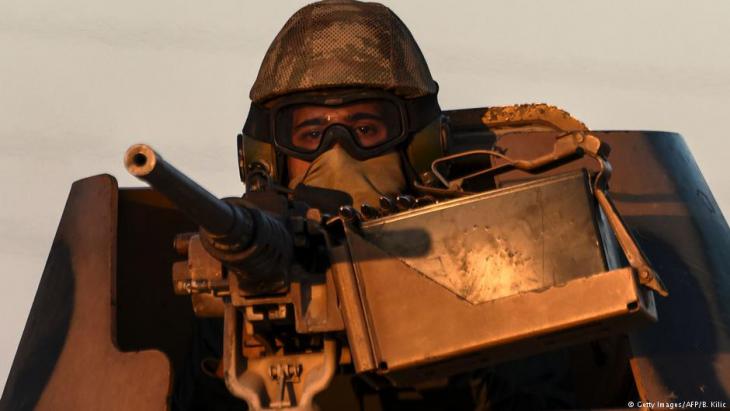 Turkey′s armed forces chief is due to visit Tehran this week, the trip is the latest by the region′s top generals in and out of Ankara. This military traffic is being seen as evidence of a foreign policy increasingly dictated by security concerns, last seen in the 1990′s. Dorian Jones reports from Istanbul

This week the semi-autonomous Iraqi Kurdistan regional government got a taste of Turkey′s robust foreign policy. On Monday, the Turkish army started an unannounced major military exercise on the border with Iraqi Kurdistan, a move widely interpreted as a warning by Ankara not to hold the region′s planned independence referendum on 25 September. Regarding Ankara′s response to the referendum vote, the Turkish prime minister Binali Yildirim declared on Monday that Turkey ″would take all necessary measures.″

The use of military muscle in Turkish foreign policy is underlined by the planned visit of armed forces chief Akar to Tehran. Akar will lay down the groundwork ahead of Turkish President Recep Tayyip Erdogan′s trip scheduled for early October. 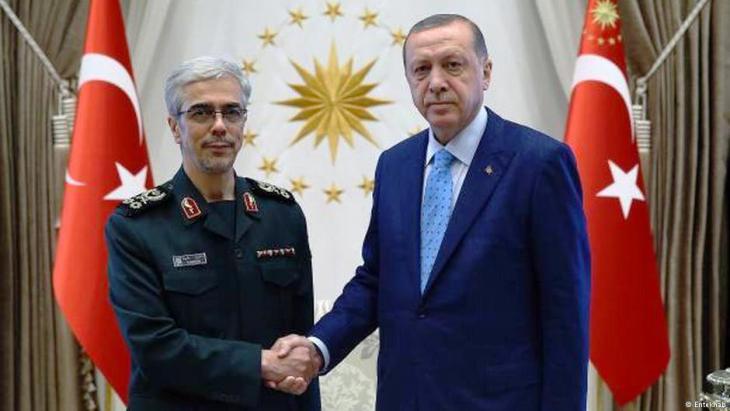 Forging new alliances: "Erdogan argues that it is the failure of Turkey′s NATO partners to act as allies in helping the country confront current threats that is forcing his hand. But Turkey and the wider region could ultimately end up paying a high price," argues Jones

″Our chief of staff will travel to Iran prior to my visit to hold preliminary talks,″ Erdogan said.

Such a role is traditionally assigned to the foreign ministry. And yet, a military perspective in foreign policy is nothing new for Turkey. ″In the nineties, Turkish foreign policy and Turkish security policy was very much intertwined,″ recalls retired Turkish ambassador Cevikoz, who now heads the Ankara Policy Centre.The 90′s were the zenith of Turkey′s war against an insurgency by the PKK that is fighting for Kurdish autonomy. Ironically Turkey′s military-driven foreign policy changed with the coming to power of Erdogan′s AK party in 2002. The AKP was committed to curbing militarism, a change made easier with the PKK being firmly on the back foot following the 1999 capture of its leader Abdullah Ocalan by Turkish security forces.

The instability generated by the Syrian civil war has provided powerful impetus for a reset in Turkish foreign policy. ″The expansion of the Syrian civil war and the fact that international terrorism found fertile ground there gave Ankara strong reasons for rethinking its national security policies,″ argues Cevikoz, who served as ambassador in Iraq. The security challenge posed by Syria was exacerbated by a vicious upsurge in fighting with the PKK following the 2015 collapse of an Ankara-backed peace process.

A large swathe of Syrian territory on Turkey′s border is under control of a Syrian Kurdish militia – the YPG – which Ankara accuses of being affiliated to the PKK. The Turkish government claims the country is facing the unprecedented threat of the creation of both an Iraqi and Syrian Kurdish state on its border, which it fears could fuel secessionist demands among its own restive Kurdish minority. 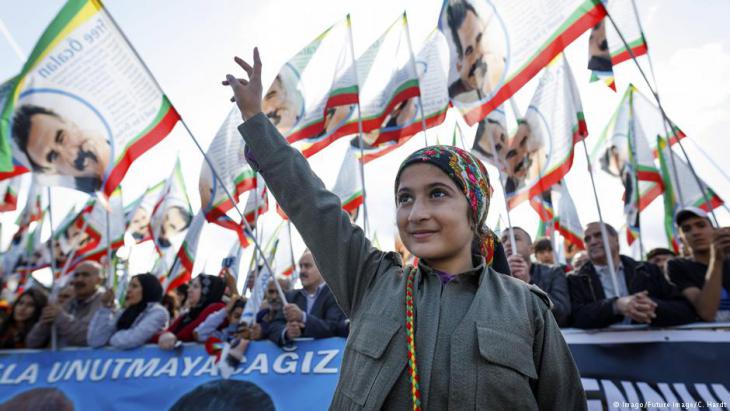 Has the Kurds' moment finally come? The Turkish government claims the country is facing the unprecedented threat of the creation of both an Iraqi and Syrian Kurdish state on its border, which it fears could fuel secessionist demands among its own restive Kurdish minority

Such fears are stoking Turkish nationalism, always a powerful force in Turkey. These fears are being aggravated by the fact that several of Turkey′s western allies led by the United States are arming the YPG in its fight against Islamic State.Election politics are also a powerful force behind Turkey′s new foreign policy. The nationalist vote is a key part of Erdogan′s electoral base – a fact not lost on the president, who has his sights fixed firmly on the 2019 presidential elections.

″With the presidential elections looming large, president Erdogan is keen on repeating that when it comes to Turkey′s future, Turkey′s defence, no membership of an international organisation – no international law – no outside connections will influence Ankara. Ankara will act on its own,″ observes former senior Turkish diplomat Aydin Selcen, who served as Turkey′s first consul-general in Erbil, the capital of Iraqi Kurdistan.

′An English spy under every stone′

Pandering to Turkish nationalist sentiments, Turkey′s pro-government media – awash with stories of spies and conspiracies – are quick to slam the country′s western allies. More than a dozen jailed European nationals, mainly from Germany and including several journalists, are routinely denounced by Erdogan as spies.

Such allegations stoke age-old fears in Turkey. Turkish children are still taught that European spies were responsible for the downfall of the Ottoman empire. ″An English spy lurks under every stone,″ remains a popular adage. 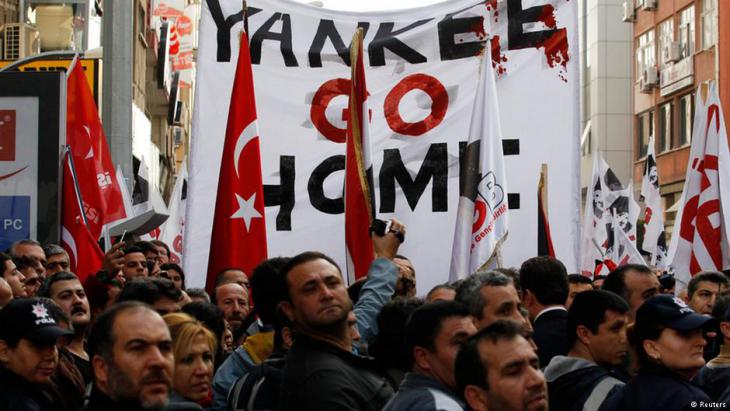 Is Turkey really willing to got it alone? Erdogan's recent overtures towards the heads of the Russian and Iranian armed forces would seem to suggest otherwise. Still the NATO member could be risking a lot, just for the sake of being regarded as a ″strong and independent country″

Feeding public distrust of Turkey′s western allies helps Ankara to dismiss international criticism over its human rights record, as well as justifying reaching out beyond its traditional alliances.

The decision to buy Russia′s S400 sophisticated missile defence system in the face of strong public pressure from Washington, was portrayed by Erdogan as Turkey being a ″strong and independent country.″

But analysts point out that, at the end of the day, Ankara still needs its western allies: ″the fact is that Turkey is a member of NATO, which means Turkey′s defence cannot be conceived without NATO support,″ warns former senior Turkish diplomat Selcen.

Erdogan argues that it is the failure of Turkey′s NATO partners to act as allies in helping the country confront current threats that is forcing his hand. But Turkey and the wider region could ultimately end up paying a high price.

″If Turkey is serious about this shift in foreign policy, it will have to co-operate with countries like Iran and Russia, neither of which are allies of Turkey,″ warns former ambassador Cevikoz. ″Such an arrangement would be risky – at some point, Turkey could find itself a lone wolf in the region.″

In the run-up to Iran’s parliamentary elections on 21 February, state media was at full blast. Urging Iranians to take to the polls, state TV’s Channel 1 ran an election-day ... END_OF_DOCUMENT_TOKEN_TO_BE_REPLACED

The 2015 Joint Comprehensive Plan of Action with Iran is in jeopardy. European governments should use the JCPOA’s dispute-resolution mechanism both to pursue immediate measures to ... END_OF_DOCUMENT_TOKEN_TO_BE_REPLACED

Mullahs, dictatorship, nuclear conflict – Iran could be reduced to these keywords if one were to rely only on the articles in the daily press. But to really understand a country ... END_OF_DOCUMENT_TOKEN_TO_BE_REPLACED

Many predominantly Muslim countries have penal laws against "blasphemy", "defamation of religion" and "apostasy". In practice they serve as highly effective weapons to settle ... END_OF_DOCUMENT_TOKEN_TO_BE_REPLACED

Iranian-German artist Parastou Forouhar, resident in Germany since the 1990s, is known for her idiosyncratic drawings, photographs, installations and animations. ... END_OF_DOCUMENT_TOKEN_TO_BE_REPLACED

These days you might be forgiven for wondering whether international relations would be better served by artists than politicians. Iranian Kayhan Kalhor, a bridge builder from the ... END_OF_DOCUMENT_TOKEN_TO_BE_REPLACED
Author:
Dorian Jones
Date:
Mail:
Send via mail

END_OF_DOCUMENT_TOKEN_TO_BE_REPLACED
Social media
and networks
Subscribe to our
newsletter