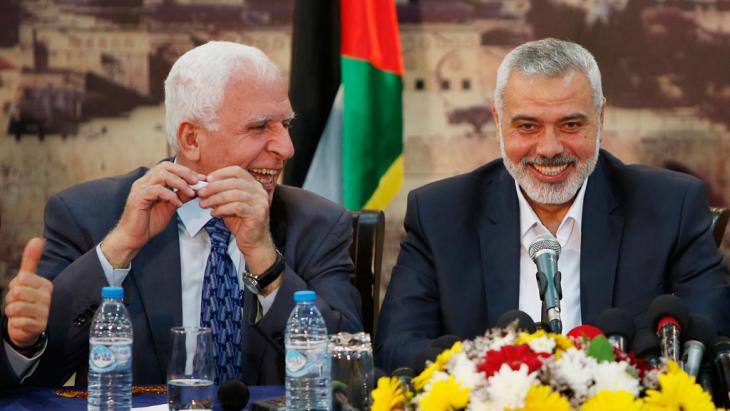 Reconciliation between Hamas and Fatah
No peace without Palestinian unity

The Palestinian organisations Hamas and Fatah plan to seal an alliance with each other – primarily out of necessity. Reconciliation is difficult; the danger of failure is great. It is for precisely this reason that the US and Europe should support the process. A commentary by René Wildangel

US Secretary of State John Kerry's attempt to resolve the Middle East conflict has failed. There is no peace deal between Israel and the Palestinians, not even a simple "framework agreement"; since the start of the peace process, the positions of the Israeli government and the PLO have never been so far apart.

On the Israeli side, this is first and foremost due to the fact that the government is more firmly anchored to the right of the political spectrum than ever: the hardliners in the strongest faction, the right-wing bloc led by the head of government Benjamin Netanyahu and the settlers' party Ha-Beit ha-Yehudi ("The Jewish Home"), have been setting the tone since the last elections. It is barely conceivable that a compromise could be reached with them.

This has served to further weaken the Palestinian leadership. In any case, Palestinian President Mahmud Abbas lacks political legitimacy and has been governing virtually by emergency decree since 2009. The last election took place in January 2006 when the poll was won by Hamas; no regular parliamentary or presidential election has been held since. And now, after nine months of negotiations with Israel, Abbas has come away empty-handed.

This is the background to the surprising agreement for intra-Palestinian reconciliation, which bears the name "Al-Shati", the name of the refugee camp where Ismail Hanija comes from, the Hamas prime minister currently governing in Gaza. The agreement represents an attempt by the Abbas and his blighted Fatah party to take the bull by the horns.

However bad it may be for Fatah, things are looking even worse for Hamas, which governs in the Gaza Strip. The military coup in Egypt against the Muslim Brotherhood robbed it of its most important ally. What's more, the new military government in Cairo has destroyed the lifeline of the Gaza Strip, the tunnel economy. Since then, Gaza has been suffering under a double blockade, because Israel only allows the very limited transit of people and goods to and from the Gaza Strip. 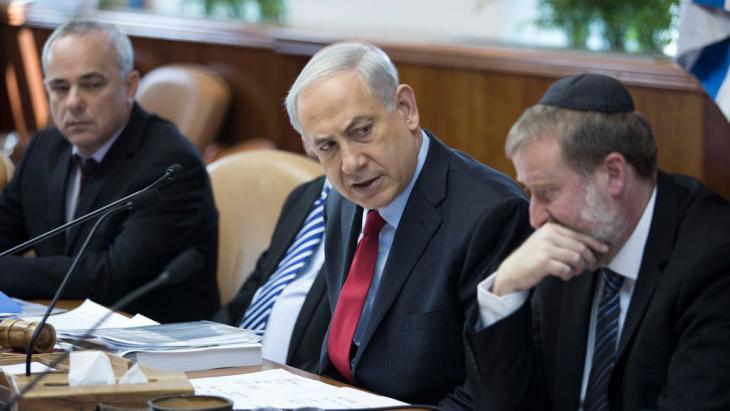 "Rip up your agreement with Hamas!" Israeli Prime Minister Benjamin Netanyahu has stressed his unwillingness to negotiate with a Palestinian leadership that is associated with Hamas

Hamas is pursuing its conservative-Islamic agenda in an authoritarian and repressive manner, which has cost it dear in the popularity stakes. Above all, however, it lacks both the money to pay its administrative officials in Gaza and the competence of a governing party committed to the welfare of the people.

The alienation has increased, and the wounds are deep following violent clashes and mutual assignations of blame. Several agreements have already failed, even though there is overwhelming public support for the idea of reconciliation.

Reconciliation between Hamas and Fatah: the key to peace

The plan now is to form a "government of technocrats" containing no party members. Although Hamas refuses to formally recognise Israel, President Abbas has announced that this government should accept the three conditions established by the Middle East Quartet in 2007: recognition of the state of Israel, the acceptance of all past peace deals between Israel and Palestine and the renunciation of violence. Then, after six months, free elections should be held in Palestine. It is impossible to know at this stage whether this plan will succeed. Not only are the individual interests of both parties an impediment to progress, Israel could also move to scotch an election in East Jerusalem.

The Israeli Prime Minister has announced he will not negotiate as long as a government of "Hamas terrorists" that seeks to destroy Israel is supported by Fatah. This is barely credible: Israel has already negotiated with Hamas in the past. Moreover, Hamas is no longer the same terror organisation that derailed the Oslo peace process by committing terrible suicide attacks in Israel.

Since the war in Gaza in 2012, it has been making a considerable effort to curb rocket attacks by other radical groups such as Islamic Jihad and to maintain the ceasefire agreed with Israel. It is also the case that the party did not simply reject the Kerry talks, but demanded that the Palestinians be given the chance to put any potential agreement to the vote. Numerous Hamas leaders have also – at least indirectly – accepted the 1967 borders and thereby the two-state solution. 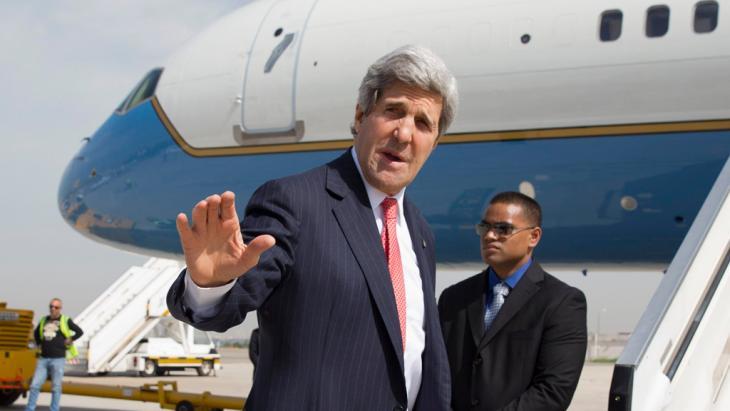 Another failed attempt at securing peace in the Middle East: US Secretary of State John Kerry puts the failure of peace talks down to three things: the fact that Israel went back on its pledge to release the last group of Palestinian prisoners, the fact that the Palestinians reneged on agreements by applying for membership of 15 international organisations, and the fact that Fatah has reconciled with Hamas without prior warning and approval

Shared EU and US responsibility

The EU should demand that the two big Palestinian parties and Israel implement the reconciliation agreement. After all, the EU and the US are partly responsible for the disastrous developments that followed the elections of 2006 when they initially celebrated the elections as fair and democratic but then refused to recognise the election winners, Hamas, thereby helping the Islamists to portray themselves as political martyrs.

At the time, the US armed the security forces in the West Bank in the hope that Hamas could be overpowered. The Islamist party was brutally suppressed in the West Bank; numerous Hamas politicians, including elected deputies, disappeared without trial into Israeli prisons. But the blockade of the Gaza Strip failed: Hamas still governs to this day. It is the 1.7 million people who live there – most of whom are young people – who are paying the price of this policy.

Increasing human rights violations and authoritarian tendencies in the West Bank are just as alarming as the Hamas police state in the Gaza Strip. This means that the reconciliation process is the only way to reunite the divided Palestinian territories and create a legitimate political representation. This time, support from the international community should extend further than just the holding of elections.

The reconciliation process needs a general framework: freedom of movement must be guaranteed between the West Bank and Gaza, security forces and administrative bodies must be united, and civil society must be integrated. One eventual goal is the accession of Hamas to the PLO, which is recognised as the legitimate representation of all Palestinians.

The risk of failure is great, but this could be the last chance for intra-Palestinian reconciliation. Europe should support this process. After all, as long as the Palestinians and their territory remained divided, there can be no prospect of peace.

The 40-year-old historian and Middle East expert René Wildangel heads the regional Palestinian office of the Heinrich Böll Foundation, which maintains close links with the German Green Party, in Ramallah.

As Pride Month draws to a close, Richard Marcus delves into Saqi Books’ latest publication, "This Arab is Queer". Edited by Elias Jahshan, this anthology of essays is remarkable ... END_OF_DOCUMENT_TOKEN_TO_BE_REPLACED

A new exhibition, "Syria – Against Forgetting", at Cologne’s Rautenstrauch-Joest-Museum focuses on Syria's artistic and cultural heritage and pays tribute to the country before ... END_OF_DOCUMENT_TOKEN_TO_BE_REPLACED

With regard to gender justice, things look bleak in the Arab world. Laws typically discriminate against women, while national legislation all too often does not comply with the ... END_OF_DOCUMENT_TOKEN_TO_BE_REPLACED

This year’s Morgenland Festival opened with the premiere of Kinan Azmeh’s musical theatre piece, “Songs for Days to Come”, based on fifteen poems by contemporary Syrian poets. ... END_OF_DOCUMENT_TOKEN_TO_BE_REPLACED

Women in the Levant have long used needlework to depict the region’s history, its landscapes, customs and traditions. Intricately embroidered panels, varying in style, colour and ... END_OF_DOCUMENT_TOKEN_TO_BE_REPLACED

END_OF_DOCUMENT_TOKEN_TO_BE_REPLACED
Social media
and networks
Subscribe to our
newsletter