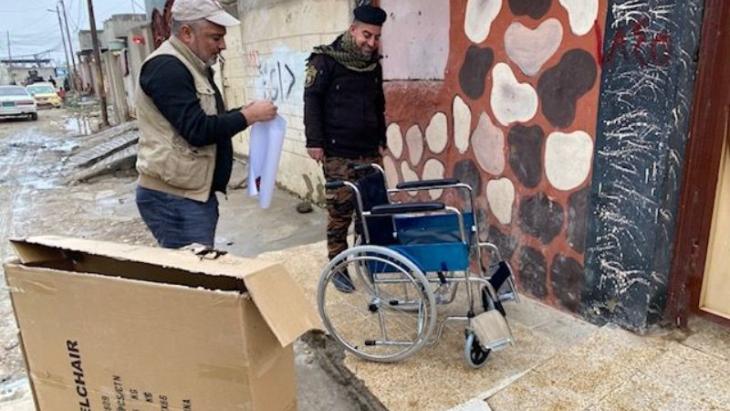 Reconstruction and humanitarian aid in northern Iraq
100 wheelchairs for Mosul

Two and a half years since its liberation from the Islamic State group, large areas of Mosul still lie in rubble. Germany is contributing in a variety of ways to the reconstruction of the city in northern Iraq. Brigit Svensson reports from Iraq

"The first thing I want to do is to build bridges, as they were almost all destroyed." Najim Abdullah al-Jubouri, the new Governor of the Province of Nineveh in northern Iraq with its capital city of Mosul, has only been in office for four weeks. The 63-year-old Iraqi Army Major General played a crucial role in the liberation of Iraq’s then second largest city from the clutches of IS. Now, he is in charge of a Herculean task – organising the reconstruction of this completely destroyed city.

"There has been massive destruction in Mosul as a result of the fight against IS and the city urgently requires reconstruction." Jubouri reveals that there are currently around one million people living in the city. There used to be over two million. Many former residents still live in camps or in the Kurdish areas. "Yet, the Iraqi government has left us without resources," the Governor adds resignedly. Baghdad has only provided around one hundred million U.S. dollars for the whole province of Nineveh. "That is nothing," says Al-Jubouri.

Abandoned by the central government

In the months since Mosul was freed from the Islamic State group, Faris Naeem al-Janaby has restored and renovated – or patched up, as he says – a total of 1507 houses. The necessary funding did not come from Baghdad, but from Germany. Faris sounds somewhat resigned when he says that he only has around 3300 US dollars available per house. "That is not much, considering the extent of the destruction."

He has often had to face the disappointment of city dwellers when informing them that he could only rebuild one or two of their rooms. Sometimes he could literally only manage the roof over their heads, which had been destroyed during the air strikes on the city. Other times it was their entrance hall, destroyed by a car bomb. Still, Faris' aim is to help as many people as possible. 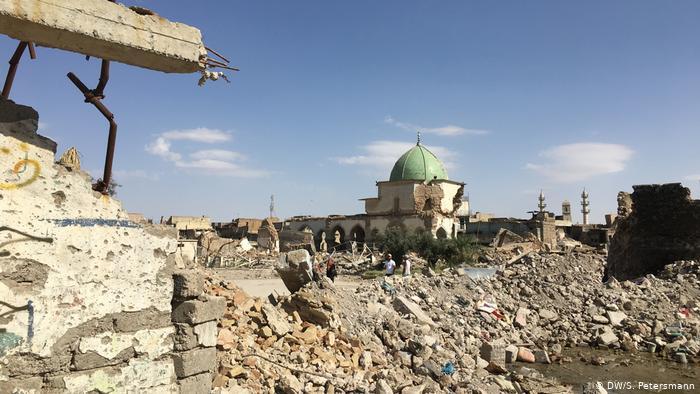 Mere traces of the past: Mosul's Al-Nuri mosque stands in ruins. Huge swathes of the Old City of Mosul – where fighting against IS was at its fiercest – are still uninhabitable. Entire buildings were reduced to piles of rubble

The Iraqi civil engineer from Baghdad turns melancholic when he describes the suffering and desperation of the people he encounters. "It is still possible to live in the eastern section of Mosul," he claims. "Only 20 percent of the houses there were destroyed." But in the west of the city, where IS forces were under siege in the Old City for many weeks and where fierce fighting took place, the destruction was over 80 percent.

In a recent article published by the American professional journal PLOS Medicine, one reads that 130,000 houses were destroyed in Mosul and some 90,000 people were killed. The extent of this destruction can still be seen today, some two-and-a-half years after the liberation of the city from the jihadists. While life has slowly been returning in the east of the city, with businesses, restaurants, and the university back in operation and people returning to their houses, the western part of Mosul still resembles little more than a pile of rubble.

Any reconciliation between Turkey and Syria’s Assad regime would have disastrous consequences for many Syrians, explains Syria expert Kristin Helberg END_OF_DOCUMENT_TOKEN_TO_BE_REPLACED

Iraq bears the scars of decades of conflict and has seen its antiquities plundered, yet the House of Manuscripts' collection has managed to survive END_OF_DOCUMENT_TOKEN_TO_BE_REPLACED

As Syrian camps housing families of Islamic State fighters get more dangerous, there are calls to bring children out, even if the mothers don't want to go. The idea of separating ... END_OF_DOCUMENT_TOKEN_TO_BE_REPLACED

Morocco has taken the 2022 World Cup by storm, with the northwest Africans reaching the semi-finals for the first time in their soccer history. As the knockout match approaches, ... END_OF_DOCUMENT_TOKEN_TO_BE_REPLACED

The Islamic Republic has been unable to quell the civil unrest that erupted three months ago, after Mahsa Amini died after being detained for violating hijab rules. Now the ... END_OF_DOCUMENT_TOKEN_TO_BE_REPLACED

The Kurds are under attack from two sides: from Turkey, and from Iran. The situation in their territories in northern Iraq is becoming increasingly desperate. Birgit Svensson ... END_OF_DOCUMENT_TOKEN_TO_BE_REPLACED
Author:
Birgit Svensson
Date:
Mail:
Send via mail

END_OF_DOCUMENT_TOKEN_TO_BE_REPLACED
Social media
and networks
Subscribe to our
newsletter