The Marota project was actually one of several re-organisation schemes that the regime has devised over the past few years for the Damascus area. The Assad regime is attempting to impose demographic change in Greater Damascus by preventing the old communities that used to live in the devastated areas from ever returning to their old neighbourhoods, in retaliation for "their rebelliousness".

Land appropriation has been made easy under the pre-text of land re-zoning and the implementation of new urban plans. However, having excluded potential domestic investors, the actual implementation of these schemes has become completely dependent on the availability of international funding.

Yet international investors now have an additional reason not to invest in Syria: they have no desire to be involved in illegal activities that aim to defraud refugees of their property and thus prevent them from returning to their original and – if the planners have their way – no longer existent homes.

Today, any investment in the state-run Syrian reconstruction effort is akin to partaking in a crime; never mind the fact that it also enables the restoration of a brutal regime by helping to revitalise its corrupt and oppressive institutions, so weakened and depleted over the last eight years. The debacle of Syriaʹs reconstruction shares many similarities with that of Iraq. In the absence of political agreement, any reconstruction sponsored by the state that masquerades as a social contract is doomed to failure.

Such a model creates huge opportunities for the growth of corruption, the weakening of local communities and a deepening of the divisions between them. It also compounds feelings of resentment among the groups that have not been able to benefit from the reconstruction projects, thus preventing the achievement of a solid social peace and sustainable economic stability.

The alternative model may be to launch reconstruction operations that deal directly at a local level, financing local projects while training and employing local labour. Central government could oversee a national reconstruction plan; however the implementation must be the responsibility of local government. 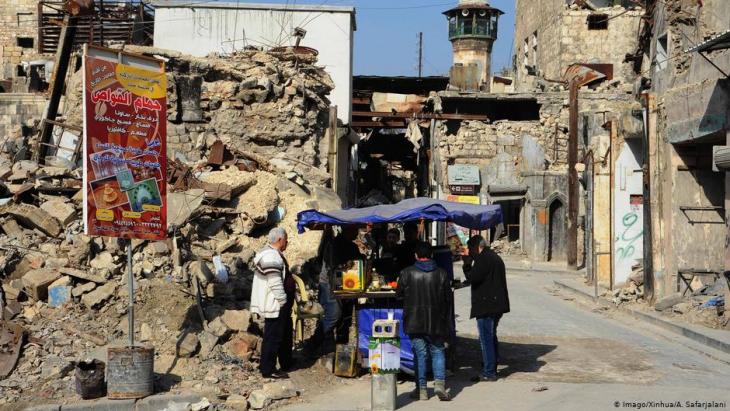 Funding-dependent urban plans a non-starter: overseas investors have no desire to be involved in illegal activities that aim to defraud refugees of their property and thus prevent them from returning to their original and – if the planners have their way – no longer existent homes

Normalising relations with the Syrian regime

Both Russia and Iran are now pushing for reconstruction in Syria, with an eye to reducing the financial burden of their military and political intervention, while increasing their ability to convert their military successes into sustainable economic achievements and profitable political hegemony. Neither Iran nor Russia has the financial capacity, however, to launch a reconstruction.

Iran certainly does not have the capacity to launch real reconstruction projects aimed at rebuilding entire devastated towns and neighbourhoods, especially after the tightening of U.S. sanctions against its oil exports. It is worth mentioning here that Iran, as part of its political adventures in the region, is preparing to build a southern suburb in Damascus where it will house the members of its multinational militias – always assuming, that is, that they are granted Syrian citizenship.

Russia is currently working actively together with a few Arab countries willing to participate in the reconstruction in Syria for the purpose of re-normalising relations with Assad. In co-operating with Damascus, some of these countries see an opportunity to create a counter-revolutionary front, build further capabilities to control their own populations and gather winning political cards for in the regional tug-of-war by participating in any political effort to resolve the conflict in Syria.

The Saudi national team is set to play the German Olympic squad at the Olympics in Tokyo later this month – a chance for the outsiders to make their mark. At the same time, and ... END_OF_DOCUMENT_TOKEN_TO_BE_REPLACED

As the Biden administration attempts to promote democracy and human rights in the Middle East, it will confront the deep-seated belief among Arabs that U.S. policies are unfair to ... END_OF_DOCUMENT_TOKEN_TO_BE_REPLACED

While Europe and North America experience something like a return to normality with relatively high vaccination provision and take-up rates, the rest of the world is struggling to ... END_OF_DOCUMENT_TOKEN_TO_BE_REPLACED

Philosopher Juergen Habermas was due to be awarded a major Arab prize in Abu Dhabi, but has turned it down following criticism. This decision torpedoes Arab efforts at a ... END_OF_DOCUMENT_TOKEN_TO_BE_REPLACED

END_OF_DOCUMENT_TOKEN_TO_BE_REPLACED
Social media
and networks
Subscribe to our
newsletter