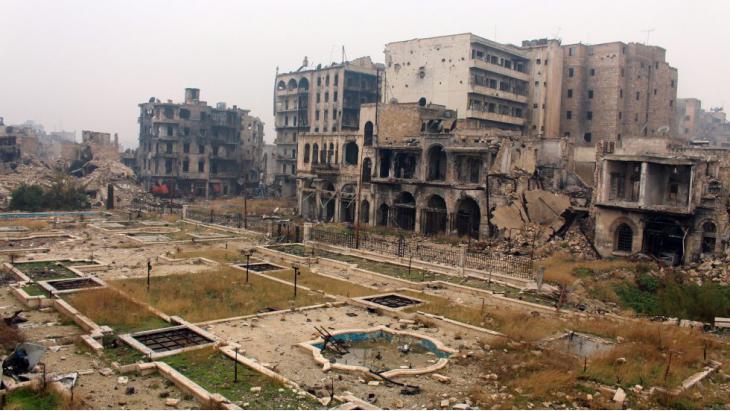 Reconstruction in Syria
The next battleground

The Syrian regime is turning to reconstruction to boost legitimacy and consolidate control, a process that also benefits its external allies. By Bernedetta Berti

In the bloody and protracted Syrian conflict, the humanitarian space has been heavily constrained. Different warring parties grant or withhold humanitarian access to advance their military strategies and political objectives.

The Syrian regime has relied on the distribution of international aid to reward loyalty, punish dissent, further civilian dependency on it and undermine the creation of alternative political orders. Similarly, war-driven logic now appears to be playing a prominent role in the discussions on how to begin rebuilding the country, with the regime relying on reconstruction to boost legitimacy and consolidate control.

Reconstruction will constitute an enormous task; over the past six years Syria has suffered cumulative GDP losses around $226 billion, seen half of its population displaced by conflict and witnessed substantial damage to its civilian infrastructure. A 2017 World Bank report estimates that up to 27 percent of houses in the assessed urban centres have been either destroyed or damaged and total reconstruction costs are estimated between $200 and $350 billion.

But reconstruction is also an opportunity to reconfigure the urban landscape of Syria′s most important cities and, in doing so, to reshape or consolidate political and power dynamics. Rehabilitating houses, services and infrastructure is a highly political process that offers domestic actors and external powers a chance to increase their leverage and influence and shape the future of Syria. 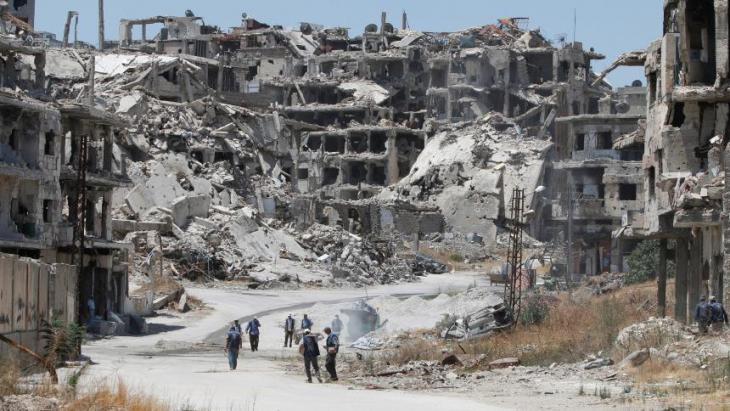 Homs in ruins: after six years of Assad′s civil war, little remains of Syria′s economy or infrastructure. The World Bank and the International Monetary Fund (IMF) estimate that it will cost up to 200 billion dollars to rebuild the country – a bill that Syria will never be able to foot on its own. How much financial support Moscow and Tehran are prepared to offer remains to be seen

In the case of Syria, key questions related to reconstruction pertain to which cities or neighbourhoods are prioritised in the rebuilding process: how and for whom they are rebuilt and who gets to decide and implement the renewal projects. These issues are important in all post-conflict reconstruction processes, but they are especially relevant in the Syrian context, where rebuilding has begun separately from a national process of political settlement or societal reconciliation.

A risk of instrumentalisation

Conventional wisdom on post-conflict recovery and reconstruction postulates that physical rebuilding, economic recovery, political reforms and societal reconciliation should all proceed in tandem to shift a country from war to peace. But, in Syria , there is a risk that the bulk of the reconstruction and economic recovery will continue to proceed in isolation from negotiations to end hostilities.

Under these circumstances, reconstruction can easily become a tool to consolidate war gains and existing power dynamics, preventing or complicating – rather than supporting – a war-to-peace transition.

Recent efforts to rehabilitate Assad are setting a damaging precedent for accountability, just as the international community is expressing the need to hold Russia to account for ... END_OF_DOCUMENT_TOKEN_TO_BE_REPLACED

The Kurds are under attack from two sides: from Turkey, and from Iran. The situation in their territories in northern Iraq is becoming increasingly desperate. Birgit Svensson ... END_OF_DOCUMENT_TOKEN_TO_BE_REPLACED

More than 300 children in rebel-held northwest Syria kicked off their own football World Cup on Saturday, with organisers hoping to shine a light on communities battered by 11 ... END_OF_DOCUMENT_TOKEN_TO_BE_REPLACED

Lamya Kaddor, MP for Germany’s Green Party, visited Qatar with a group of parliamentarians. In interview with Claudia Mende, she advocates a differentiated picture and urges that ... END_OF_DOCUMENT_TOKEN_TO_BE_REPLACED

Arabs in the German capital? For many, this means criminal clans. Yet the city is home to a vibrant intellectual scene. Exiles from Syria, Palestine and Egypt are gathering to ... END_OF_DOCUMENT_TOKEN_TO_BE_REPLACED

After a two-year hiatus, the Arab League re-convened at the beginning of November in Algiers against a backdrop of uncertainty and discord. By Pierre Boussel END_OF_DOCUMENT_TOKEN_TO_BE_REPLACED
Author:
Benedetta Berti
Date:
Mail:
Send via mail

END_OF_DOCUMENT_TOKEN_TO_BE_REPLACED
Social media
and networks
Subscribe to our
newsletter