What is more, in instances like Basateen al-Razi in the Damascus area or the Jouret al-Shayah neighbourhood in Homs, the areas at the centre of re-development projects are also former opposition strongholds, adding to the fears that dramatically reconfiguring these areas could serve as a power consolidation and population control tool, with significant impact on the civilian population and especially on the 6.3 million IDPs nationwide.

In these cases, reconstruction risks heightening, rather than lessening, societal conflict, while increasing the vulnerability of segments of the population that are already at risk. In other words, reconstruction policies have a concrete political impact, as well as the potential to create or consolidate forms of marginalisation within Syria. As such, they are also a significant protection issue.

This is why the Syrian government has repeatedly stated that China, India, Iran and Russia are welcome to play a role in rebuilding Syria, as they are perceived as less likely to condition aid on political reforms, as the European Union has suggested. The more the Syrian government is able to rely on these key allies, particularly Iran and Russia, the more it will be able to move forward with a reconstruction process that is divorced from issues pertaining to political transition and reform. 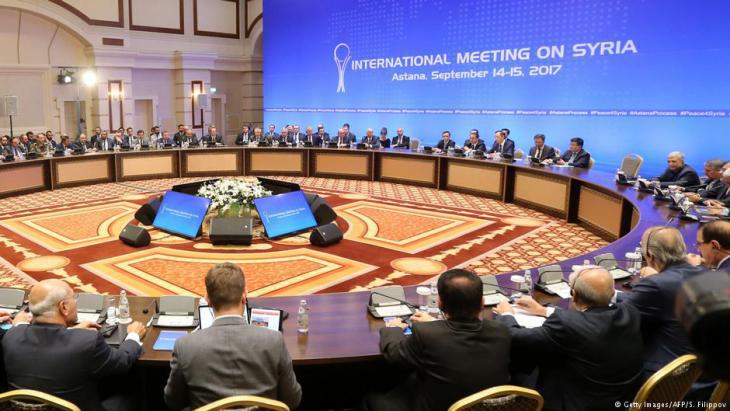 "If the physical rebuilding of the country′s infrastructure continues to occur separately from talks to reach a political settlement and to repair Syria′s devastated social fabric, it will negatively impact already vulnerable sectors within Syrian society and further delay any discussion on how to move beyond war and conflict," warns Benedetta Berti

The relation between reconstruction, governance and power is not lost on any of the external actors in Syria. Even as they negotiate de-escalation and ceasefire arrangements, external powers will likely also seek to cement spheres of influence in Syria through reconstruction.

For example, Turkey is investing in rebuilding war-damaged infrastructure in al-Bab, outside of Aleppo and has even announced it plans to build an entirely new suburb nearby. While Turkey hopes this will drive out extremist groups and encourage many of the refugees it is hosting across the border in Gaziantep to return to Syria, these efforts are as much about present-day stabilisation as about establishing future political influence.

In turn, as reconstruction moves forward, former Assad opponents like the United States and the EU will face a dilemma between investing in “technical” reconstruction – relinquishing any semblance of putting conditions on aid and de facto rewarding the regime and its consolidation of power on the ground – or refusing to participate in the reconstruction process all together, risking losing even more influence.

The international development sector as a whole faces the same predicament when thinking about how to operate in the complex Syrian context. Indeed, while the need for reconstruction and recovery is undeniable, the ongoing violence and militarisation mean the Syrian government can continue to use reconstruction to consolidate control and solidify wartime alliances.

Yet if the physical rebuilding of the country′s infrastructure continues to occur separately from talks to reach a political settlement and to repair Syria′s devastated social fabric, it will negatively impact already vulnerable sectors within Syrian society and further delay any discussion on how to move beyond war and conflict.

Benedetta Berti is a Robert A. Fox Senior Fellow at the Foreign Policy Research Institute (FPRI) and a TED Senior Fellow.

Very different Western reactions to the suffering in Ukraine and the Arab world show that there is a profound rift among cultures. Essay by Michael Young END_OF_DOCUMENT_TOKEN_TO_BE_REPLACED

United Arab Emirates strongman Sheikh Mohammed bin Zayed al-Nahyan, who was formally elected president on 14 May, has led a realignment of the Middle East, creating a new anti- ... END_OF_DOCUMENT_TOKEN_TO_BE_REPLACED

Middle Eastern countries are still on the fence when it comes to the Russian invasion of Ukraine. Their citizens point to the West's double standards surrounding conflict and ... END_OF_DOCUMENT_TOKEN_TO_BE_REPLACED

For over fifty years, British photographer Peter Sanders travelled across the Middle East and further afield, seeking out the saints of Islam. His work uncovers a little-known ... END_OF_DOCUMENT_TOKEN_TO_BE_REPLACED

END_OF_DOCUMENT_TOKEN_TO_BE_REPLACED
Social media
and networks
Subscribe to our
newsletter