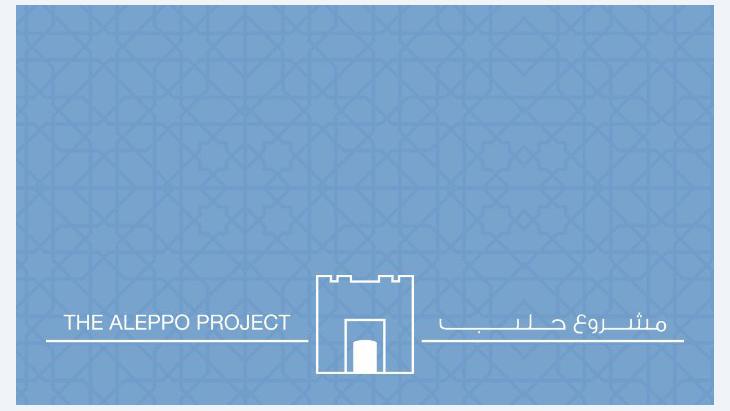 Reconstruction of Aleppo
″Others destroy and we rebuild″

The battle-torn city of Aleppo lies in ruins. Nonetheless, former residents of the city and experts located in Budapest are already working towards the reconstruction of the 5000 year old metropolis. By Iris Mostegel

Bombs are raining down on Aleppo, while snow falls over Budapest. Some 1947 kilometres separate the two cities. A pale blue website - thealeppoproject.com -  links the two with an apparently unimaginable question: if the war ended tomorrow, how should Aleppo be rebuilt? "The sooner we start thinking about it, the better it will eventually be for the city. We need finished concepts when the time comes," says the exiled Aleppo native AlHakam Shaar from the Center for Conflict, Negotiation and Recovery (CCNR) at the Central European University in Budapest.

The 29-year-old is one of the four initiators of this pale blue web site – the culmination of a multidisciplinary project that emphasises input by the citizens of Aleppo, especially refugees from the city. They are encouraged to convey their desires for and visions of the reconstruction of their native city. They can take part in surveys by urban planners, send in comments and post pictures to be pinned-up on an interactive city map.

The project was begun three months ago and is only just in its initial stages, yet a number of trends can already be seen. "Just as the citizens of Aleppo know what they want, they likewise know what they do not want. For example, there are a number of buildings belonging to the Syrian intelligence service that were destroyed by the war. No one wants these to be rebuilt under any circumstances. These buildings are symbols of horror and torture," says Shaar, citing one of the 1001 questionnaires already submitted by the people of Aleppo. "By contrast, the reconstruction of historically significant cultural landmarks such as the Umayyad Mosque and the Citadel are very important for the respondents. For many, it is a matter of identity." 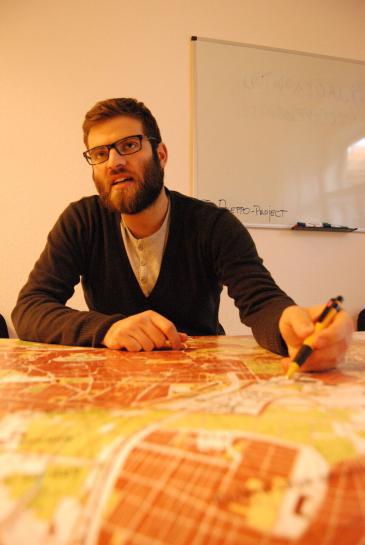 Approximately one million people – half of the city′s population – has fled the war zone that Aleppo has become. Twenty-nine year-old AlHakam Shaar is one of them. "The earlier we start thinking about reconstruction the better, " he says

In addition to Shaar, the 26-year-old Armenak Tokmajyan, who fled from Aleppo in 2012, is one of the two Aleppo natives on the project, which was initiated by the New Zealander Robert Templer, a specialist on conflict issues and Director of the CCNR at the Central European University. Currently, the red-bearded New Zealander sits next to the brown-bearded Shaar and their American colleague Meghan Moor in office number 206 at their institute in Budapest. There are piles of paper on the desk, a pair of ties thrown over the coat rack and a map rolled up in the corner. This is the headquarters of the Aleppo Project, the place where hopeful visions for Aleppo's future converge, as well as being a repository for documentation on the past and present of the city.

The goal is to create a comprehensive data bank that can someday serve as the basis for reconstruction. Templer is convinced that this can only succeed with the participation of Syrians themselves. The New Zealand expert in conflict resolution has studied the history of other cities destroyed by war and has come to the conclusion that the success or failure of reconstruction is directly dependant on the extent to which the population of the city is involved in the process. "If you take a look at the failed examples, you can detect a common factor: in every city where residents were not consulted or permitted to participate, things have gone wrong, be it Beirut or Sarajevo, not to mention Kabul."

Yet, citizen participation is not enough. Experts are also required to address a multitude of questions: How can the city be built in order to help stifle ethnic and religious tensions? How should priorities be set to determine what to build first? Who should remove the rubble of the destroyed buildings and where should this be stored? What should be done when unexploded ammunition or toxic waste is found in the rubble? When a war is finally over, dozens of such questions arise all at once. This is why the group in Budapest, parallel to its survey activities with the residents of Aleppo, has already begun developing the necessary technical support by setting up a network of urban planners, architects, students of political science and conflict management experts.

The basic principle is one of open collaboration, where everyone from professors to refugees is welcome to help with their knowledge. And every Syrian wanting to contribute to the reconstruction of Aleppo will be able to access the collected data via the pale blue website (thealeppoproject.com). "There is no guarantee, however, that our data base will actually be used," says Templer, who doesn't appear to be particularly happy about this prospect. 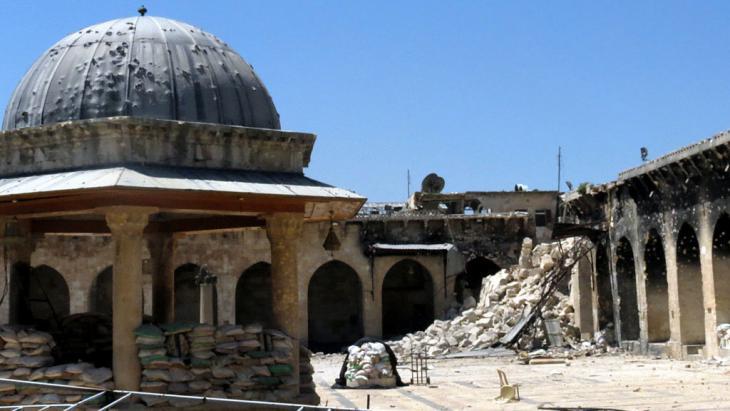 A city in ruins: according to UN estimates, some 60 percent of historical downtown Aleppo has been destroyed, including the Umayyad Mosque and parts of the ancient bazaar

At present, there is no trace of any actual reconstruction. Fierce fighting is still going on in and around the former economic centre of Syria. The bloody frontline between government troops and rebels lies right through the middle of the city. According to UN estimates, up to 60% of the historic centre and world heritage sites have been destroyed. And the black flags of the IS are flying only 15 kilometres away.

Despite all the optimism, perhaps the reconstruction projects are somewhat premature. Yet, an astonishing number of people believe otherwise. Independent of the Budapest project, an increasing number of initiatives have been preparing for the "zero hour" after the war has ended. Those busily drawing up plans for the future include a UN-sponsored project in Beirut called the National Agenda for the Future of Syria, the Berlin-based German-Syrian archaeologist Mamoun Fansa, the German Archaeological Institute (DAI) and the Brandenburg University of Technology Cottbus. The goals of each project may be different, but the approach is the same – be ready when the time comes.

This will be a difficult undertaking in Syria. In addition to the reconstruction of buildings, Aleppo society, which has been torn apart by civil war, will also need to be rebuilt. The team in Budapest is aware of the challenges posed by this balancing act and hopes to influence civic renewal through reconstruction efforts. An essential factor will be the intentional interaction of the city's different communities. One solution envisages the co-operation of various neighbourhoods in common reconstruction projects. Another sees the construction of sites in which people naturally interact with each other.

"Take the example of Baghdad," says Templer. "The Iraqi capital is divided into ethnic enclaves that are separated from one another by high cement walls. When peoples live in total physical isolation from each other, it becomes incredibly easy to imagine the other group in the worst possible ways." In the case of Aleppo, therefore, the solution would be to reconstruct all places where the various communities came together, such as the historic bazaar, which was destroyed in 2012. This is where "people, regardless of their origin, ethnicity, religion, or world views, came to buy their vegetables or spend a fortune on gold jewellery. Places like this have a healing effect on divided societies."

The 13-year-old Mohammed Qutaish, a schoolboy from Aleppo, also dreams about the healing of his country. In all likelihood, he knows nothing of the reconstruction project in Budapest or of the other initiatives for his native city. Last year, he thought about the future of his city and subsequently built a huge model city of the future Aleppo out of paper and cardboard in his father's atelier. Interviewed by a TV team from Channel 4, he said he wanted to become an architect. "Someday, these buildings out of cardboard will become a reality." The camera zooms to a small piece of paper that the 13-year-old had glued to the wall. It says, "The others destroy, we rebuild."

Only a three hour flight away from Mohammed sits the red-bearded Templer in Budapest and says something quite similar. "Over the many thousands of years of its history, Aleppo has been destroyed numerous times. Yet, every time it was rebuilt. So far, the city has always returned."

Arab youth express their hopes and wishes for the New Year, spanning everything from civil and political rights, to education, to arts and culture. By Rafiah Al Talei END_OF_DOCUMENT_TOKEN_TO_BE_REPLACED

Life imprisonment for crimes against humanity: that was the sentence handed down to Anwar Raslan in the world's first trial of a member of the Syrian torture system. Matthias von ... END_OF_DOCUMENT_TOKEN_TO_BE_REPLACED

Moncef Marzouki was Tunisia's first democratically elected president after the fall of dictator Ben Ali. Today he is the most prominent critic of increasingly counter- ... END_OF_DOCUMENT_TOKEN_TO_BE_REPLACED

Historically Iraq's Yazidi community was isolated, under-resourced and very conservative. Seven years after the "Islamic State" tragedy, the community is more open to the world – ... END_OF_DOCUMENT_TOKEN_TO_BE_REPLACED

In this new bilingual edition, translated by Humphrey Davies, al-Jawbari, one of the thirteenth century's leading experts in skullduggery reveals all there is to know about the ... END_OF_DOCUMENT_TOKEN_TO_BE_REPLACED
Author:
Iris Mostegel
Date:
Mail:
Send via mail

END_OF_DOCUMENT_TOKEN_TO_BE_REPLACED
Social media
and networks
Subscribe to our
newsletter