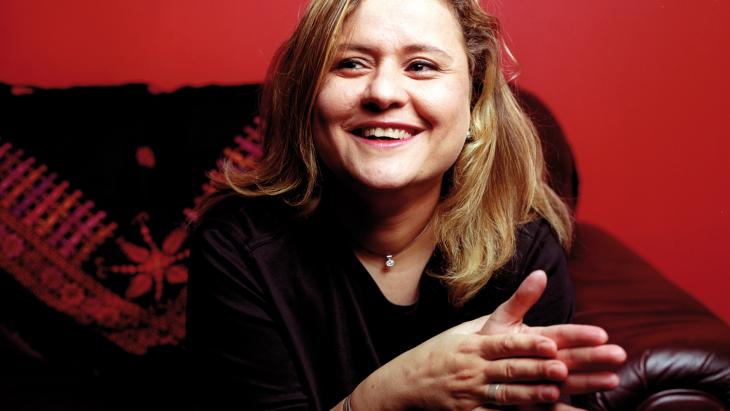 Following her widely acclaimed featured performance on Gilad Atzmon's "Exile", the British-Palestinian singer Reem Kelani has released her own debut album, establishing herself as important artist in the Palestinian musical tradition. By Lewis Gropp

Music reviewers have a battery of established categories at hand with which to assess the artistic value of a piece of music. Expression, technical ability, innovation, authenticity, musical or artistic integrity, the atmosphere or mood the piece creates, and so on. But the limitations of such categories become obvious when they are applied to assessing Reem Kelani's first album, and its hidden depths are likely, ice-berg-like, to prove elusive to the application of such criteria.

Musical riches of the Holy Land

There is, however, a danger inherent in upholding or preserving a particular (musical) tradition. For in accentuating the differences between your own and other traditions you run a strong risk of creating a superficial, one-dimensional version of your own tradition. It's a trap that Reem Kelani manages to steer well clear of, however, and in "Sprinting Gazelle" she succeeds admirably in bringing together the richly diverse facets of the musical traditions of historical Palestine into a near 75 minute recording.

The tone is set with the opening of the first track on the album, "As Nazarene Women Crossed the Meadow", which begins with the sound of a monotonal male-voice choir reminiscent of the liturgical chanting used in the Greek Orthodox Church. The idea for this arrangement came from Kelani’s recollections of a childhood summer visit to the Greek Orthodox Church of St. Gabriel in Nazareth.

"I was mesmerised by the Eastern Christian chanting that I heard, which had such striking similarities with Muslim religious chanting," the singer writes in the wonderfully informative booklet which accompanies the album and provides fascinating insights into the songs and their origins. Along with Reem Kelani's arrangements of traditional songs, around half of the songs on the album are self-penned compositions. And although each of the songs has its own distinctive and distinguishing character, the album is nevertheless an integrated marriage of contrasts, a multi-faceted, unified work of art.

So, for example, the gentle, lilting melody of "Galilean Lullaby" with its floating piano and brushed drum accompaniment and its hint of jazz ballad (in Oriental guise) is followed by the pulsing percussion of "Baker’s Dozen". Beginning with a strong percussive beat (in audacious thirteen-four time), the hypnotic bass line in a minor key is followed by a wistful violin melody, which vies with the insistent rhythmic motif of the bass clarinet. The addition of clapping hands then evokes an image of cultic ritual. Appropriately, this rendition of the song is entitled Habl el-Ghiwa, or "Pull of Seduction".

Reem Kelani's remarkable performing talents have featured in countless reviews and articles, and anyone lucky enough to have seen her live can testify to the power and intensity of a voice that holds an audience spellbound, electrified, to the very last row of the auditorium. Kelani's debut album proves not only that she has the ability, as producer and arranger, to successfully bring her ideas to fruition, but also that she is well able to maintain her artistic independence. No label manager has been permitted to compromise her ideas, nor any slick PR man to talk her round to a more commercial marketing strategy.

The grand finale to "Sprinting Gazelle" is provided by Il-Hamdillah (Giving Praise), a traditional Palestinian song whose title is repeated mantra-style by a ten-person choir. This, too, has immense suggestive power and (as the booklet informs us) is often sung in this form at Sufi Zikr devotional rituals where monks evoke events from the past. Like the entire album, it is a captivating piece with a clarity and transparency that is only matched by the emotional depth and warmth that emanates from the music. British Guitarist Andy Summers once said that he believed that music had to breathe.

And that is exactly what it does do on "Sprinting Gazelle". More than that, Reem Kelani succeeds in preserving the musical culture of Palestine without creating any feeling that the songs are museum pieces. On the contrary, she manages to breathe new life and vitality into texts and melodies that are sometimes centuries old. On "Sprinting Gazelle", as Roger van Schaick has so aptly commented, "She doesn’t sing the music, but lives it with her whole body and soul."