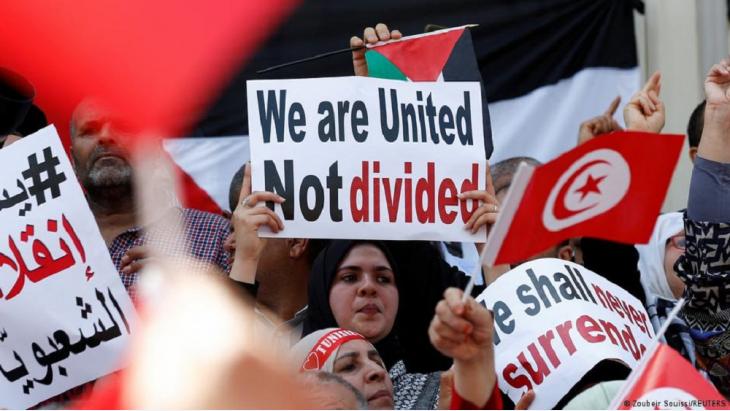 Tunisians are set to vote on a new constitution on 25 July. The prominent lawyer and women's rights activist Yosra Frawes fears the referendum could facilitate a return to dictatorship. This would also endanger progress on women's rights achieved since 2011. Interview by Claudia Mende for qantara.de

Ms Frawes, what's your assessment of the situation ahead of the 25 July referendum?

Yosra Frawes: The situation is very worrying for all Tunisians who hoped for political, economic and social change in their country and who have gradually realised that since 25 July 2021, politics has no longer been working towards the fulfilment of those expectations. The new constitution is dangerous because it presents the possibility of a return to dictatorship.

The 2014 constitution anchored a broad spectrum of liberal civil rights as well guarantees for their observance. Now that's all under threat because the new constitution was compiled unilaterally by the president. The process may have given the impression that a national dialogue was taking place, but that was misleading. Also, the changes he presented on 8 July were developed without consultation and do not address criticisms of his initial draft.

What is it that makes the new constitution dangerous, exactly?

Frawes: Of particular concern is, for example, a passage in Article 5, which says the state is required to "achieve the purposes of Islam" (Makassed). This could be interpreted as meaning that universal civil rights and liberties – including women's rights – have to be restricted.

This section of the constitution would make it possible to reappraise laws and rewrite them according to the new stipulations. In addition, the new constitution opens the door to a return to the situation pre-2011, to a presidential system. The institutions – first and foremost parliament and the judiciary – would be weakened and the president elevated to the status of a supreme national power who is no longer answerable to the electorate; he would be above any form of accountability. He would be solely responsible for appointments to the constitutional court, for example. Democratic institutions would be hollowed out from the inside. This new constitution would no longer comply with international standards concerning the rule of law.

The draft paves the way for an Islamisation of society and the Tunisian state; it would be a regressive step to a time before all the achievements made by the Tunisian people since independence. And it would also open the door to a new dictatorship. 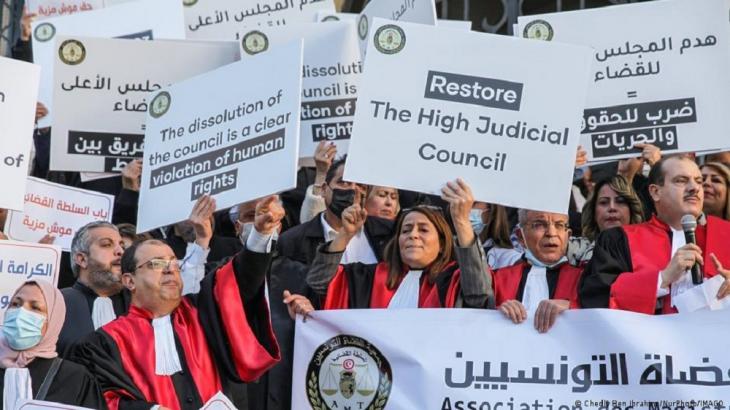 End of the process of democratisation in the birthplace of the Arab Spring: almost unnoticed by the rest of the world, Tunisian President Kaïs Saïed has been increasing his own power and hollowing out the institutions of democracy established over the past 11 years since his power grab in the summer of 2021. On 25 July, Tunisians will be asked to vote on a new constitution which, according to Yosra Frawes, would be dangerous if accepted "because it presents the possibility of a return to dictatorship"

Tunisia is currently in a state of economic and social fragility  – a situation exacerbated by rising food prices, high unemployment and the threat of national bankruptcy. What impact is this having on women?

Frawes: Women are more severely affected by the crisis than men; unemployment and illiteracy rates are higher among women; in some areas of Tunisia, up to 40 per cent of women can't read or write.

If women want to start their own business, it's harder for them to secure bank loans. Many women live in a highly precarious state. They don't have regular work contracts, their working conditions are dangerous – particularly  in rural areas – and they have no social security whatsoever.  They earn significantly less than their male counterparts, whether in public service, private business or the informal economy. A female farm worker earns 10 dinars a day (around 10 euros), while a man earns 15. That's blatant inequality.

Women also have much less access to land and property rights, in fact just 14 per cent of agricultural land is owned by women – which means it's still largely a male privilege and spells poverty for many women, in some cases extreme poverty. The poverty rate has risen further in the current crisis. Studies predict that around half of the Tunisian population will soon be living in poverty. And that poverty is primarily female.

Did the women's movement do too little for these socially disadvantaged women?

Frawes: To a certain extent yes, unfortunately. Women's movements in Tunisia and the Maghreb have focused on effecting changes to the judicial system. Urgent social questions, for example concerning the safety of female farm workers on their way to work in the fields, are easily overlooked. Too often, we limit ourselves to demanding laws, but then not checking how these laws are being applied in practice. Also, we've not managed to forge links between female activists and farm workers, for example, in a bid to achieve more together.

There have been some fundamental attainments for women since 2011, for example with the inclusion of the principle of gender equality in the constitution of 2014 or the right of a woman to pass her nationality on to her children since 2015 ...

Frawes: The statutory improvements achieved since 2011 can be compared with the ground-breaking legal reforms introduced after independence in 1956. Also of key importance were Law No. 58, which was passed in 2017, on the protection of women and girls against violence and the Law on gender-responsive budgeting. Within a very short space of time, many pro-female laws were passed in a process that would normally have taken 20 to 30 years. But it will take time for the new laws to be implemented in practice, to permeate societal value systems and also to be firmly anchored in government spending and political provisions. That being said, there haven't been any further laws passed to improve the lot of women since 2019, because the current president, Kaïs Saïed, is doing nothing for women and is instead thwarting our efforts.

How is the implementation of the laws looking on a practical level?

Frawes: It's still too early for a thorough appraisal. But we see that there is no political will to implement these laws. For example, the Law No. 58 on the protection of women against sexual, physical and psychological violence – which is ground-breaking for the Arab world – sets out clear rules for its implementation, such as state support for victims to enable them to bring the perpetrators to court.

To this end, the law stipulates the creation of an assistance fund. It does not, however, set out any concrete deadlines or sums. So at the moment, the success of this law depends more on a change in the societal mindset. The widely-held view that women themselves are to blame if they become victims of violence and the shame associated with that, is changing.  It has become clear that it is the responsibility of the state and society as a whole to fight violence against women.

Together against authoritarian tendencies

What is your relationship like with the women of the Ennahda Party? After the toppling of Ben Ali, relations between secular women's organisations and activists from the Islamic spectrum were still charged with conflicts.

Frawes: At the start of the Revolution in 2011, the women of Ennahda were very critical of secular women's organisations because they said we didn't do enough for them when they were being tortured and detained under Ben Ali. But their criticism conceals an historic fact: we were all in the same boat; we were also persecuted and harassed, even if women from the spectrum of political Islam were harder hit than we were. But afterwards, we learned to talk to each other.

The fact that we organised a meeting for all candidates of the Constituent National Assembly in 2011 broke new ground. To get to know each other personally, to listen to each other – although we sometimes yelled at each other – was a first step on the road to saying that we women have something in common, we are all suffering under the patriarchy, in all parties. 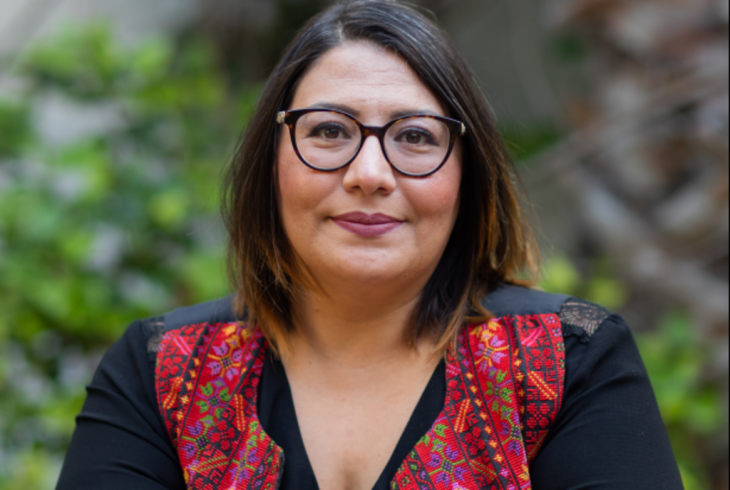 Lawyer and women's rights activist Yosra Frawes fears what approval of the draft referendum would bring: "Of particular concern is, for example, a passage in Article 5, which says the state is required to 'achieve the purposes of Islam' (Makassed). This could be interpreted as meaning that universal civil rights and liberties – including women's rights – have to be restricted," she says

How did things progress after that?

Frawes: After that, the Ennahda women were initially caught up in matters of party discipline. When it came to the 2014 constitution, Ennahda didn't want to enshrine gender equality, but the "complementarity" of man and woman, which is just a way of justifying discrimination. This, of course, led to further conflicts. Following a major mobilisation of progressive forces, the concept of gender equality was enshrined in the constitution. The situation eased again after that – also because political Islam had been weakened in the region as a whole.

Are there any issues on which both groups are fighting together?

Frawes: Once the 2014 constitution had been adopted, Ennahda underwent a reorganisation. We say the party "tunisified" itself and decided to stop calling women's rights into question. That meant we could work together again, first and foremost on Law 58 for the protection of women against violence. I recall conversations with Ennahda deputies in the relevant parliamentary commission, where they served as a bridge between the parties because they saw that we are all united by the battle against violence. It was, of course, also a way for them to prove that they are feminists.

Today, Ennahda women are also fighting against authoritarian tendencies under Kaïs Saïed. We in the progressive-democratic camp may be marching separately from them, but together we want the country to find its way back to democracy and the rule of law.

Lawyer and women's rights activist Yosra Frawes, born in 1979 in Jedeida near Tunis, played a key role in the implementation of pro-women laws such as gender equality in the Tunisian constitution of 2014 and the 2017 law to protect women against violence. From April 2018 to June 2021 she was President of the Association Tunisienne des Femmes Démocrates (ATFD). In 2022, she was awarded the Anne Klein Prize by the Heinrich Böll Foundation in Berlin in recognition of her work.

Tourists have been returning to Tunisia, Egypt and Morocco. But, given the global uncertainty caused by the Ukraine war, will the comeback be enough to save a struggling sector, ... END_OF_DOCUMENT_TOKEN_TO_BE_REPLACED

By 2050, the Middle East and North Africa could be dealing with many more elderly people suffering from dementia. A lack of facilities, specialists and local knowledge means the ... END_OF_DOCUMENT_TOKEN_TO_BE_REPLACED

For the first time since 1989, Algeria‘s authoritarian regime has sent a military parade marching through Algiers. A formidable show of strength designed to impress rival regional ... END_OF_DOCUMENT_TOKEN_TO_BE_REPLACED

Although many Arabs express sympathy for the Ukrainian people, social media reveals a current of support for Russian President Vladimir Putin that is rooted in polarisation, ... END_OF_DOCUMENT_TOKEN_TO_BE_REPLACED
Author:
Claudia Mende
Date:
Mail:
Send via mail

END_OF_DOCUMENT_TOKEN_TO_BE_REPLACED
Social media
and networks
Subscribe to our
newsletter