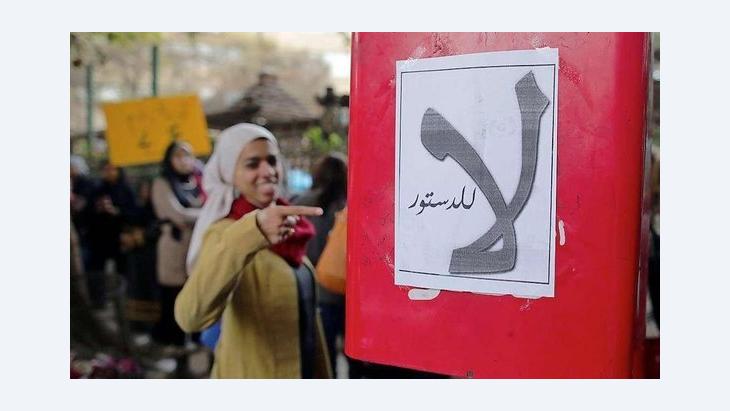 Referendum on the Constitution in Egypt

Resistance from the ''Cradle of the Revolution''

﻿It was not only in Cairo that the majority voted against the draft constitution; in the industrial city of Mahalla El-Kubra, which used to be the stronghold of resistance to the Mubarak regime, most people voted "no". Markus Symank spoke to people in the city

﻿Flip-flops on his feet, Mohammed Sharif picks his way through the puddles of sewage water and the piles of burst rubbish sacks to the girls' school in Mahalla city centre. The air is thick with the stench of faeces. The queue outside the building, which today serves as a polling station, is several hundred metres long.

For two years now, the mechanic has not missed a single poll; every single time, he has voted for the Islamists. But not today. "Egypt does not belong to a party; it belongs to us all. This constitution only serves the Muslim Brotherhood," says the 33-year-old angrily, before going on to speak about his workshop, which was burgled only recently, about the unbroken rise in gas prices and about invoices that continue to pile up. "We thought that the Islamists would understand us poor people; after all, they suffered under the old regime too. Instead, all they are interested in is power."

In Mahalla, a working-class city with just under 500,000 inhabitants in the densely populated Nile delta, many people share Sharif's views. According to projections, about 52 per cent of voters in Gharbia Governorate (to which Mahalla belongs) rejected the starkly religious draft constitution. This means that Gharbia has bucked the national trend. According to unofficial figures, a slight majority, 56.5 per cent of the population in the ten governorates that have already been called to the polls, has voted in favour of the constitution. 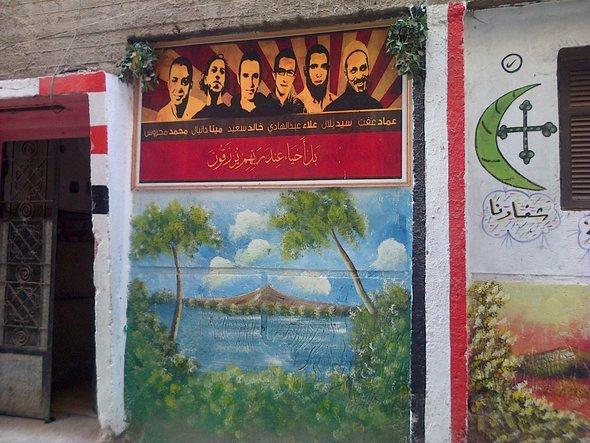 The vanguard of the resistance: in Mahalla, the birthplace of the 6 April movement, the majority of voters rejected Egypt's draft constitution. We didn't risk our lives during the revolution for that!" says Ayman Abdel Monim

​​"We are tired of being told what to do," says physics student Ayman Abdel Monim from Mahalla. "The preacher in my mosque claims that anyone who votes 'no' to the constitution will go to hell. I mean, what has the constitution got to do with God? Aren't we all Muslims?" Abdel Monim is very disappointed in President Mohammed Mursi. He says: "He's nothing more than a copy of Hosni Mubarak. He even uses the same conspiracy theories. We didn't risk our lives during the revolution for that!"

Rebellion against the new rulers

The anger of the people in Mahalla should make the Muslim Brotherhood pause for thought. People in Egypt say that the city is always before its time. It was here, for example, that thousands of people first took to the streets to protest against the regime in 2006. When the police brutally suppressed a workers' strike on 6 April 2008, angry citizens burned images of Hosni Mubarak in public and stormed the offices of his party, something that had never previously been done before in Egypt. And so, the 6 April movement, whose Internet activists played a leading role in the revolution last year, was born.

Now it is the headquarters of the Muslim Brotherhood's Party for Freedom and Justice that many see as a symbol of oppression. On 27 November, unknown persons set fire to the Islamists' building. A broken window and soot-stained walls bear witness to the attack.

Ten days later, thousands of opponents of both Mursi and the Muslim Brotherhood declared the independence of the "Republic of Greater Mahalla". Activists blocked train tracks, set up road blocks, occupied the building with the city council meets. "We secede from the state of the Muslim Brotherhood" shouted the leaders of the insurrection.

According to a trade union leader at the local Misr weaving mill, the largest textile factory in the country, the declaration of independence was not meant seriously: "The anger with the Muslim Brotherhood, on the other hand, is very real indeed. We fully expected the Islamists to work for fairer wages. Instead, they just tried to fill the trade unions with their own people." 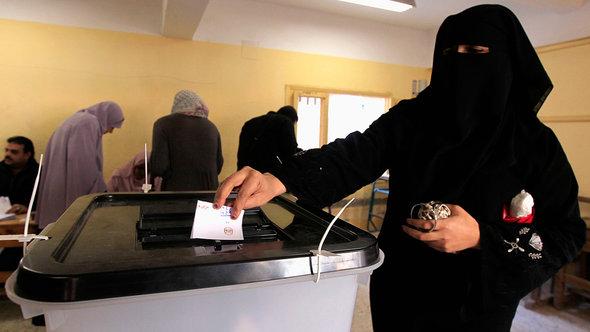 "We only monitor what happens outside the polling stations," says a policeman in Mahalla. "Inside, the Muslim Brotherhood is in control"

Sandwich seller Mohammed Sabri has parked his mobile sandwich stand a few street corners along from the factory. He just cannot understand what all the fuss is about. "No president in the world can rule a country without a constitution," says the skinny young man with the long beard. Sabri has plastered his stand with posters that read "Yes to the constitution" and "Yes to Islamic law".

He does not think it is possible that the constitution will be rejected. "The liberals are afraid of free elections," he says. "They know that they don't have the backing of the streets." An older woman agrees with him: "We have to give Mursi more time. The opposition is just blocking everything. It doesn't have any ideas of its own."

The Muslim Brotherhood recently published figures that indicate that 56.5 per cent are in favour of the constitution. Apart from Gharbia, only the capital, Cairo, has voted against the religious constitution. However, only 33 per cent of those eligible to vote actually did so. The remaining provinces will be called to the polls in a week's time.

Calls for a new referendum

Left-wing and liberal parties are saying that there are instances of electoral fraud and say that the majority voted "no". They are calling for a new referendum. Civil rights groups complained that there were more than 4,000 infringements of the electoral law. They also claim that the referendum was not sufficiently monitored by judges in many localities.

What's more, they say, some people falsely claimed to be judges, the counting of votes was not always monitored, and some Christian women were prevented from taking part. There were reports from several regions of activists being intimidated by radical Islamic Salafists. All told, however, the day of the referendum went peacefully.

When asked about the credibility of the poll, a policeman in Mahalla just laughs. "We only monitor what happens outside the polling stations," he says. "Inside, the Muslim Brotherhood is in control."

The village of Vakıflı in the southern Turkish province of Hatay near the Syrian border, population 150, is the last remaining Armenian village in Turkey. Lately, interest in the ... END_OF_DOCUMENT_TOKEN_TO_BE_REPLACED

Social media make many things possible – including the unwanted circulation of intimate private photos. This has given rise to new forms of crime and sexual blackmail. An ... END_OF_DOCUMENT_TOKEN_TO_BE_REPLACED

The change in U.S. president is also having an impact on the conflict between Turkey and Greece. Since the USA has started to play the Greek card, the strategic situation in the ... END_OF_DOCUMENT_TOKEN_TO_BE_REPLACED

Arab women played a leading role in the protest movement of 2011. Since then, ongoing social transformation has had a considerable impact on their lives. What is their assessment ... END_OF_DOCUMENT_TOKEN_TO_BE_REPLACED

They’ve already got the Louvre; they’ll soon have a Guggenheim Museum as well – and now the Emirates have added literature to their quest for cultural supremacy in the Arab world ... END_OF_DOCUMENT_TOKEN_TO_BE_REPLACED

Years in the making, Sisi's elite New Administrative Capital will isolate most Egyptians from their centres of government in an effort to fortify the regime against any social ... END_OF_DOCUMENT_TOKEN_TO_BE_REPLACED
Author:
Markus Symank
Date:
Mail:
Send via mail

END_OF_DOCUMENT_TOKEN_TO_BE_REPLACED
Social media
and networks
Subscribe to our
newsletter