On the whole, it is difficult to gather a complete picture of the situation on the ground in Libya. There are two camp systems, Kopp said. There are the official Libyan Government of National Accord's camps – where many atrocities take place "in close co-operation with the EU" – and then there are unofficial detention camps.

The coast guard, which is responsible for the official camps, is made up of religious extremists, militiamen, people smugglers and in some cases also human traffickers, as UN reports have already documented. At least part of the coast guard has been involved in human trafficking or continues to help carry it out. 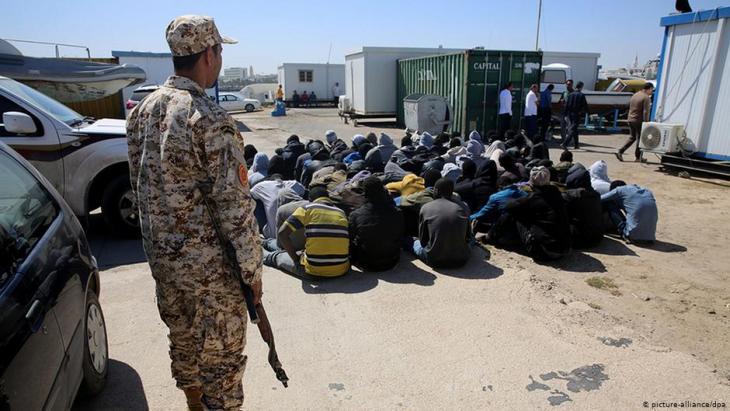 A brutal environment: according to Sarah Chynowethʹs report, sexual violence is perpetrated for a number of reasons. Used for blackmail, attacks are also carried out for the entertainment of security guards, and to punish and kill people who are considered worthless. "If a man tries to escape, all other men are forced to rape him. People are regularly punished, forced into submission and controlled," says Chynoweth

"The EU has not placed much importance on closing the camps it has access to and freeing people," said Kopp. "The EU is financing criminals who call themselves part of the coast guard. We are saying quite clearly that this is part of European refugee policy."

According to the Women's Refugee Commission's report, sexual violence is perpetrated for a number of reasons. As well as being used for blackmail, the attacks are also carried out for the entertainment of security guards, and to punish and kill people who are considered worthless. "If a man tries to escape, all other men are forced to rape him. People are regularly punished, forced into submission and controlled," said Chynoweth.

When it became known that people in Libya were being sold as slaves, EU representatives promised to evacuate them and bring them to Europe legally. Pro Asyl is critical of how this has been handled: "This process has been so slow and there are so few countries willing to accept them that the UNHCR says these people must stay in detention camps until there are places for them. These people's suffering is linked to an inhuman European refugee policy."

The European Court of Justice has given its backing to companies that don't allow female Muslim staff members to wear headscarves – as long as they don't permit the wearing of ... END_OF_DOCUMENT_TOKEN_TO_BE_REPLACED

The disappearance of Razan Zeitouneh and her colleagues has been one of the greatest mysteries of the Syrian war – until today. DW's investigative unit hunted clues across six ... END_OF_DOCUMENT_TOKEN_TO_BE_REPLACED

Muslims in Europe regularly experience threats, witness attacks and are the target of hate across national borders. Now the Council of Europe, the continent's leading human rights ... END_OF_DOCUMENT_TOKEN_TO_BE_REPLACED

The West is pulling out of Afghanistan after 20 years, but the conflict remains – and the Taliban are stronger than they have been for a long time. And now? The renowned Taliban ... END_OF_DOCUMENT_TOKEN_TO_BE_REPLACED

United States and NATO troops are leaving Afghanistan after 20 years, despite the fact that the Taliban is still advancing. The German Bundeswehr is already out. Sandra Petersmann ... END_OF_DOCUMENT_TOKEN_TO_BE_REPLACED
Author:
Nermin Ismail
Date:
Mail:
Send via mail

END_OF_DOCUMENT_TOKEN_TO_BE_REPLACED
Social media
and networks
Subscribe to our
newsletter