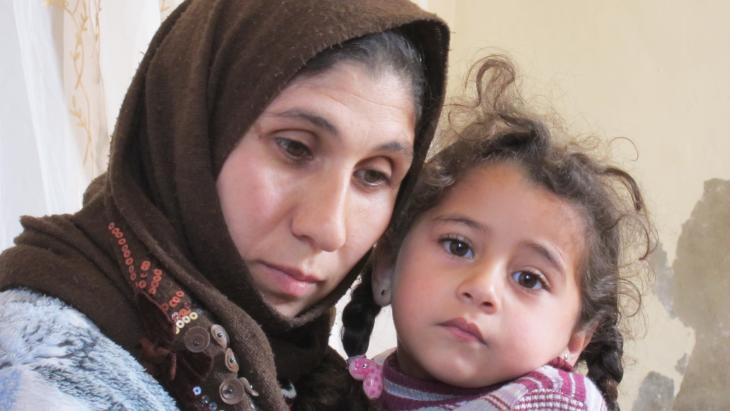 Refugee Crisis in Jordan
At the Breaking Point

Jordan has accepted around 600,000 Syrian refugees to date, and more are on the way. Although Jordan is continuing to show a considerable willingness to help, the fact that there is no foreseeable end to the Syrian civil war has led to growing frustration among Jordanians due to rising rents and increasing competition on the labour market. By Claudia Mende

Inam (pictured above with her daughter Najah) lives with her husband and their five children in a stone house on the outskirts of Irbid, a city near the Syrian border. Her greatest worry is the health of her children this winter. Although their ice-cold living quarters has a place to cook and a heating oven, they don't have any fuel tanks.

The 30-year-old mother arrived here nine months ago from the Syrian village of Daraa. The family fled to Jordan across the Yarmouk River and prefers not to have their family name publish out of fear for their safety. Although times are difficult, they have been able to make do with the occasional job found by her husband Bilal and the food vouchers the family is now receiving from the UNHCR.

It is only some 15 kilometres to the Syrian border from here. Exhausted Syrian refugees, some of them wounded, arrive every day. The newcomers are met by soldiers of the Jordanian army and, if necessary, they are brought to Irbid's only hospital.

In the shadow of the refugee crisis

The people on both sides of the border are closely related in terms of ethnicity, culture, and language. There are many family connections that span the border region. Inam also has relatives on the Jordanian side of the border. The Jordanians have shown a great willingness to help, especially early on in the crisis. Yet, the dimensions of the refugee drama are beginning to push all those involved to the breaking point. 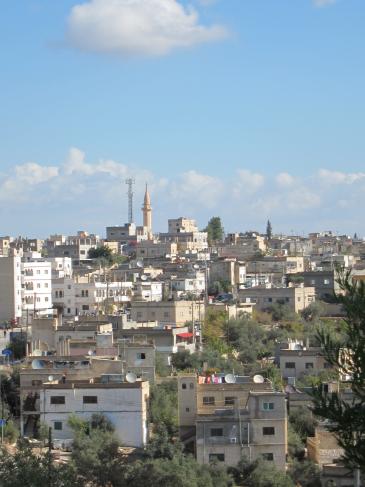 The refugee crisis is now part of everyday life in Jordan's third largest city: In Irbid alone, the UNHCR has registered around 130,000 Syrian refugees

Irbid is Jordan's third largest city with around 650,000 inhabitants. At first glance, life in this university city seems remarkably normal, despite its geographic proximity to Syria. Yet, the refugee crisis is now part of everyday life in the city. The UNHCR has registered some 130,000 Syrian refugees. There are an estimated 600,000 refugees in the whole of Jordan, and they live all over the country. Many have located in the north of Jordan, to the east of Amman, and, increasingly, in the south.

The hospital in Irbid has treated 4500 Syrians in 2013, complains Badr Al-Qadi, the district governor. However, the necessary financial resources for staff and equipment at the hospital have not been increased. The Al-Mothanna School in Irbid used to have a thousand pupils, now there are twice as many. Classes are taught in two shifts. In addition to the regular morning classes, a second afternoon session has been introduced.

This is not an isolated case. A total of 25 such "double shift" schools can be found in Irbid. "We are also under pressure for another reason," explains Nawaz Titi, the school principle. Many Jordanian parents have recently had to take their children out of the private schools they had been attending, as they could no longer afford tuition. Now these children go to the much more affordable public schools. In 2012, UNICEF paid for the new teachers and materials needed to accommodate the influx of students. The European Union will provide assistance for the 2014 school year. The schools are left on their own to deal with other problems related to the refugee crisis, such as the aggressive behaviour of traumatized Syrian children.

A rise in prices

The cost of living in Jordan is high. Fuel, gas for heating and cooking, as well as food have risen in price since the government cut subsidies under pressure from the International Monetary Fund. In a survey conducted by the Center for Strategic Studies at the University of Jordan, around 80 per cent of residents questioned in the city of Mafraq, located some 60 kilometres north of the capital Amman, feel that Syrian refugees should be housed in refugee camps, where they would not be competing with the local population for jobs and housing.

Syrian refugees now make up the majority in Mafraq. Power and water outages are on the increase. There is not enough garbage disposal or street cleaning to serve the increased population. The rents have since tripled in price and now pose an enormous financial burden for most families. Many property owners are said to have evicted their Jordanian tenants in order to collect far higher rents from Syrian refugees. 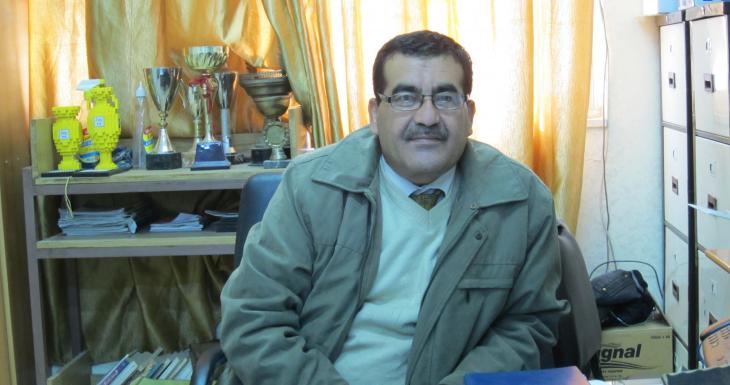 Schools under pressure: The Al-Mothanna School in Irbid used to have a thousand pupils, now there are twice as many. Classes now have to be taught in two shifts, explains school principle Nawaz Titi

Officially, the Syrians are not allowed to work, but the authorities have turned a blind eye to the practice. Refugees are particularly noticeable in certain sectors, such as restaurants, construction, and agriculture, where working conditions are considerably worse than at jobs held by locals. There are reports of starvation wages far below the legal minimum wage of 115 Jordanian Dinars a month (approximately 110 euros). The cheap labour force from Syria has pushed down wages in general, which has let to massive discontent among Jordanians.

Growing tensions and feelings of resentment

There have already been some skirmishes in Mafraq recently, including the burning of car tires and broken windows at organizations aiding Syrian refugees. However, one could search in vain for reports on such events in the Jordanian media. Behind closed doors, one often hears that many Jordanians are simply fed up with Syrian refugees.

Aid organizations recognize the problem and are increasingly attempting to include needy Jordanians in their projects. "Yes, there are tensions, particularly in the north," admits Michele Servadei, Deputy Director of UNICEF in Jordan. "What is very positive is that tensions have not yet escalated. In order to prevent this from happening, we absolutely have to do more for needy Jordanians."

At present, nobody expects that the Syrians will want to stay in Jordan forever. Refugees like Inam and her family would prefer to return to Syria as soon as possible. It just might not be possible to fulfil her wish any time soon.

After a two-year hiatus, the Arab League re-convened at the beginning of November in Algiers against a backdrop of uncertainty and discord. By Pierre Boussel END_OF_DOCUMENT_TOKEN_TO_BE_REPLACED

In the run-up to the COP27 global climate summit, hosted by Egypt in November, it is worth noting that little rainfall, aggressive heatwaves and worsening drought make the Middle ... END_OF_DOCUMENT_TOKEN_TO_BE_REPLACED

In this essay, renowned Lebanese journalist and writer Hazem Saghieh asks whether the Arab Levant, which stretches from Iraq in the east to Egypt in the west, will remain an ... END_OF_DOCUMENT_TOKEN_TO_BE_REPLACED

With his fist bump greeting for a man he previously called a pariah, US President Biden has paved the way for Saudi Crown Prince Mohammed bin Salman's return to the international ... END_OF_DOCUMENT_TOKEN_TO_BE_REPLACED

The murder of a female student at Mansoura University in the Nile Delta has sparked a long overdue debate on femicide in Egypt. Karim El-Gawhary reports from Cairo END_OF_DOCUMENT_TOKEN_TO_BE_REPLACED

When times are tough, the exchange of ideas and perspectives becomes especially important. It takes dialogue. And at Deutsche Welle, we need distributors and cooperative partners ... END_OF_DOCUMENT_TOKEN_TO_BE_REPLACED
Author:
Claudia Mende
Date:
Mail:
Send via mail

END_OF_DOCUMENT_TOKEN_TO_BE_REPLACED
Social media
and networks
Subscribe to our
newsletter