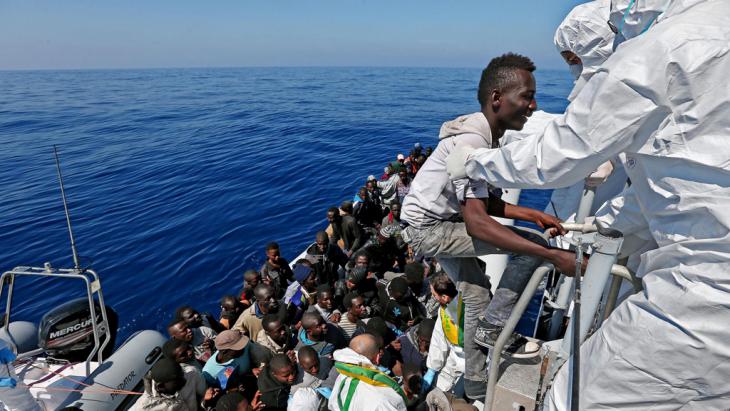 Refugee crisis in the Mediterranean

The UN Security Council is set to vote on the EU's proposal for military action against people smugglers in the Mediterranean. But who are these people smugglers? What form do their networks take? And are they really a security threat? By Lewis Sanders

The people-smuggling trade in Egypt has existed for years, mostly operating out of rural villages. But following the influx of Syrian refugees to Egypt, a new network has emerged, and it relies heavily on Syrians in Egypt to conduct its business.

Tom Rollins, a journalist working on refugee migration in the Mediterranean, says that while there is a hierarchy to the Syrian networks in Egypt, much of the trafficking works organically. He says that the networks are typically comprised of a kingpin and simsars, or brokers, who serve as middlemen between potential migrants and those who operate the boats.

"It's a local business," says Rollins of the Syrian network in Egypt. Brokers in the network based in urban areas – as opposed to traditional Egyptian networks – offer up to 10 Egyptian pounds (€1.15) to Syrian shopkeepers per referral, a former staff member at a refugee aid organisation in Egypt said on condition of anonymity. Smugglers then hand the refugees and economic migrants on to boat operators, mostly poor fishermen.

"The smuggler won't be in the boat. He will be in his office counting the money," the former staff member added, highlighting the hierarchy in monetary distribution among the network's players. The cost of securing passage on a ship is estimated at between $1,500 and $3,000, most of which lands in the pockets of the network kingpin, with smaller cuts going to the boat operators and simsars. 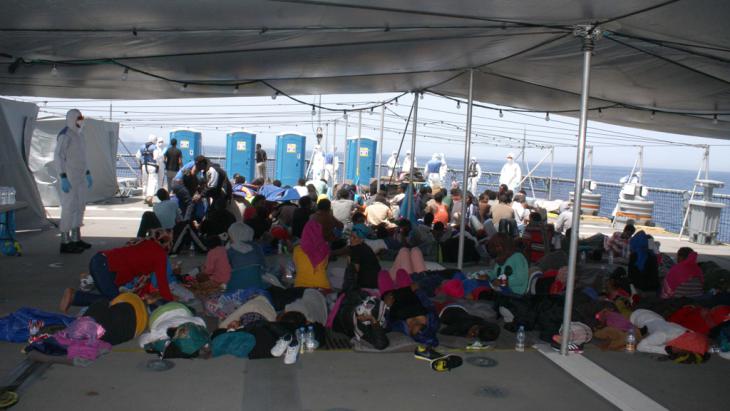 Refugees picked up by the German frigate "Hessen" off the coast of Lampedusa. Federica Mogherini, High Representative of the European Union for Foreign Affairs, called on the international community to take urgent steps to end the Mediterranean crisis and dismantle the human smuggling rings that facilitate it. ''The EU is united and we will work, but we cannot work alone. We need to share and act together, as it's an EU responsibility and a global responsibility," said Mogherini

The people-smuggling trade in Egypt has picked up significantly due to the influx of Syrian refugees who cannot officially work in Egypt, which forces them to resort to the informal economy or to try to move on and seek a better life elsewhere. More than 130,000 Syrian refugees are registered in Egypt, a substantial increase from 13,000 in January 2013, according to figures provided by the UN High Commissioner for Refugees (UNHCR).

Meanwhile, the UN Security Council is set to vote in favour of an EU proposal to use military action against people smugglers to address the migration crisis on the Mediterranean.

The International Organization for Migration (IOM) has backed the proposal, but is concerned that military action against people smugglers "could further endanger migrant lives." IOM spokesperson Joel Millman says that the solution cannot be resolved by taking military action, although traffickers need to be targeted. "The top priority must be safeguarding migrants' lives," he said. "Destroying a raft or a boat is not a solution. A sunken boat can be replaced. A human life cannot."

However, the question over whether people smugglers should be targeted continues to be a security concern. "The fisherman who sells his boat is not the criminal; he may not even be there when the boat was deployed full of migrants. We are angry about the reckless tactics of the traffickers who overload those boats and make them unsafe," said Millman. "We don't know if the fishermen are doing this," he added. "If they are, they should be targeted. But mostly we hear of traffickers filling boats beyond their safe capacity."

Home
Print
Newsletter
More on this topic
After the refugee catastrophe in the Mediterranean: How the EU is killing refugeesSyria and the international community: The least we can do for SyriaYemeni refugees in Cairo: An unwelcome exilePhoto gallery: The Rohingya refugee crisis
Related Topics
Policy on refugees and migration, Refugees, Syrian Civil War
All Topics

Napoleon Bonaparte’s 1798 invasion of Egypt represented the first modern attempt to incorporate an Islamic society into the European fold. Although the expedition was a military ... END_OF_DOCUMENT_TOKEN_TO_BE_REPLACED

The outpouring of solidarity worldwide following the violent death of George Floyd should prompt us to step back and fundamentally question racist structures and privileges based ... END_OF_DOCUMENT_TOKEN_TO_BE_REPLACED

Has it ever crossed your mind that you are eating plastic on a daily basis? That you are drinking it? Apart from the thousands of trending pictures and videos on social media of ... END_OF_DOCUMENT_TOKEN_TO_BE_REPLACED

Libya's plight resembles that of other war-torn countries in the Greater Middle East: internal conflict has spiralled out of control because of misguided foreign intervention. ... END_OF_DOCUMENT_TOKEN_TO_BE_REPLACED

The Arab world suffers from a system in which people are intolerant of "the other". This racist environment contributes to the growth of hostility and antagonism towards anyone ... END_OF_DOCUMENT_TOKEN_TO_BE_REPLACED
Author:
Lewis Sanders
Date:
Mail:
Send via mail

END_OF_DOCUMENT_TOKEN_TO_BE_REPLACED
Social media
and networks
Subscribe to our
newsletter