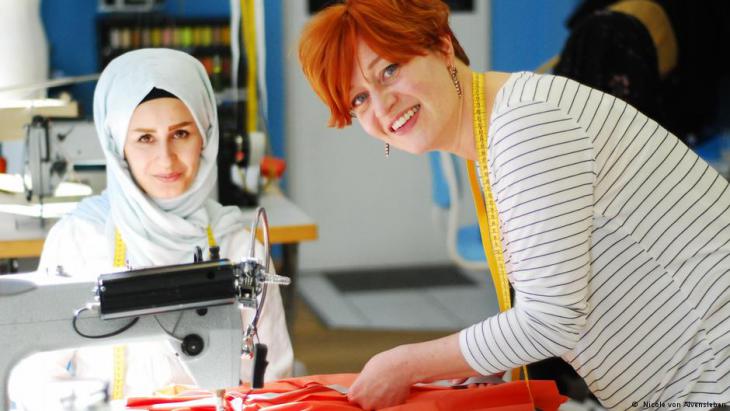 A future made to measure

Integration in the workforce and a sustainable business idea: the Frankfurt dressmakers' studio offering prospects to refugee women – and becoming the go-to place for the region's start-up labels in the process. By Esther Felden

Reyhane cuts the fabric to size with a practised hand, a look of complete concentration on her face. Then she irons the pieces, sits down at the sewing machine and sews them together. Blouses, dresses, coats. Whatever the clients of the "Stitch by Stitch" atelier have ordered. Reyhane is training as a seamstress there. Or rather, she's working to get her apprenticeship diploma. Reyhane has been a professional for years – she just has nothing to prove it. She's never been given employers' references or anything similar. And neither have her colleagues.

Reyhane is one of seven young women from Afghanistan and Syria who have found jobs with the social enterprise in Hesse. The two women behind the name "Stitch by Stitch" are qualified designer and social entrepreneur Nicole von Alvensleben and Claudia Frick, who studied fashion design and is a bespoke dressmaker. The idea for the project came to them just under two years ago – at a time when the images of large numbers of refugees in the summer of 2015 were still fresh.

The two were already looking to take their careers in a new direction and build a fashion business of their own. And then fate came to their aid – in the form of Frick's partner.

"Why don't you try doing something with refugees?" he said. And that question set everything in motion. Initially, Claudia Frick wasn't completely convinced by the idea; she thought it was too vague and didn't seem like something they could put into practice. On the other hand, she had spent a long time looking for a manufacturing company that could produce clothes for her boutique fashion label "Coco Lores" in small quantities. "And there are hardly any of these companies in Germany now; there was clearly a need." 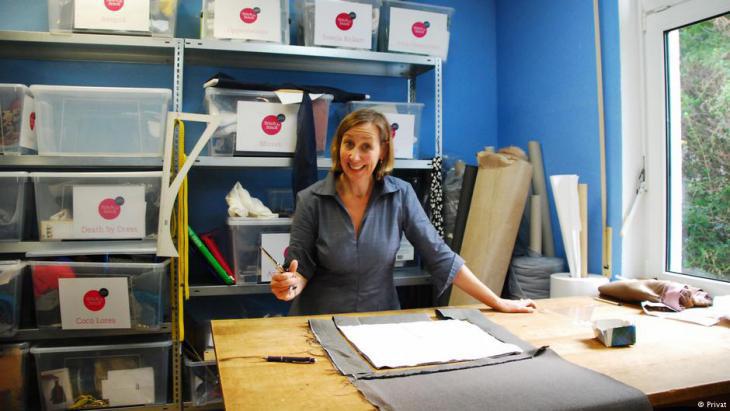 Integrating with a needle and thread: qualified designer and social entrepreneur Nicole von Alvensleben is responsible for the finances and organisation of the "Stitch by Stitch" atelier: "We are one big family"

Nicole von Alvensleben was quickly convinced. It made sense from a business perspective, too. "I was really hooked on the idea of finding an entrepreneurial solution for a social problem." Training refugee women in Germany to become respected dressmakers, giving them career prospects and at the same time helping them to integrate – the concept wove all these ideas together. And it convinced other people, too. The two women received Flagship Project status for their idea from the KfW-Stiftung (the German State Reconstruction Loan Corporation) and were also awarded the Frankfurt Startup Award in 2017.

A success story on fast-forward

The little business has developed rapidly in the short time since it was set up. Just nine months passed between the initial idea and the opening of the atelier in August 2016.

"To start with we had no financial backing at all. We took out a micro loan to finance ourselves," von Alvensleben explains. The initial investment was then secured with the help of a cash injection from the KfW-Stiftung. The project is now also supported by the City of Frankfurt. "But in the long term, we aim to be completely self-financing."

Home
Print
Newsletter
More on this topic
Showcasing integration at "Rita in Palma": A hive of industryGermany′s integration debate revisited: Piling on the pressureWhat it means to be German: Recognise the potential
Related Topics
Integration in Germany, Islamic lifestyle, Muslims in the West, Refugees
All Topics

Business in the Moroccan city of Tangiers is booming due to its location at the nexus of global trade routes. But many locals are failing to reap the benefits. What they crave ... END_OF_DOCUMENT_TOKEN_TO_BE_REPLACED

Morocco and the European Union are at cross purposes when it comes to the Western Sahara. And, as Germany does not support Moroccan claims to the territory, a major conflict has ... END_OF_DOCUMENT_TOKEN_TO_BE_REPLACED

Jewish voices are much more diverse than the public often sees. Jewish men and women who oppose the injustice of Israeli occupation in the West Bank deserve our respect and ... END_OF_DOCUMENT_TOKEN_TO_BE_REPLACED

They’ve already got the Louvre; they’ll soon have a Guggenheim Museum as well – and now the Emirates have added literature to their quest for cultural supremacy in the Arab world ... END_OF_DOCUMENT_TOKEN_TO_BE_REPLACED

The Germans have a fragmented perception of the conflict between Israel and the Palestinians, and their discourse is dominated by certain catchphrases. All the while, there is a ... END_OF_DOCUMENT_TOKEN_TO_BE_REPLACED

An unusual organisation brings Jews and Muslims together to fight hate and promote dialogue. In the small central German city of Marburg they have been jointly calling for an end ... END_OF_DOCUMENT_TOKEN_TO_BE_REPLACED
Author:
Esther Felden
Date:
Mail:
Send via mail

END_OF_DOCUMENT_TOKEN_TO_BE_REPLACED
Social media
and networks
Subscribe to our
newsletter