Refugees and Emigrants in Mali
The Dream of a Better Life

Many Malians try to escape gloomy prospects at home by fleeing to Europe. But Mali is also a transit county for refugees from other African countries. NGOs are now trying to advise the refugees, some with financial support from the EU. A reportage by Klaus Sieg

The CIGEM is the first advice center for EU migrants outside Europe. It is aimed at informing potential emigrants about legal migration opportunities

​​ It still smells of paint at the Centre d'Information et de Gestion des Migrations (CIGEM) in the Malian capital Bamako. There are new flat-screen computers on the desks. The chairs look pretty much unused.

Samba Goïta carefully takes a seat. His striped shirt is immaculately clean, his trousers have been neatly pressed.

The 30-year-old crosses his legs and looks at the adviser. Samba Goïta wants to emigrate. Preferably to Canada, where a friend of his lives. "But I'd also like to go to Europe," says Samba Goïta and touches the frames of his sunglasses, the ceiling ventilator reflected in the lenses.

The risks of illegal migration

The CIGEM is the first advice center for EU migrants outside Europe. It is aimed at informing potential emigrants about legal migration opportunities. Vocational training aims to help people in their job search. Returnees receive support as they reintegrate into their homeland. But the center's primary aim is to warn people of the risks of illegal emigration.

According to UNHCR statistics, 120,000 refugees from Africa try to reach Europe via the Mediterranean each year. In 2008, 65,000 of them ran ashore along Europe's coastline. The rest are either caught en route, get stuck in transit countries – or die.

It is seldom that the squeaky-clean tiled floor of the CIGEM rings out with the sound of footsteps. There were just two clients here today. On busier days, that number rises to at least 10. The CIGEM is still a very young pilot project. But perhaps potential clients are already aware of the few legal immigration possibilities and save themselves the trip to the outskirts of Bamako.

Mali's border is 7,000 kilometers long. Many refugees from countries south of the Sahara travel through the West African nation on their way north. They try to reach Mauritania, Morocco or Libya. Once there, they wait for a chance to enter Europe. On rickety sloops, in the back of a truck or with a jump over the border fence of the Spanish enclave Ceuta – something hardly anyone succeeds in doing these days. Most of these people end up back in Mali, deported by border officials or police from neighboring countries to the north.

Money pouring in from abroad

But many people from Mali itself also try their luck on the road. Four million Malians live and work away from home, 3.5 million of them in other African countries. Mali is one of the world's poorest countries. It is primarily young Malians who traditionally seek their fortune in faraway places. The total amount of money sent home by these migrants is more than Mali's entire development aid budget. 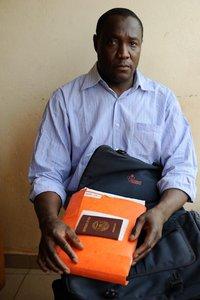 Not put off by the risks and dangers of clandestine emigration: Adoma Sangaré

​​ "All the new houses in this street were built by people who work abroad." Adoma Sangaré points at the street below. Flat clay constructions line the wide sand track. Two men rattle by on a Chinese moped, which kicks up a cloud of dust behind it. Very few roads in the Malian capital have an asphalt surface.

Adoma Sangaré sits here with a group of friends on this street corner in the district of Kala Bancoura. They play cards on a battered old table. None of the young men has a job. Adoma Sangaré's brother works as a gas station attendant near Paris. He feeds the whole family. He traveled to France on a tourist visa. Then he went to ground.

"In Europe, you earn more in one year than you would here in your whole life," says Adoma Sangaré and the others nod in agreement. "Why shouldn't I try it too?"

Well, there are the risks and dangers of clandestine emigration. A life in illegal limbo. Economic crisis and unemployment. The 25-year-old puts up his hand and shrugs. "Even if it's difficult where you come from, it's always going to be easier than here," he says.

The lure of Europe

In the towns and cities of Mali you meet people everywhere who think – and dream – like this. Television images, stories and impressions of Europe appear to have a huge potency. This is compounded by the desperate economic situation in Mali, as well as pressure from families. "My father asks me every day how much longer I plan to wait," says Adoma Sangaré, looking down the street.

But just as often, you meet people in Mali whose emigration hopes have been dashed. Most of them do not even dare to return home. The shame and despair are just too great. Often, families have gone into debt to pay the traffickers and transport costs. Then the chosen one reappears at the door. One more mouth to feed, instead of a provider for the whole family.

A self-help organization of refugees

Bertrand Couture crouches in the shadows of a doorway and gazes listlessly at the ground. He comes here every day. The small door leads to the office of the Association des Refoulés d'Afrique Centrale au Mali (A.R.A.C.E.M.), a self-help organization of refugees from different African countries who have become stranded in Mali. There is only just enough space in the windowless room for a wooden table, two chairs and an old computer.

​​ From here, the two founders of the organization Ntamag Romeo and Patrice Zinahad try and improve the situation of the marooned refugees as best they can. For example, in cooperation with the local police they issue temporary papers so that the migrants can identify themselves if required to do so. Most of them have lost all their documents in transit.

At the A.R.A.C.E.M., Bertrand Couture meets his friend Omare Nelgida from Chad. They chat about this and that, and daydream about pursuing a soccer career in Europe. Most of the time though, they just kill time.

Bertrand Couture left Cameroon seven years ago – in search of a better life. He has since been to Nigeria, Benin, Burkina Faso, Mauritania, Algeria and Morocco. He spent the longest time in Morocco, waiting for an opportunity to reach the Spanish enclave Ceuta. The first time he climbed over the fence was in August 2001. But the Spanish Guardia Civil marched him straight back out.

Bertrand Couture tried to storm fortress Europe in this manner a total of seven times. The 26-year-old slept together with other refugees in a nearby forest. Many of the men suffered fractures and other injuries trying to scale the fence, which the Spaniards erected higher and higher from month to month. They had to forage for food on a garbage dump.

"Sometimes we hunted wild dogs and ate them," says Bertrand Couture, wiping his face with the flat of his hand. Eventually, the Moroccan police caught up with him and deported him to Algeria. He was transported southwards from prison to prison. "The police tormented and hit us," he reports. Finally, Bertrand Couture ended up in Mali.

In Bamako, he initially slept for several weeks underneath stalls in a market hall, managing to earn a bit of money to buy food with the odd courier or cleaning job. Now he lives in a house with one hundred other refugees from Cameroon, Togo, Congo and Chad. Up to 10 men share one room. Conditions are miserable.

More and more refugees are getting stuck here because fewer people are managing to emigrate since the EU tightened border controls. Very occasionally, one of the men might find a job on a construction site, or at the market. "I am completely exhausted," says Bertrand Couture with half-closed eyes. Why does he not go back to Cameroon? 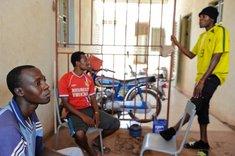 ​​ "My father said to me on the telephone that I should only come home if I've got some money." Bertrand Couture plucks at his Brazilian national squad jersey, which bears the number 9 for Ronaldo. A friend sent it to him – a friend who managed to make it to Europe.

Keita Diawoye also succeeded in entering Europe. He sits on the balcony of the office of the Association Malien des Expulsés (A.M.E.). The association tries to help Malians who have been deported from France find their feet again back home. France is home to the largest Malian community in Europe. But Sarkozy's government has tightened laws concerning work and residence permits for migrants. Since then, almost every Air France plane landing in Bamako contains expelled Malians.

Keita Diawoye has a stack of papers on his lap, meticulously sorted according to individual years. He worked in France for 15 of those years, mostly as a demolition worker, but also as a kitchen assistant or cleaner. "I paid taxes and social security contributions all that time." Keita Diawoye leafs through the papers. He did not have any kind of residence permit, but presented his employers with a work permit bearing somebody else's name.

Most of the money he earned he sent home, to his village in the province of Kayes in western Mali. The dry fields there are all choked up, rainfall is rare and irregular. His family is barely able to make a living from farming. They were grateful for the regular money transfers from Keita Diawoye. That is, until the day when Keita Diawoye was arrested in Paris as he tried to apply for naturalization.

He is also marooned in Bamako and dares not show his face at home. "What are we supposed to do now, that's what my wife said on the telephone," says the 45-year-old and dabs the sweat from his brow.

At the air-conditioned CIGEM, the advice session is drawing to a close. Samba Goïta nods sagely as the counselor begins to talk about the risks of clandestine migration. Then his eyes light up for a brief moment. He nervously begins to tap his foot. A Spanish vegetable farmer is looking for helpers during the three-month harvesting period.

But Samba Goïta is overqualified. Workers should preferably be illiterate. Furthermore, farming experience is desirable. "I never would have thought that my school and university education would be a disadvantage," he says. Disappointed, Samba Goïta stands up and steps out on the street, which is shimmering in the midday heat.
Will he come back? He is not quite ready to decide that today.

African Refugees
From Somalia to Europe via Yemen
Every year, tens of thousands of Somali refugees cross the Gulf of Aden to reach the country on the southernmost tip of the Arabian Peninsula. While they are not turned away or sent home, their prospects in Yemen are grim. Klaus Heymach and Susanne Sporrer report

END_OF_DOCUMENT_TOKEN_TO_BE_REPLACED
Social media
and networks
Subscribe to our
newsletter