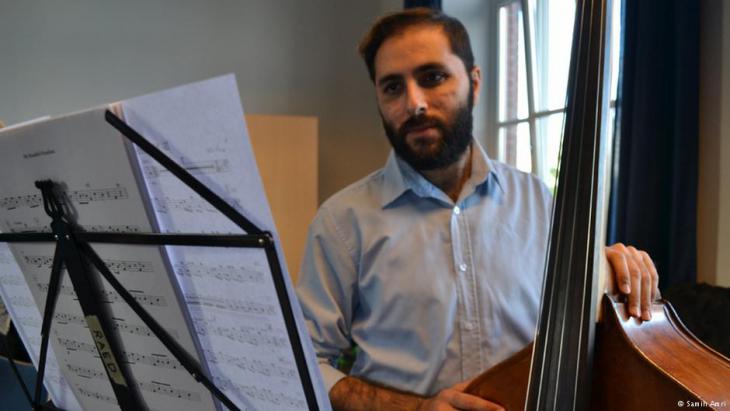 Streams of migration are a challenge. On the move along with individual people are whole cultures, languages and habits that are sometimes not understood outside their homelands. Music, as a non-verbal phenomenon bound up with strong feelings, could operate as a medium for bridging the consequent perplexity. By Hans-Jurgen Linke

Music itself poses a mystery for science. While on the one hand there is no universal grammar that can provide a generally valid explanation of the language of music beyond individually learned forms of expression mediated by and appropriated in various processes of socialisation, it appears, on the other hand, that musical parameters such as rhythm, tone and melody are present in the genetic programme of homo sapiens as a need and as a basis of the expressive faculty.

Although certain types of music are still regarded as regionally bound and conventions, rituals, systems of rules and concepts of sound demarcate musical genres from one another, music has always been a medium of migration and exchange – much more often than languages, which even after and in spite of the integration of foreign influences remain recognisable as separate entities. This results in contradictory, sometimes antagonistic developments.

For example, in the Western music industry today there has arisen out of all sorts of so-called ethnic influences a polymorphous, commercially exploitable ″world music″. Then too the art music that arose in Western Europe now radiates an international appeal and has become a globally relevant phenomenon, far beyond the countries of its origin. Or again we are all familiar with jazz, which is often given the title of serious music, arose out of different musical styles and whose origin appears to lie not in a single region but in the developments of migration and globalisation.

It is reasonable to suppose that music can make a constructive contribution to solving current domestic social and political problems in Western Europe which have been aggravated by the refugee crisis. Yet the situation is anything but straightforward. Refugees as a rule have been driven from their homes by an emergency. They come to us not primarily because they want to learn something new, but rather so as to get to safety or to find new prospects in life.

If they are not simply waiting for circumstances in their homelands to improve, but mean to remain here and desire to integrate themselves into the surrounding society, their priorities are usually to learn the language and find a professionally-oriented education. In such a context, music is perhaps more likely to play the role of a medium of social regression, something to cultivate brought-along feelings and rituals, to which immigrants can invite people from the new environment.

Another situation arises when it is a matter of immigrant professional musicians. They will look for an audience and exchange and probably for people with whom they can play music and remember or re-invent their music. Immigrant musicians bring something with them and expose it to new influences in a strange country, whether they want to or not. Not all of them, however, will endeavour to absorb musical influences from their new surroundings; between the poles of a regressive maintenance of tradition and an open curiosity all other nuances are possible. Then there is the large number of people who simply want to hear music. And then too those who have no interest in music and therefore cannot be reached by music-based integration programmes.

A question of direction

This short drone flight over the subject shows how varied the starting-point is for music that comes in touch with different cultures. It makes little sense to force something upon refugees or immigrants with which they, as individuals, are at a loss to know what to do. By contrast, it is important that a diversity of offerings from which experiences can be developed should be created in this field.

Equally absurd is the idea that there could be a particular social practice about and accompanied by the medium of music that is tailored exclusively to the needs of refugees. Anyone who works with music is fundamentally averse to pre-formed differences and roles. In principle, every listener can become a participating musician, every musician a composer, an orchestra founder, a bandleader. Everything else is decided in the actual practice of music making, which produces fresh experiences.

There is nothing to be said against social musical practice aimed at immigrant groups. Nothing against evening meetings of refugees for the purpose of music making. Nothing against joining experienced musicians into serious, continuing groups. This is all perhaps a bit easier in everyday life, for the same questions preoccupy musicians everywhere: What will I be playing? Where will I be playing and with whom? Is there a fee, perhaps even expenses, and who is paying and how? Where and how can I rehearse without being disturbed? How do I find other musicians? What can we do together and what not? How do I reach and extend my circle of listeners?

There already exist a number of productive approaches and initiatives in Germany. For example, the Oriental Music Academy in Mannheim, founded in 2008, combines socio-cultural community work with nuanced educational services for music and dance and their own events. Together with the project ″Caravan of Music and Poetry″, it has created a forum for ″stranding artists″ that gives them space for their work and networking and at the same time affords access to the living conditions of refugees. In Bremen, the Syrian bassist Raed Jazbeh has established various contacts with other orchestra musicians in western European exile and founded with them the Syrian Expat Orchestra.

The Bavarian Philharmonic for its part has formed a coordinating hub in the loose network of diverse initiatives in Bavaria under the working name of ″Music Creates Home″. It aims to generate key integrative experiences that bring refugees, both as listeners and as musicians, together with the local population.

In these projects, participants recognise and sometimes solve problems. There arise exchanges, discussions and networking, and in this way such projects attract supportive ideas and sponsoring and generate public interest. They create for their music an audience and a new solidarity. Because in this way music functions as an artistic and social and even professional system. Everywhere. Thus music can exert an influence on the lives of refugees. These projects all need serious support.

Home
Print
Newsletter
More on this topic
Interview with the pianist Aeham Ahmad: Bittersweet memories of SyriaArab Youth Philharmonic Orchestra in Berlin: Playing for peaceInterview with Kinan Azmeh and Dima Orsho: "All we can do is sing and play our hearts out"
Related Topics
Arab music, Dialogue of Cultures | Intercultural Dialogue, Education, Migration, Migration in Germany, Musical worlds, Refugees
All Topics

In "Sparks Like Stars", Nadia Hashimi pulls the reader behind the curtain of modern history to peek backstage at the impact of war and terror on individual lives. Richard Marcus ... END_OF_DOCUMENT_TOKEN_TO_BE_REPLACED

In view of the catastrophic supply situation in Afghanistan, UN authorities are sounding the alarm. Inflation and growing poverty are exacerbating the situation. The Taliban ... END_OF_DOCUMENT_TOKEN_TO_BE_REPLACED

China to the east, Russia to the north, Afghanistan to the south: in this geopolitical environment, Kyrgyzstan, which has been independent since 1991, is attempting to make ... END_OF_DOCUMENT_TOKEN_TO_BE_REPLACED

The "War on Terror" has not only failed in Afghanistan, it has exacerbated insecurity and generated more terrorism. This is the main thrust of journalist Emran Feroz in his book, ... END_OF_DOCUMENT_TOKEN_TO_BE_REPLACED

As the Taliban shift their focus from insurgency to government, their most formidable rival is the Islamic State's regional chapter, which has staged a string of bloody attacks in ... END_OF_DOCUMENT_TOKEN_TO_BE_REPLACED

The Taliban’s victory over the United States in Afghanistan will not only greatly embolden their fellow jihadists, but also shake up the region’s geopolitics. An Afghanistan- ... END_OF_DOCUMENT_TOKEN_TO_BE_REPLACED
Author:
Hans-Jürgen Linke
Date:
Mail:
Send via mail

END_OF_DOCUMENT_TOKEN_TO_BE_REPLACED
Social media
and networks
Subscribe to our
newsletter