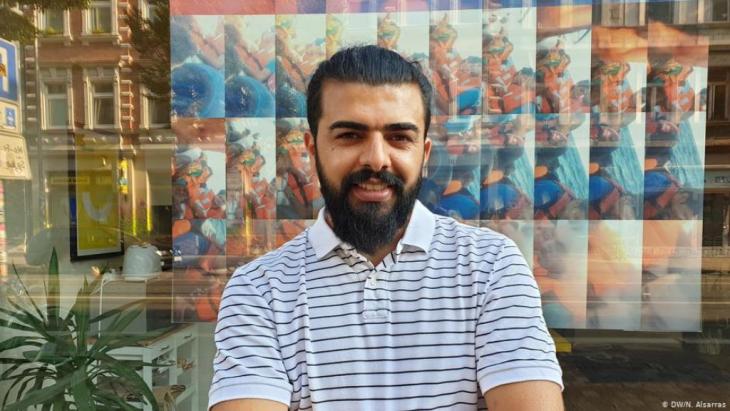 When hundreds of thousands of refugees crossed Germany's borders in 2015, Chancellor Angela Merkel promised: "We can do it!" This is the story of how Iraqi refugee Raisan Hameed became a successful photography student. By Nader Alsarras

When you meet Raisan Hameed now, you can hardly believe it: the quiet young man, who had his first day as a student at the University of Graphics and Book Art (HGB) in Leipzig in October 2016, stands in the lively Eisenbahnstraße in Leipzig, speaking to a small crowd about his work, which is hanging in a local art gallery.

Visitors listen with interest as the photography student presents two of his pieces in fluent German. DW visited Raisan in Leipzig four years ago. The Iraqi refugee had just been admitted to university. On that day the "Academy for Transcultural Exchange" was opened at the HGB – a special two-year preparatory programme for refugee students ahead of full-time higher education.

The course got underway with a grand opening ceremony. Representatives from politics, the media, and the entire university were present. "I was a bit nervous that day," says Raisan in retrospect. "I'd only been in Germany for a year, could hardly speak German, and we, the newcomers, were the focus. Everyone was looking at us."

Raisan had just been catapulted from the relatively straightforward life at a refugee home into the big world of the renowned art school. Back then, he was in his mid-twenties, and, by his own admission, full of awe. 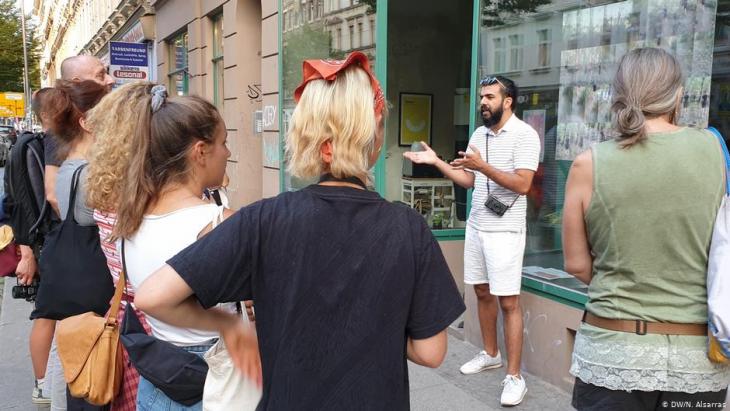 Raisan Hameed on Eisenbahnstraße in Leipzig, speaking to a small crowd about his work, which is hanging in a local art gallery. When asked whether he feels he has made it in Germany on a personal level, he says "I've come across a difficult path, but I've arrived. I live in a city that has accepted me. The university gave me the opportunity to achieve my dream of continuing to study. Yes, I can say that I made it."

From Mosul to Leipzig

The Iraqi refugee came to Germany in the remarkable late summer of 2015. A year earlier, he and his family had been forced to leave their hometown of Mosul when the Islamic State group conquered the city. At that time, Raisan had studied photography and worked as a photojournalist and cameraman for various media.

He couldn't complete his studies in Mosul. And staying in Iraq was impossible. The armed militias hunted down artists and journalists. "I had to get out of there," he says. "A friend of mine was beaten, another was hanged. It was terrible for me to see my own city burn."

Raisan left Iraq without his family. On an overcrowded boat, he made the dangerous crossing from Turkey to Greece and a few weeks later reached Germany via the so-called Balkan route. He spent his first year at a refugee home in Owschlag, northern Germany. In the beginning, he suffered a lot because he couldn't speak German.

But in little Owschlag, he quickly made friends and met a woman who volunteered to help him settle in and learn the language. "She was like a mother to me. She, her husband, and her children gave me a warm welcome. They even furnished an extra room for me in their house and said, 'If you don't want to sleep in the refugee home, you are welcome to stay with us'."

His host mother accompanied him to the offices, helped him learn German, showed him the country, and also shared his passion for photography. "She understood me as a person and my story, and accepted me as I am."

It was the frequent contact with locals that made it easier for Raisan to settle in and integrate. When he moved southeast to Leipzig, he quickly made friends in his shared apartment. "It was a nice time. We did a lot together." His roommates helped him with homework in German and with writing letters.

He was also able to learn a lot from them about German culture, but in return, he told them about Iraq and its culture. He now lives alone because he needs more space and quiet for his studies, but he has a lot of friends, most of whom are German.

Still, not everyone was so welcoming, says the now 29-year-old. He also endured racist attacks – mostly on public transport – and verbal abuse like "S*** Arabs" or "S*** foreigners."

"Once someone even said 'You black beard!'" he recalls, smiling a little. But he doesn't find it funny. The racist insults "made me very angry and hurt," he says.

But the terrible experiences weren't about to deter him from reaching his goals. He used the two years at the Academy in Leipzig to learn the German language and prepare for further photography studies at the HGB. It wasn't easy to begin with. "I sat in photography classes with other students and had to discuss photos in German. That was difficult. But eventually, it worked out."

In 2018, Raisan completed the preparatory courses and has since been a full-time photography student – and a successful one at that. He regularly takes part in exhibitions. His work has been shown in Leipzig, Berlin, Rotterdam, and even in the Gulf region, in Muscat, Dubai, and Sharjah.

But Raisan is particularly happy about his participation in an exhibition in the Art and Exhibition Hall of the Federal Republic of Germany – the Bundeskunsthalle – in Bonn. His eyes shine when he says that his work is now on display in a "really big museum."

A central motif in his pictures is his traumatic experience of escape: "I try to process my experiences in order to get rid of them so that they no longer burden me." He also wants to fight racism and "open people's eyes to something they have never seen themselves." 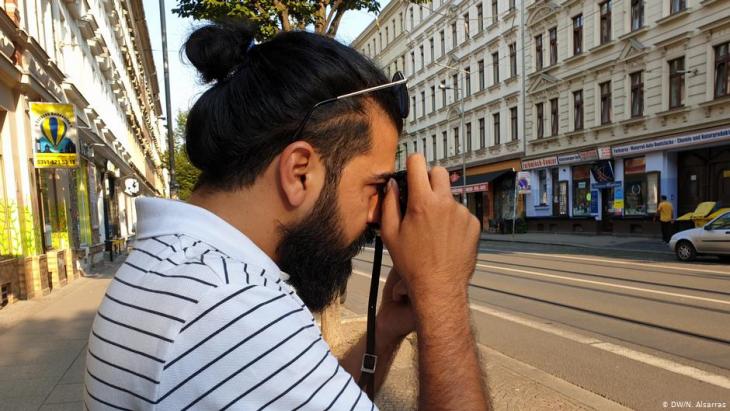 Hameed, who was born in Mosul in Iraq, has met many welcoming Germans, but also been on the receiving end of verbal abuse. Overall, however, he says that many people have helped him on his path so far. He says: "Germany gave me something. I want to give something back at some point."

Five years have passed since Raisan arrived in Germany. Has he made it?

He ponders his answer for a long time. No, as an artist he hasn't quite made it yet, he says. He still hasn't had his breakthrough, the big hit that attracts a lot of attention.

And on a personal level?

Five years is a long time, Raisan says. He has experienced many beautiful, but also unpleasant things. "I've come across a difficult path, but I've arrived. I live in a city that has accepted me. The university gave me the opportunity to achieve my dream of continuing to study. Yes, I can say that I made it."

But the photography student isn't about to rest on his laurels. In a year he wants to finish his studies so he can finally get started internationally. As a photographer, he wants to be able to travel a lot. Quite often, however, he's denied opportunities because his Iraqi citizenship and refugee status often mean he is refused a visa.

What pains him most is the long separation from his parents, who stayed in Iraq. He hasn't seen them in half a decade. He especially misses his hometown, Mosul, where as a young man he taught himself to take photos in the alleys of the old town.

But he's optimistic and is determined to be successful. Failure, it seems, is not an option for him. Many people have helped him on his path so far, he says. "Germany gave me something. I want to give something back at some point."

The Hanau terror attack showed just how dangerous racist conspiracy theories can be. And yet it is a threat that continues to be underestimated. Commentary by Daniel Bax END_OF_DOCUMENT_TOKEN_TO_BE_REPLACED

How can we truly appreciate the richness of cultures not our own? In her recent book "What is Islamic art? Between religion and perception", art historian Wendy Shaw explains the ... END_OF_DOCUMENT_TOKEN_TO_BE_REPLACED

In his controversial book published in 2020, French author Pascal Bruckner describes anti-Muslim sentiment as a fiction, claiming that the term "Islamophobia" is being used to ... END_OF_DOCUMENT_TOKEN_TO_BE_REPLACED

Islam scholar and social anthropologist Marie-Christine Heinze is head of an academic exchange project with the University of Sanaa on "Post-conflict Reconstruction in Yemen". In ... END_OF_DOCUMENT_TOKEN_TO_BE_REPLACED

Several media reports in recent weeks have focused on the potential threat presented by Islamist groups in Germany. The discourse is fraught with generalisations, both sides ... END_OF_DOCUMENT_TOKEN_TO_BE_REPLACED
Author:
Nader Alsarras
Date:
Mail:
Send via mail

END_OF_DOCUMENT_TOKEN_TO_BE_REPLACED
Social media
and networks
Subscribe to our
newsletter