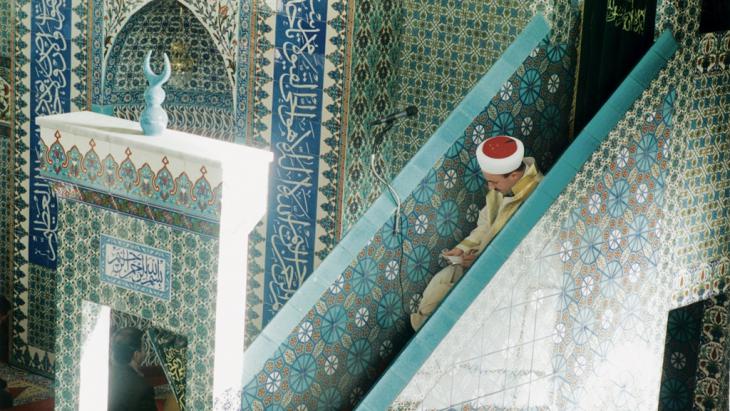 Refugees in Germany
Mosques: a gateway to integration

The many Muslim refugees currently arriving in Germany are a challenge for the country′s mosques. Not merely in terms of humanitarian aid, but in terms of how German Islam is likely to change and develop as a result. By Andreas Gorzewski

Islam in Germany could become much more multifaceted as new residents arrive in large numbers from mostly Muslim countries. Until recently, Turkish-influenced Islam was the dominant practice, with two-thirds of the estimated 4 million Muslims in Germany having Turkish roots. The numbers of Arabs, Bosnians, Albanians and migrants from other mostly Muslim countries have been much smaller. But, month after month, tens of thousands of Syrians and Iraqis are arriving in Germany.

Integration authorities have called on mosques to take an active role in assisting newly arrived Muslims and Islamic associations in Germany appear keen to meet the challenge. Aiman Mazyek, the head of Germany′s Central Council for Muslims, told the public broadcaster ZDF that mosque communities could take on a "key role" when it comes to integration.

Germany currently has some 2,400 mosques, most of which belong to Turkish organisations. For Syrian or Iraqi Sunnis, praying toward Mecca behind a Turkish imam is no problem. The language of prayer in mosques all over the world is Arabic. The problems start when it comes to the Friday sermon, which is given in the congregation′s language. And that is mainly Turkish.

Arabic is mainly spoken in the Moroccan mosques. Abdelkader Rafoud of the Central Council of Moroccans in Germany estimates that there are approximately 155 nationwide. Newly arrived refugees are quick to find the whereabouts of the nearest Arabic-speaking community. This means Arabic-speaking refugees can understand both the prayers and the sermons.

The men may meet and converse in the tearooms that are a feature of almost every mosque in Germany. The women have other places to meet. Language problems can also arise, with various Arabic dialects spoken in North Africa and the Middle East. Ahmad Aweimer, spokesman for the Muslim community in Dortmund, doesn′t see that as a huge barrier, however, as most people can make themselves understood in Modern Standard Arabic.

It′s still not clear whether the conflicts from migrants′ countries of origin will carry over to German mosques. There are Sunnis, Shias, Syrian Alawites and other Muslim communities among the refugees. There are Arabs, Kurds, Afghans and members of many more ethnicities. 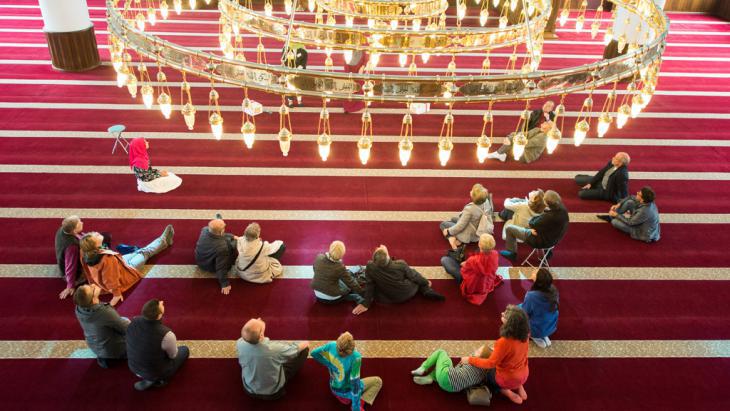 Turkish versus Arabic: Germany currently has some 2,400 mosques, most of which belong to Turkish organisations. For Syrian or Iraqi Sunnis, praying toward Mecca behind a Turkish imam is no problem

And their presence in Germany′s mosques is only now becoming noticeable, Rafoud said. Conflicts such as those recently reported in refugee accommodation centres are certainly possible. But Rafoud said he does not think that these will play out in the mosques themselves. As to how these new groups will mix and integrate with the existing Muslim community remains to be seen, however. "We have yet to be confronted with the differences," admitted Rafoud.

Thirty years ago, Moroccans did not have their own mosques in Germany; there were almost exclusively Turkish mosques. "The Turkish communities took us in," Rafoud said. It took a while for Moroccan Muslims to gather the money to establish their own mosques. He said it would be the same now for Syrians and Iraqis. However, linguistic and sectarian similarities don′t necessarily mean that Syrians and Iraqis will feel at home in German-Moroccan organisations. "People who have lived here for years are influenced by the local culture," said Rafoud. He said many who have attended Moroccan mosques for years have found their own way to combine religion with everyday life in Germany.

Some mosques have been offering German language and integration courses for years now. But the funds available to them are limited. Recently, Salafist groups, which often promote an extremist interpretation of Islam, have also gotten involved - a development that has worried German domestic security experts. There is even greater support now for Islamic organisations that can be trusted to play bridge-building roles to German society. And the emphasis is often on members of the relevant organisation or congregation, who often speak better German than the imams.

"They are more or less German," Dortmund′s Aweimer said of Muslims who have grown up in or lived in the country for a long time. He added that contact with local mosques represented a real opportunity for newly arrived Muslims. "They have to adjust to the values that we in this society share," he said. In past decades, integration took too long, he added, "The people who are coming now have role models in the mosques. I think they′ll have a much easier time than my generation had."

Award-winning poet Dincer Gucyeter’s debut novel is a tour de force through the German reality he experienced as an artist and son of Turkish immigrants, written with an unsparing ... END_OF_DOCUMENT_TOKEN_TO_BE_REPLACED

Sudanese protesters have been calling for the removal of German diplomat Volker Perthes from the UN mission to the country. Despite the fractious nature of post-dictatorship ... END_OF_DOCUMENT_TOKEN_TO_BE_REPLACED

We are in favour of human rights. But One Love armbands are self-righteous and ignore some fundamental issues. Stefan Buchen examines the debate surrounding the World Cup in Qatar END_OF_DOCUMENT_TOKEN_TO_BE_REPLACED

Education for girls and women is still possible in Afghanistan, says Reinhard Eroes of the Kinderhilfe Afghanistan initiative. In interview with Elisa Rheinheimer, he talks about ... END_OF_DOCUMENT_TOKEN_TO_BE_REPLACED

In Doha, Arabs from Morocco, Tunisia, Egypt and Algeria are gathering to celebrate the first ever FIFA World Cup to be held on Arab soil. The criticism from Europe? Over the top, ... END_OF_DOCUMENT_TOKEN_TO_BE_REPLACED

Canan Topcu came from Turkey to Germany as a child. In her essay, she describes how bothered she was by the racism she encountered in her country of origin when she travelled ... END_OF_DOCUMENT_TOKEN_TO_BE_REPLACED
Author:
Andreas Gorzewski
Date:
Mail:
Send via mail

END_OF_DOCUMENT_TOKEN_TO_BE_REPLACED
Social media
and networks
Subscribe to our
newsletter