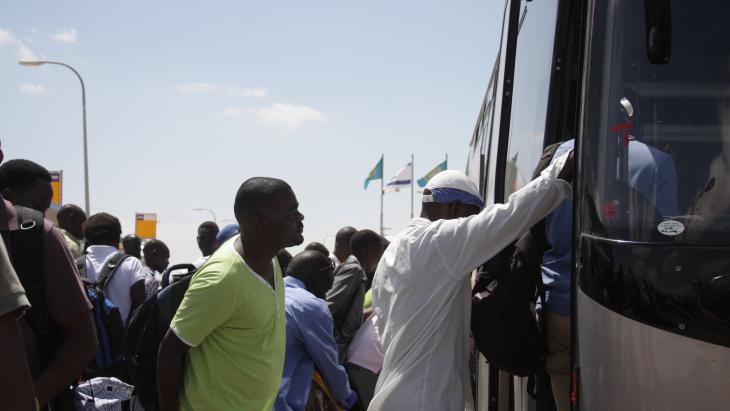 Holot, Israel′s desert detention centre, recently released 1,200 asylum seekers. With the state dragging its feet over the processing of asylum applications, however, thousands more are likely to receive a summons. By Ylenia Gostoli

At the end of last month, 1,200 asylum seekers were released from Holot, an ′open′ detention centre in the middle of the Naqab (Negev) desert, which began operating in December 2013. But thousands of others are now eligible to be summoned to the facility, under new and expanded criteria.

The move follows a decision by Israel′s Supreme Court to limit the time that asylum seekers can be detained in Holot to a maximum of twelve months. Every male refugee without a family in Israel is now eligible for detention. According to activists, hundreds have already been asked to report to Holot for their hearing. An estimated 42,000 – mostly Sudanese and Eritrean – refugees currently reside in Israel. The Israeli government refers to them as ″infiltrators″ and in 2013, built a $400 million fence along its border with Egypt with the main purpose of preventing their entry.

No place to go

Outside Holot on the day of the detainees′ release, 28-year-old Nor Tok from Darfur, Sudan, wondered what to do next. Before his 18-month stint in immigration detention, he had lived and worked in Israel for six years. Dressed in a smart shirt and jeans, he watched hundreds of his fellow detainees board buses to the nearest city, Beersheba. Some of them lingered outside Holot′s barbed wire gates of the desert facility, with no plan, no money and no place to go. 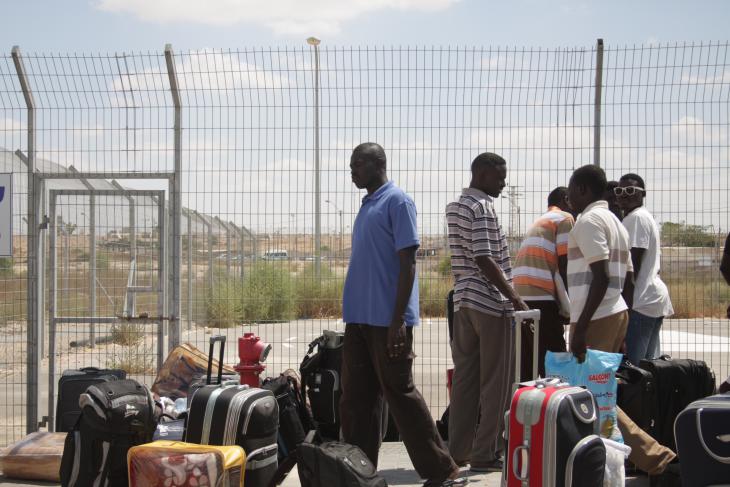 Aimless: under the conditions of their release, refugees have few options

The two-month conditional release visa they received bars them from working and living in two Israeli cities, Tel Aviv and Eilat. Human rights and refugee support groups called on the government to drop the ban, which they say unlawfully limits the refugees′ freedom of movement.

″I have friends in Tel Aviv that could help me, but I′m not allowed to stay there. And I′m broke, ″ Nor Tok said. Detainees can leave Holot during the day, but must report to the facility for a 10 pm roll call and are not allowed to work.

The Sudanese and Eritrean communities have called the neglected neighbourhoods of South Tel Aviv home for nearly a decade. Some used to work in the tourism industry in the Dead Sea city of Eilat.

″The idea of Holot is to break people′s spirit. Make their life miserable, sign and go back, ″ Nor Tok said.

Government deals with Rwanda and Uganda

In Holot, the refugees are presented with the option of signing up for what the government maintains is ″voluntary return″: those who agree are given a one-time stipend of $3,500. The government′s official policy is to send them to a third country. Over the years, the Israeli government has reportedly been striking deals with African countries such as Rwanda and Uganda that included weapons and military training in exchange for its refugees.

But according to recently released figures, under the scheme 4,608 asylum seekers in Israel returned to Sudan, and 1,059 to Eritrea, in violation of the principle of non-refoulement enshrined in the 1951 Refugee Convention, which forbids deportation into an area where their life would be in danger.

Human rights organisations have argued that departure as a result of denial of rights cannot be considered voluntary. They have documented cases where those who were sent to Rwanda or Uganda had been deported back to their countries of origin, or had their travel documents confiscated upon arrival, leaving them with no legal status or rights.

″I learned Hebrew; I would like to study law. But [the government does] whatever it takes to sever us from the community, from the society. And now, after eighteen months here, I have to start all over again, ″ Nor Tok said, visibly distressed by the sound of F-16 military aircrafts flying overhead. Holot is located in a military firing zone.

Two weeks later, Nur Tok had found a job in a factory, having settled in an industrial town not far from Tel Aviv. 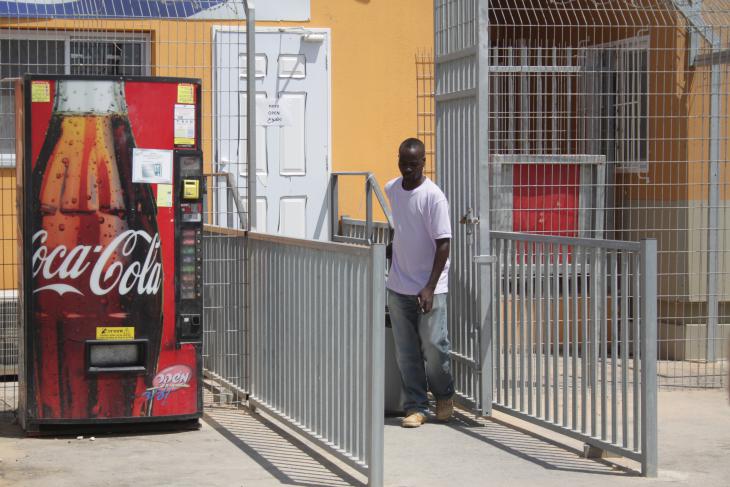 The Holot effect: time spent in the detention centre spells ruin for those who had already established a tenuous foothold in Israeli society

″More and more people will be sent to Holot in the coming months. They are getting people that are working, that are learning, that have medical insurance. They′re being cut from their lives, they will lose everything. It′s a circle, ″ Elisheva Milikovsky, director of the migrant workers and refugees department at the NGO Physicians for Human Rights Israel, told Qantara.de.

″The UNHCR does see Israel as a developed country that could contribute to the asylum process and should take care of refugees, ″ Milikovsky added. ″They are not involved in processing asylum requests and are only monitoring the process and offering resettlement to people who are very sick and can′t get proper care in Israel, or have other humanitarian issues. ″

But Israel only recognised less than one percent of Eritrean and Sudanese refugees. Worldwide, recognition rate is 90 and 67 percent respectively. Sudanese applicants normally do not receive a response to their asylum application. A number of Eritreans were refused on the grounds that Israel does not recognise defecting from the Eritrean army as a valid reason.

″In Eritrea, they wanted me in prison. In Israel, same thing. So far, there has been no change in my life, ″ said Simon, a softly-spoken man in his mid-thirties, for whom national service in Eritrea had meant 10 years working as a teacher in a military academy for a mere $25 a month. By law, national service should last eighteen months, but in practice it can be indefinite.

A June 2015 UN commission of inquiry on Eritrea said that forced labour under the guise of indefinite national service is widespread in the country, together with a string of human rights violations ″on a scope and scale seldom witnessed elsewhere. ″

Simon was summoned to Holot, but did not report and lost his work permit – which must be renewed every one to four months. He now works informally and irregularly as a teacher in Tel Aviv, and volunteers as an English tutor. ″What can I do from Holot? At least here, I can help my community. Our government wants to keep us in the dark: we have no Internet in Eritrea, and our university closed in 2000. Education is the most important thing ... When I come to work, I make a round of the building. But you can′t live this way, always running.″

Home
Print
Newsletter
More on this topic
Israel's crisis politics: On hope and despair in the Middle EastPortrait of the refugee helper Father Zerai: "All these people want is a chance"Book review: "The Bamboo Stalk" by Saud Alsanousi: A life uprooted and replanted
Related Topics
Human rights, Immigration, Policy on refugees and migration, Refugees
All Topics

Blending East African, Bollywood and Arab music traditions, Groupe RTD's "The Dancing Devils of Djibouti" is not only a stunning album, it is also the first internationally- ... END_OF_DOCUMENT_TOKEN_TO_BE_REPLACED

A team of investigative journalists involving the Deutsche Welle have discovered that German weaponry and tech play a far greater role in the Yemen conflict than previously ... END_OF_DOCUMENT_TOKEN_TO_BE_REPLACED

Ethiopia and Eritrea didn't pen their peace agreement in Addis Ababa or Asmara, but in Saudi Arabia with the Emirates alongside. Are economic and military interests increasingly ... END_OF_DOCUMENT_TOKEN_TO_BE_REPLACED

How do authoritarian regimes respond to EU initiatives to stem migration? A recent publication by the German Institute for International and Security Affairs (SWP – Stiftung ... END_OF_DOCUMENT_TOKEN_TO_BE_REPLACED

The EU claims that the migration pact with Africa is a completely new initiative. Rather than reshaping patterns of migration, however, Europe′s desperate politics of symbolism ... END_OF_DOCUMENT_TOKEN_TO_BE_REPLACED

END_OF_DOCUMENT_TOKEN_TO_BE_REPLACED
Social media
and networks
Subscribe to our
newsletter