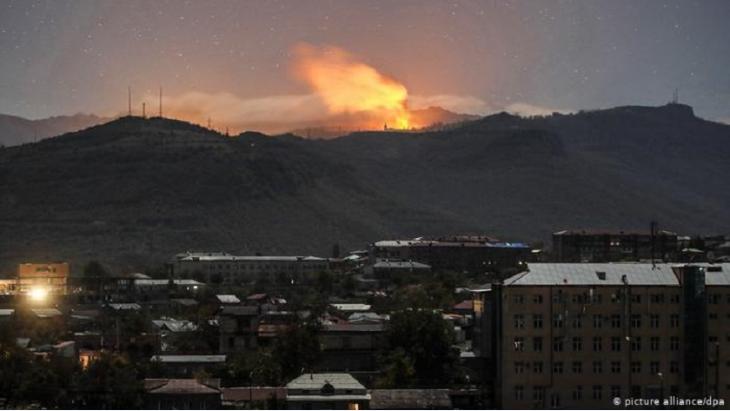 Sensitive to the threat of wider confrontation, Russia and Turkey are for now limiting involvement in the Nagorno-Karabakh conflict to providing humanitarian assistance and some military aid. Maria Tsvetkova and Olzhas Auyezov report

Ankara sees its strong backing for Azerbaijan over the fighting with ethnic Armenians in the mountain enclave as part of efforts to boost Turkey’s international clout. Moscow is determined to defend its own interests in the South Caucasus. But neither wants to be sucked into an all-out war, and private military contractors say Moscow and Ankara are largely turning a blind eye to the role of mercenaries – possibly fighting on both sides – to avoid stoking tensions.

NATO member Turkey, which has stepped up arms supplies to Azerbaijan in recent years, is likely to refrain from deeper military involvement if its ally continues to advance in Nagorno-Karabakh, military and political analysts said. Russia, which has a defence pact with Armenia, also has good relations with Azerbaijan and is unlikely to become directly involved militarily unless Azerbaijan launches a deliberate attack on Armenia, they said.

"The fundamental question is: does the Kremlin want the return of Nagorno-Karabakh to Azerbaijan?" said Pierre Razoux, academic director at France’s Mediterranean Foundation of Strategic Studies.

Thousands are feared killed since fighting flared on 27 September in the breakaway territory, which is internationally recognised as part of Azerbaijan but populated and controlled by ethnic Armenians.

Azeri President Ilham Aliyev said on Sunday his country’s forces had taken Shusha, the second-largest city in Nagorno-Karabakh. Armenian officials denied this, but Turkish President Tayyip Erdogan congratulated his "Azeri brothers" and said he believed Aliyev’s statement was "a sign" that Azerbaijan would soon regain control of more territory.

Turkey’s support for Azerbaijan has been vital, and Azerbaijan’s superior weaponry and battlefield advances have reduced its incentive to reach a lasting peace deal. Ankara denies its troops are involved in fighting but Aliyev has acknowledged some Turkish F-16 fighter jets remained in Azerbaijan after a military drill this summer, and there are reports of Russian and Turkish drones being used by both sides.

Russia is Armenia’s main arms supplier though it also sells weapons to Azerbaijan which, like Armenia, was for decades part of the Soviet Union. Russia has said it will give "all assistance required" should the conflict spill onto "the territory of Armenia".

A Russian private military contractor, speaking to Reuters on condition of anonymity, cited unconfirmed information from a colleague that Russian mercenaries had gone to Nagorno-Karabakh.

Alexander Borodai, a former leader of pro-Russian separatists in eastern Ukraine, said a handful of Russian fighters, mostly of Armenian descent, had gone privately to Nagorno-Karabakh but had not stayed long. "They understood quickly that they wouldn’t be properly used there," he said.

Many Turks are dissatisfied with the international status of their country. At the same time, opinion polls reveal great scepticism among the Turkish population towards the USA. ... END_OF_DOCUMENT_TOKEN_TO_BE_REPLACED

From the Euphrates to the Mekong, dams that ensure one country's water supply risk leaving others parched. But shared water resources can be a source of peace as well as conflict ... END_OF_DOCUMENT_TOKEN_TO_BE_REPLACED

Turkey is turning towards the Turkic nations of Central Asia, intensifying its economic, diplomatic and military relationships with these countries. So what is driving Turkey’s ... END_OF_DOCUMENT_TOKEN_TO_BE_REPLACED

Turkish-Armenian rapprochement kicked off in Moscow in January, after a break of 13 years. This time, focusing on relatively easy fixes such as trade and transportation, both ... END_OF_DOCUMENT_TOKEN_TO_BE_REPLACED

Russia is seeking to shore up the government of Kazakhstan and is sending in the military. For President Putin, there is more at stake than simply his influence in a partner ... END_OF_DOCUMENT_TOKEN_TO_BE_REPLACED

END_OF_DOCUMENT_TOKEN_TO_BE_REPLACED
Social media
and networks
Subscribe to our
newsletter