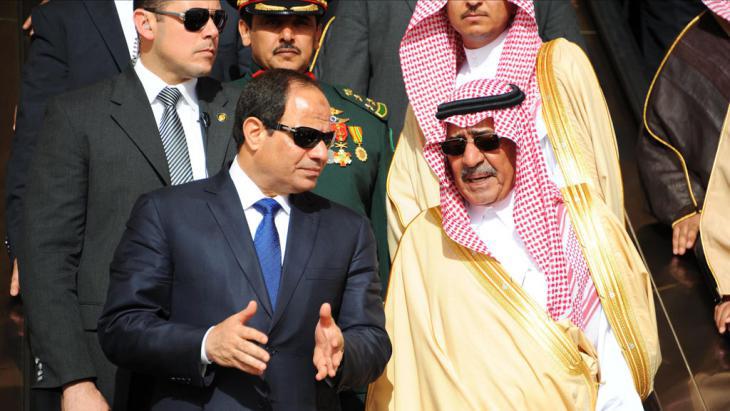 Relations between Saudi Arabia and Egypt

Relations between the Gulf States and Egypt are undergoing readjustment. Saudi Arabia will continue to support Egypt, but the conditions for this support have changed. By Matthias Sailer

Until just recently, the basic position of the rich Gulf states with respect to Egypt was quite clear: the military regime of Abdul Fattah al-Sisi had the virtually unconditional support of Saudi Arabia, the United Arab Emirates (UAE) and Kuwait. Qatar, by contrast, remained on the side of the Egyptian Muslim Brotherhood and the democratically elected President Mohammed Morsi, who was deposed and arrested by the military in July 2013. The three supporting countries – above all Saudi Arabia and the UAE – have provided Egypt with at least US$23 billion in the form of aid payments, loans and fuel deliveries since the Egyptian military took over the reigns of power.

This is why an interview conducted last February with the long-serving Saudi Foreign Minister Saud bin Faisal made people prick up their ears: "We have no problem with the Muslim Brotherhood," he said. "Our problem is with a small group that is linked to this organisation." This comment is noteworthy because as recently as early 2014, Saudi Arabia declared the Muslim Brotherhood to be a terrorist organisation. In doing so, it was singing from the same hymn sheet as the Egyptian government. What has happened to bring about this change, and what does this readjustment mean for Egypt's military regime, which remains financially dependent on aid from the Gulf states?

There were three main reasons for the hostile attitude of the Saudi regime towards the Egyptian Muslim Brotherhood.

First of all, the conflict had ideological components: the Wahhabism propagated by the Saudi royal family strictly limits any criticism of the country's rulers by the people. By contrast, the ideology of the Egyptian Muslim Brotherhood explicitly promotes political activism (with the long-term goal of setting up an Islamic state). The fear of the Saudi royal family was that the rise of the Muslim Brotherhood in Egypt could inspire opposition forces in Saudi Arabia to adopt similar activism and rise up against the regime.

Secondly, the Saudis felt that Egypt's stability has been in jeopardy since late 2012, when there was an increase in polarisation between Morsi's supporters and his opponents.

A third perceived threat was the – albeit quite tentative – rapprochement between Mohammed Morsi and Saudi Arabia's arch-rival, Iran. 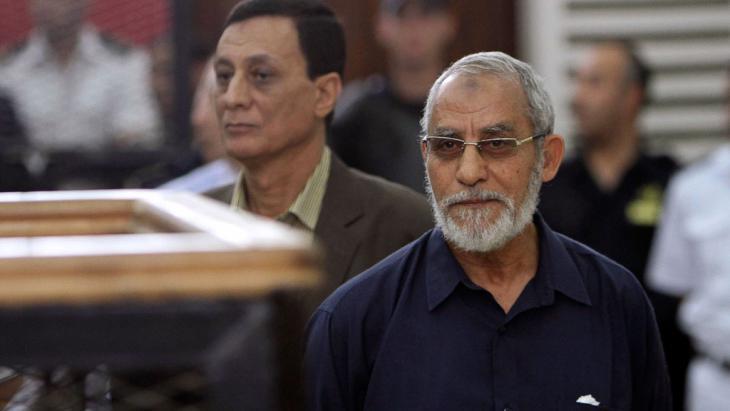 Situation in Egypt has changed dramatically

However, the situation in Egypt has radically altered since 2013. The Egyptian Muslim Brotherhood has been severely weakened and has lost a great deal of its popularity as a result of large-scale suppression by the Sisi administration. This means that any danger of the Saudi opposition being "infected" by the Muslim Brotherhood is extremely small at the moment.

With respect to the second threat, a destabilisation of Egypt, the Saudis do not feel that the overthrow of Mohammed Morsi has resulted in a success. On the contrary, politically motivated violence against the Sisi regime has grown considerably.

As for the third threat, relations with Iran, Egypt is acting in compliance with the interests of Saudi Arabia. There have been no moves towards a rapprochement with Iran.

With the rise of IS in Iraq and the disintegration of Yemen, Saudi Arabia is currently faced with new threats directly on its borders. The takeover of Yemen by the Houthis, who enjoy the support of arch-rival Iran, has led to a further expansion of the Iranian sphere of influence. In addition to Iraq, Syria and Lebanon, Iran is now exercising a powerful influence in Yemen. As a result, the Saudis are even more nervous about the active American role in negotiations about Iran's nuclear programme. An agreement between Iran and the USA is not in the interest of Saudi Arabia.

It is therefore understandable that the Saudi regime is currently giving much greater priority to the acute threat on its borders and to Iran's growing influence than to the much weakened Muslim Brotherhood in Egypt. Of course, these events do not change the fact that Saudi Arabia still regards the brotherhood as a threat. Nevertheless, the Saudis' greatest concern in this respect is likely to be the increase in political violence and the associated disastrous economic situation in Egypt. 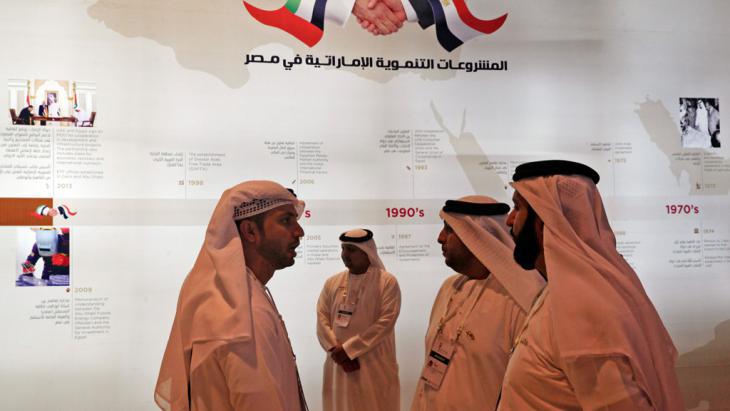 A financial boost for Egypt's crippled economy: at the start of the Egypt Economic Development Conference EEDC in Sharm el-Sheikh this month, Saudi Arabia, the UAE and Kuwait each pledged US$ 4 billion to Egypt in investment and aid

The role of Turkey and Qatar

These changes in Saudi Arabia's perception of the threats it faces have direct consequences for Egypt. In order to deal with its new priorities, Saudi Arabia is attempting to assemble as many allies in the region as possible. This already led to a bid by the late Saudi King Abdullah, who died in January, to begin warming up relations with Qatar, an arch-enemy of the Sisi administration. The same is true of Turkey, which maintains a hostile position similar to that of Qatar towards the military regime in Egypt. The Saudis are now also seeking rapprochement with Turkey.

This means that Egypt has to tone down its aggressive rhetoric towards Qatar and Turkey in order to ensure continued generous financial support from Saudi Arabia. Egypt experienced a foretaste of this new reality last February, when the Egyptian ambassador to the Arab League accused Qatar of supporting terrorism. Shortly afterwards, a sharply worded rebuke of the accusations was posted on the website of the organisation. This rebuke was issued in the name of the Secretary General of the Gulf Cooperation Council, which, in addition to Qatar, also includes Saudi Arabia, the UAE and Kuwait as members. Subsequently, the statement was removed from the website and replaced with a text sympathetic to Egypt. The background to these actions remains unclear, but the episode does show that the attitudes of member states in the Gulf Cooperation Council towards Egypt are currently in a state of flux.

With the change of power in Saudi Arabia, pressure is also mounting on Egypt at a personal level. Recent press reports have conveyed the impression that the chemistry between the new leadership in Saudi Arabia and that in Qatar has measurably improved. By contrast, personal relations between Abdul Fattah al-Sisi and the Saudi leadership are now rather subdued. In February, secretly taped recordings of conversations between Sisi and his former chief of staff were published, demonstrating the men's contempt and disdain for the Gulf states. Even though Egypt claims that the tapes are not authentic, there are many indications to the contrary. In any case, the new Saudi leadership is likely to have been seriously displeased with the content.

Saudi Arabia will continue to support the Egyptian military regime in accordance with its own interests. Sisi, however, must learn to live with the fact that relations with Qatar and with Turkey have grown in importance to the Saudis. There is also greater pressure on Egypt to stabilise the country. Should Sisi prove unable to deliver, Riyadh could demand that the generals alter their strategy and, perhaps, even insist on a decrease in the repression of the Muslim Brotherhood.

The Egyptian series "El-Ekhteyar 2" was created by a production company with close ties to the military – and pursues a corresponding narrative. Moritz Baumstieger explains how ... END_OF_DOCUMENT_TOKEN_TO_BE_REPLACED

Looking to mobilise the Egyptians, Abdul Fattah al-Sisi and his ministers will refer to them as the "people". As soon as the Egyptians demand something of the state, however, they ... END_OF_DOCUMENT_TOKEN_TO_BE_REPLACED

The rollout of coronavirus vaccines in the Middle East and North Africa is already taking place on a massive scale, with the United Arab Emirates leading the way. Nevertheless, ... END_OF_DOCUMENT_TOKEN_TO_BE_REPLACED

Egyptian singer Umm Kulthum continuous to be an icon, almost 100 years after she published her first record. But what about the other famous women of the 1920s? In his new book, ... END_OF_DOCUMENT_TOKEN_TO_BE_REPLACED

The Prophet Muhammad never executed anyone for apostasy, nor encouraged his followers to do so. Nor is criminalising sacrilege based on Islam’s main sacred text, the Koran. In ... END_OF_DOCUMENT_TOKEN_TO_BE_REPLACED

Archaeologists have uncovered the remains of an ancient city in the desert outside Luxor in Egypt. They say it dates back to the golden age of the Pharaohs more than 3,000 years ... END_OF_DOCUMENT_TOKEN_TO_BE_REPLACED
Author:
Matthias Sailer
Date:
Mail:
Send via mail

END_OF_DOCUMENT_TOKEN_TO_BE_REPLACED
Social media
and networks
Subscribe to our
newsletter