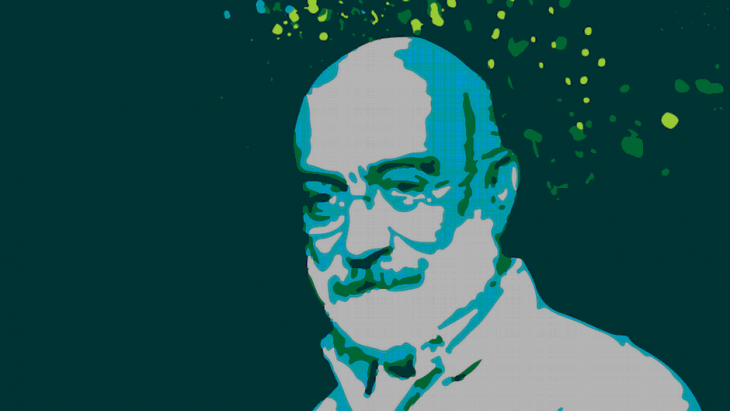 Turkish author Ahmet Altan and the power of words

The Turkish writer and journalist Ahmet Altan was imprisoned for three years and four months. He had always been outspoken and he remained outspoken in prison, where he wrote a collection of essays and a novel. He has now been awarded the Geschwister-Scholl-Preis for his tireless dedication. By Gerrit Wustmann

Abdulhamid II, the last sultan prior to the break-up of the Ottoman Empire, was heralded as a reformer when he took the throne, but became a decadent, paranoid despot who imagined plotters in every corner, had his spies trained on everything and everyone, and was firmly in the grip of his own control-freakery. He rebuilt the state and its administration, ensuring that all the reins were in his hands. His enormous nose made him a target for caricaturists, who put about that his nose was a sight to behold. When he sensed an attempted coup, he struck out mercilessly at those around him.

“The great waves of arrests which took place the following morning saw a number of pashas and hundreds of lower-ranking officers taken from their homes and placed in Balmumcu military barracks. (…) And fear, which lurked in Istanbul like an ogre raising its head above the ground from time to time, spread like a plague. Civilians were denounced and arrested too. Anyone could report on their enemies by claiming they were in the service of Fuat Pasha.”

Replace Fuat Pasha with Fethullah Gulen, Abdulhamid II with President Recep Tayyip Erdogan and the passage above reads very much like a newspaper article from the summer of 2016, when a failed coup attempt moved to bring down the Turkish government. But this text is not from 2016; it is from 1998 and it is not from a history book, but Ahmet Altan’s novel Like a Sword Wound (translated into English by Brendan Freely and Yelda Turedi, Europa Editions 2018).

A victim of the countercoup

Together with his brother Mehmet Altan and the journalist Nazli Ilicak, Altan was arrested just days after that fateful night of the 15th of July in the course of nationwide raids against the government’s opponents. Taraf, the daily newspaper founded by Altan, was also banned. He was accused of supporting those orchestrating the coup because he had dared to criticise the governing AKP and President Erdogan on a television programme broadcast the day before the coup. Altan is just one of tens of thousands of people to have fallen victim to this countercoup; to date, more than a hundred journalists have been imprisoned – more than in any other country worldwide.

In an essay, Altan recalls the parallels between his sentence and that of the protagonist in Like a Sword Wound. Like his protagonist, he sits restless in the examination room and waits for the judgement; words like ‘future’ and ‘fate’ disintegrate, his old life collapses in on itself. “My life’s aping my novel!” Altan writes in I will never see the world again. The Memoir of an Imprisoned Writer (translated into English by Yasemin Congar, Granta 2018).

The judgement for Altan ordered difficult conditions for life. This meant solitary confinement. In a high-security prison in Silivri near Istanbul. This prison, it was claimed, could produce the best newspaper in the country, because the most important journalists and intellectuals in Turkey were confined there. Can Dundar was imprisoned here, as was Deniz Yucel. And the judgement against Altan was announced on the same day that Yucel was set free, which once again highlighted that lawful judgements were no longer being made here; these were political statements. Meanwhile, Altan was cleared of his conviction by the Supreme Court of Appeals Penal Chamber, which has recently dared to stand against the will of the presidential palace. But the criminal court in Istanbul intervened, opened new proceedings and Altan was initially obliged to remain behind bars.

This November, Ahmet Altan will receive the Geschwister-Scholl-Preis for his essay collection. “This politically-motivated sentence robbed one of Turkey’s critical commentator of his freedom,” the jury explained in its justification for awarding Altan the prize. “In a situation where his freedom had been taken from him, Ahmet Altan asserts his inner freedom in a moving, courageous way. The texts, written in dialogue with world literature, document his resistance and intellectual independence.” Ultimately, literature shows itself to be stronger than any arbitrary form of justice. 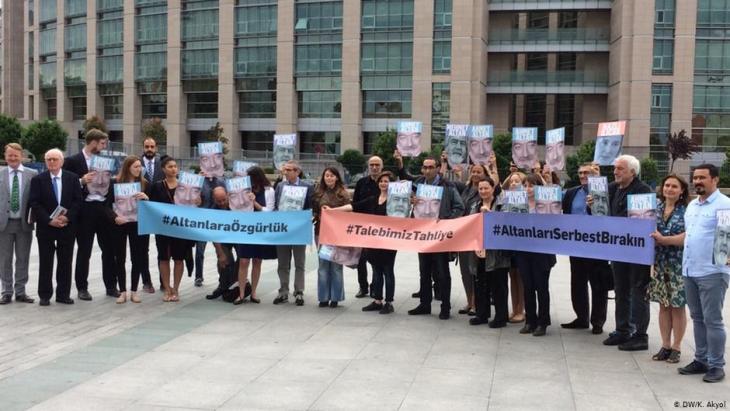 Protesting arbitrary justice and draconian prison sentences: in February 2018 Ahmet Altan, his brother Mehmet Altan and the journalist Nazli Ilicak were sentenced to life imprisonment for alleged membership of the Gulen movement. They were accused of having supported the attempted coup in July 2016, for which Ankara holds the Gulen movement responsible. After more than three years in prison, a Turkish court has now ordered the release of Ahmet Altan and Nazli Ilicak. Mehmet Altan was released from prison in June 2018 and acquitted in July of this year

The proceedings against Altan and many others fulfilled their purpose in one way: they gave rise to fear and self-censorship amid those who were still free. But they also showed, as Altan bears out in his texts, that you can lock up an author, but you cannot lock up their words and their works. On the contrary, Altan’s work is receiving more attention than ever before. And every act of violence from the Turkish government confirms what they say.

Since then - he explained to the British Observer newspaper by means of messages smuggled out of the prison - he has written a new novel. This new work, Lady Life, is “a comedy which plays out against the backdrop of repression and political upheaval in modern-day Istanbul; the story of a woman who doesn’t take life too seriously”.

“I can walk through walls, effortlessly”

The novel is soon to be published in English and we can only hope that others of the eight novels which Altan has published since 1982 will find their way to us one day. For now, it’s unlikely that Lady Life will be published in Turkey. I will never see the world again is also not in print in Turkey. All of Altan’s other books reside in the prison library in Silivri. Any prisoner is able to take them out. Only Altan himself is forbidden from doing so. He has yet to discover why.

“I write these lines from a prison cell,” Altan writes towards the end of his essay collection. “But I am not trapped. I am a writer. I am no more present where I am, than where I am not. You can put me in prison, but you cannot contain me. Because I possess a supernatural power unique to all writers. I can walk through walls, effortlessly.”

On Monday 4 November, the news from Istanbul was met with excitement and great relief: the court confirmed a prison term of over ten years, but ordered Altan’s release from prison. After almost three-and-a-half years, he’s seeing the world again – Nazlı Ilıcak was released alongside him. “I did not lose those years,” he said as he was greeted late that evening outside the prison by family and colleagues. “I didn’t let myself lose them. I wrote books.”

Altan is not permitted to leave Istanbul in the near future and is obliged to report to the police regularly. The likelihood of his remaining at relative liberty cannot be certain in view of the arbitrary justice being doled out in Turkey at present. But there’s also a chance that his ban on leaving the country might be lifted, as was the case for Asli Erdogan. Then he might perhaps be able to receive the Geschwister-Scholl-Preis in Munich on 25 November in person. And speak words of freedom.

The USA and NATO plan to withdraw from Afghanistan by September. The operation is risky, the outcome uncertain. Many Afghans fear civil war. The quake on the Hindu Kush will also ... END_OF_DOCUMENT_TOKEN_TO_BE_REPLACED

The neo-Ottomanism propagated by Erdogan has long been more than rhetoric and symbolic politics. This can be seen from recent developments in parts of northern Syria, where Turkey ... END_OF_DOCUMENT_TOKEN_TO_BE_REPLACED

Televised Turkish dramas are all the rage in the Middle East. A young Ottoman TV Empire has been expanding its soft power by harnessing regional dialects, Arabic names and viewers ... END_OF_DOCUMENT_TOKEN_TO_BE_REPLACED

Researchers agree that climate change alone cannot be blamed for the outbreak of war in Syria in 2011. However, neither can it be ignored as a reason this once blossoming country ... END_OF_DOCUMENT_TOKEN_TO_BE_REPLACED

The Sufi Trail is a long-distance hiking route from Istanbul to Konya that seeks to revive the ancient tracks used by foot pilgrims on their way to Mecca. Marian Brehmer spoke to ... END_OF_DOCUMENT_TOKEN_TO_BE_REPLACED
Author:
Gerrit Wustmann
Date:
Mail:
Send via mail

END_OF_DOCUMENT_TOKEN_TO_BE_REPLACED
Social media
and networks
Subscribe to our
newsletter