Azza Karam combines her agenda with a critical look at organised religion. "Today, religion is dominated by men," she says, adding that religious institutions "prioritised men" in their search for solutions and expertise. At the same time, she says. 90 percent of religious work is done by women. "They are the ones who ensure religion survives."

Karam says women have a different style of leadership and always see their responsibilities as part of a service. One example she gives is the widespread admiration for the German chancellor Angela Merkel. "She is a great model for many, many women in the world. And for many men, too." Karam's own desire to see a different style of leadership applies to men and women and aims to make space for a more inclusive and sensitive approach to people and their problems. 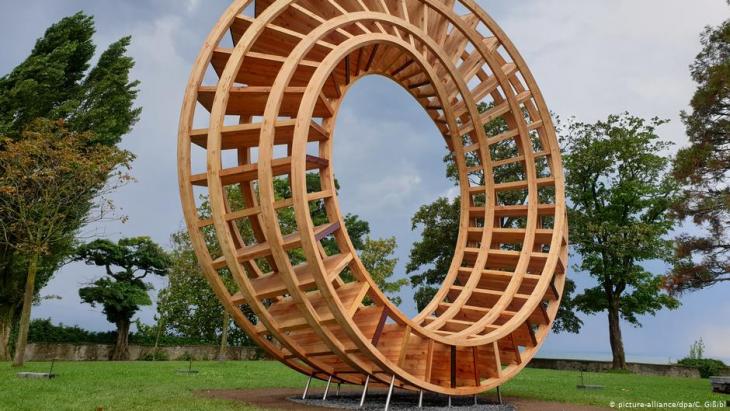 The oversized wooden sculpture "Ring for Peace" is a symbol of the cohesion and unity of the different religions and denominations. "Religions for Peace" unveiled it in 2019 as a permanent symbol of the solidarity of religious confessions in the Inselpark of Lindau. Sikhs and Buddhists, Hindus and Jews, Muslims and Christians of different denominations, as well as representatives of various indigenous traditions came together to share this special moment

The delegates run the gamut of world religions and regions: there are female delegates from the Arab World, a Catholic nun from Nigeria, human rights activists and environmentalists from Cameroon, Zambia and other African countries and elsewhere in the world, such as Asia, the Balkans, or Latin America. There's even a female bishop from Sweden, along with a series of participants who have played a leading role in interreligious dialogue or science. The conference will open with messages from the UN secretary-general Antonio Guterres and the German government.

A large wooden sculpture entitled the "Ring for Peace" (pictured above) will take centre-stage at a small service called "peace and light". The artwork was unveiled last year by RfP in Lindau's main park.

This year's service at the wooden sculpture will be streamed live

The pandemic has affected both the organisation and the theme of the event. Azza Karam: "We are in a moment when we must stand together as people and a family of people and recognise that any threat to the individual is a threat to everyone. At the same time, it's a special moment for diplomacy."

The small East African nation of Djibouti has so far evaded musical discovery by the West. Now, however, the country's official national band, Groupe RTD, is picking up ... END_OF_DOCUMENT_TOKEN_TO_BE_REPLACED

The end of July saw the launch of the African Union’s "Sauti" digital publication, the first young feminist platform in Africa, which this year showcases stories by female youth ... END_OF_DOCUMENT_TOKEN_TO_BE_REPLACED

The outpouring of solidarity worldwide following the violent death of George Floyd should prompt us to step back and fundamentally question racist structures and privileges based ... END_OF_DOCUMENT_TOKEN_TO_BE_REPLACED

Jeddah is very different from other cities on the Arabian Peninsula, says Ulrike Freitag, historian of the Modern Middle East. In her book "A History of Jeddah", she explores the ... END_OF_DOCUMENT_TOKEN_TO_BE_REPLACED

Since the attempted coup in Turkey, President Erdogan has been pressing foreign nations to hand over schools run by the Gulen movement. Although many countries have entrusted ... END_OF_DOCUMENT_TOKEN_TO_BE_REPLACED
Author:
Christoph Strack
Date:
Mail:
Send via mail

END_OF_DOCUMENT_TOKEN_TO_BE_REPLACED
Social media
and networks
Subscribe to our
newsletter