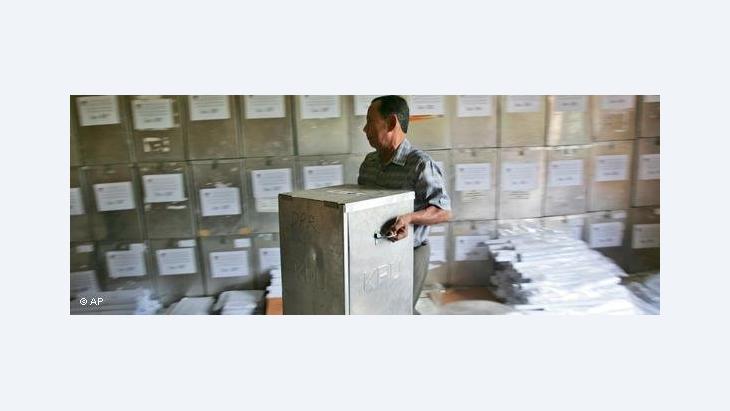 Much Remains to be Done

For Indonesia, May 1998 was an important turning point – much like February 2011 was for Egypt and January 2011 was for Tunisia. At that time, Suharto had been in power for more than 30 years. Thirteen years on, Edith Koesoemawiria reports on the hopes of Indonesian voters

In the wake of the Arab Spring, many Indonesian activists feel the urge to reflect. Thirteen years after General Suharto was forced to step down, comments made by Indonesians on social media websites point to unfulfilled wishes for better social and economic conditions for the people, to unsolved human rights cases from the Suharto era and to corruption and a distrust of politics.

As was the case with Egypt's Husni Mubarak recently, Suharto promised new elections before stepping down and promised to abstain from running. However, calls for him to resign did not diminish. The country was hit by the Asian crisis and was struggling economically. Suharto resigned on 21 May 1998 after meeting with several religious and intellectual leaders – Abdurrahman Wahid, Nurcholish Majid and Amien Rais to name a few. He named his vice president, Bacharuddin Jusuf Habibie, his successor.

The first year after Suharto 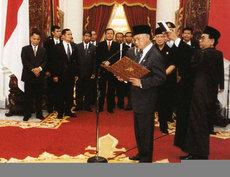 Although Bacharuddin Jusuf Habibie was handpicked by Suharto as his successor, he remained in office for only a year; nevertheless, he is credited with a number of important changes in politics, society and media

​​Habibie, a former minister for technology and Suharto's long-time protégé, had founded the Indonesian Association of Muslim Intellectuals, ICMI, in 1990. Nevertheless, when Habibie was appointed to the top job, several Muslim student groups said he was out of touch with the people, too westernised and too liberal. Others worried about his ties to the old guard or, adversely, about the minimal support from Indonesia's politically influential military. The ICMI did not make much of a difference.

Habibie stayed in office for a year. His presidency actually opened doors to the controversial East Timor referendum, free media and an open political landscape.

Although there were only three parties in Indonesia during Suharto's rule, 48 parties competed in the parliamentary elections of June 1999. A few political parties promoted special interests and minority rights; others proclaimed themselves democratic and nationalistic in a more general sense; 19 parties pro¬moted Islamic ideology.

Golkar was Suharto's party. The two others that had existed under his regime were the United Development Party (PPP) and the Indonesian Democratic Party (PDI). In the first free elections, the opposition was led by three new parties: the Indonesian Democratic Party-Struggle (PDI-P),
the National Mandate Party (PAN) and the National Awakening Party (PKB).

A secular, yet different Indonesia

Election results showed that people wanted change. The PDI-P came in first with more than 35 million votes, while the PKB and the PAN came in fourth and fifth respectively. Golkar came in second. The PPP and the PDI became irrelevant. 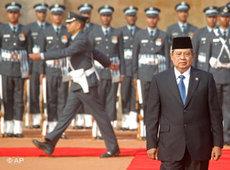 President Susilo Bambang Yudhohono may be a former general and some of his cabinet ministers belonged to Suharto's political party, there is no question that the government is not democratic

​​Indonesia demonstrated its wish to remain a secular country. There are two large Muslim organisations in Indonesia; the PAN and the PKB were each linked to one of them. Nonetheless, they adopted a non-sectarian stance and were open to all members of society. The old PPP, on the other hand, pushed for an orthodox version of Islam. It chose the holy shrine Kaaba as its symbol, hoping to gain votes from conservative and religious circles. This strategy did not work.

Since 1999, Indonesians have tended to vote for secular reform parties. Elections in 2004 and 2009 showed shrinking support for Islamist parties. Occasional violence that radicals perpetrated against minorities did not do these parties any good, and the attack on Bali in 2002 by Al-Qaeda affiliates had a negative effect on them too.

Many Indonesians are frustrated with day-to-day politics. The reasons for their disappointment include in-fighting within the parties and unfulfilled campaign promises. Moreover, people's hope that Indonesia's economic and social conditions would improve immediately were dashed. As a result, they keep looking for fresh alternatives. Politicians provided such alternatives by starting new parties, often drawing people from influential families or the military into their fold.

The currently ruling Democratic Party was founded in 2001. President Susilo Bambang Yudhohono is a former general. Some ministers in his cabinet are from Golkar, but there is no doubt that it is a democratic government.

One Islamist party deserves to be mentioned; it is believed to have ties to Egypt's Muslim Brotherhood. It started as the Justice Party in 1999, but had minimal success in the first elections. In 2002, it changed its name to Prosperous Justice Party (PKS) and maintained that it had abandoned its hardline position. It started to emphasise issues like corruption and clean government.

With this new platform, it multiplied its share of the vote seven fold to eight per cent. Currently, the PKS is demanding a more central role for Islam in public life. It is promoting its cause not only through traditional religious institutions, such as the Indonesian Ulema Council, but also by negotiating for wide-ranging influential positions in the government.

Indonesia's move towards democracy was neither smooth nor totally peaceful. May 1998 saw a surge of student protests in cities across Indonesia. In Jakarta, security forces shot and killed protesters. In several regions there were days of chaos with deadly riots, looting and attacks on minority groups. Many of these crimes were never dealt with before a court. The Indonesian people were very forgiving and allowed many in higher positions of responsibility to get away with a mere apology. 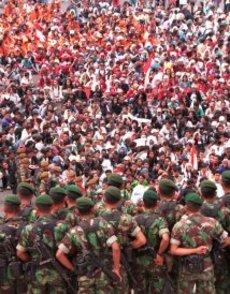 "Indonesians want a change for the better in their lives. For many, it is not enough that Indonesia has a positive political image and has regained its economic standing internationally," writes Edith Koesoemawiria

​​Today, many activists feel Indonesia should have achieved more. Warsito Ellwein, who has published a series of books on political education and works for the Friedrich Naumann Foundation for Liberty, a think tank close to Germany's Free Democrats, feels that Indonesians still need to overcome their fear of politics: "A democracy may often appear chaotic". The point is to allow as many people as possible not only to determine who or which party will govern for a particular term of office, he insists, but also to actively determine the country's policies. "The more people involved, the better the chance that policies remain people friendly."

After years of dictatorship, the idea that politics is bad and dirty has kept people from becoming involved, he says. He travels the country and holds seminars on grassroots politics. Ellwein finds that even those who are active in politics rarely have the soft skills needed: listening to constituents, assessing problems and promoting solutions. Many politicians are impatient, taking dangerous shortcuts like simply buying votes. Others appear to promote violence if they think it serves their cause. Ellwein calls for a code of conduct and stresses the rule of law.

Indonesians want a change for the better in their lives. For many, it is not enough that Indonesia has a positive political image and has regained its economic standing internationally. Indonesians' greatest concern is about their ability to cope with ever-increasing costs of food, transportation and education.

Indonesia is still facing a shortage of jobs and opportunity; public infrastructure seems to be falling apart; corruption is rampant, and discrimination against minority groups is on the rise again. Some people are turning conservative, feeling that if politicians were morally clean, this would solve many problems. Ultimately, they might not care whether a party is secular or Muslim; what matters to them is results.

Edith Koesoemawiria works for the Indonesian service of Radio Deutsche Welle in Bonn.

END_OF_DOCUMENT_TOKEN_TO_BE_REPLACED
Social media
and networks
Subscribe to our
newsletter