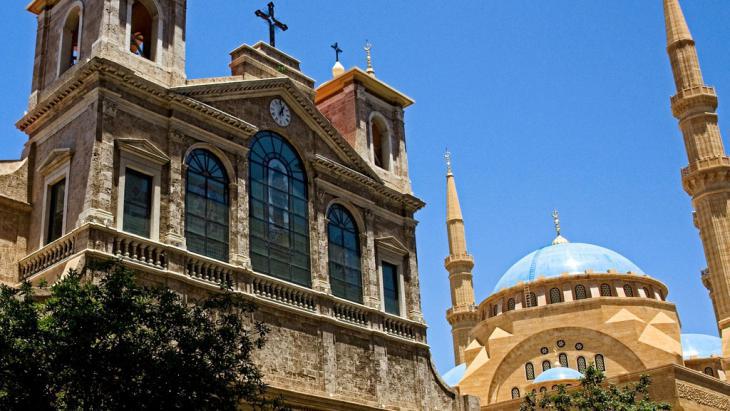 Religious communities in the Middle East
No to sectarianism; yes to equal citizenship!

The author and media commentator Khaled Hroub believes that Christians, Muslims, Jews and followers of other religions can only live peacefully together in the Middle East if people in these countries stop looking at each other in terms of their faith and start treating everyone – without exception – as citizens with equal rights

What Christians in the Arab region do not need from the Muslims who live there is a certificate of good conduct for efforts to stand up to the hateful, sectarian campaigns waged by IS against them and other religious denominations and faiths that would be eradicated by Islamic State's ideology, organisations and supporters.

Nor do they need a "discourse of tolerance", as there is a preconception inherent in this type of discourse that the one being tolerated has committed some kind of sin, whereas the one doing the tolerating has the moral high ground because he displays high-minded tolerance towards that sin.

The only discourse that preserves the dignity of those diverse religious, denominational and ethnic communities is the "discourse of co-existence". In this discourse, everyone is equal and everyone holds that their concerns are equal and important. None of them makes any guarantees or grants anything to another out of "tolerance", but instead through co-existence that is based on respect and equality. All of this happens before the law and in a country founded solely on the principle of citizenship. 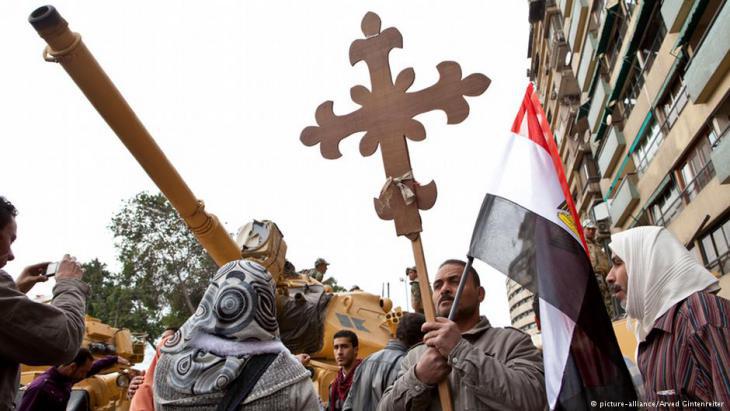 Copts in Egypt. "A discourse of equal citizenship and of belonging to the civil state is the only discourse that will protect the Christians, Muslims and all other constituents of the East, be they religious or secular," writes Khaled Hroub

Christians as the "salt of the Orient"

The Christians of the East have been living in this region and in its countries for over two thousand years – before the advent of Islam, in fact – and they have remained there and fought alongside its people to repel every invasion from overseas, including raids by the crusaders.

Here in the countries of the Middle East, there are hundreds of families who have been here for a very long time and are spread over a large area. Their names do not reveal the religion to which they belong; they may be Christian or Muslim. Some of them have chosen to remain Christian; others have converted to Islam. Whatever the choice, these families hold together, right to the present day, through all hardship. Yes, people differed in their religion, but still they remained, recognising each other as distinct communities.

But things have not always been rosy throughout history; there have been periods of fanaticism and racism in the region. However, civil society has, for the most part, been characterised by moderation and co-existence. And while it is true that the Christians of the East have become a minority, this should not detract from their historical significance, nor from their right of belonging, which is something that no one can bestow upon them. Whenever some minority is in need of "tolerance" and "compassion" from the majority, things get very murky and perilous. And when the minority starts to feel that it is in danger simply because it is different from the majority, the real rot begins to set in.

News that comes in from here and there about conferences being held and initiatives undertaken to defend the Christians of the East arouses contradictory feelings, especially when these initiatives originate outside the Arab region.

On the one hand, no one can dismiss all of the efforts made by people who are in part, at least, well intentioned and have no hidden agendas. But on the other, there is much hypocrisy and political instrumentalisation, all of which raises suspicions. These suspicions are justified given the bitter historical experience with the West, be it Europe or America. Rather than dragging us down into repudiation of these efforts and stirring up conspiracy theories left and right, this sort of thing should drive us to rebuild roads and knock firmly on the doors of our sleeping consciousness so that we take responsibility for one another, not leaving it for others to do. 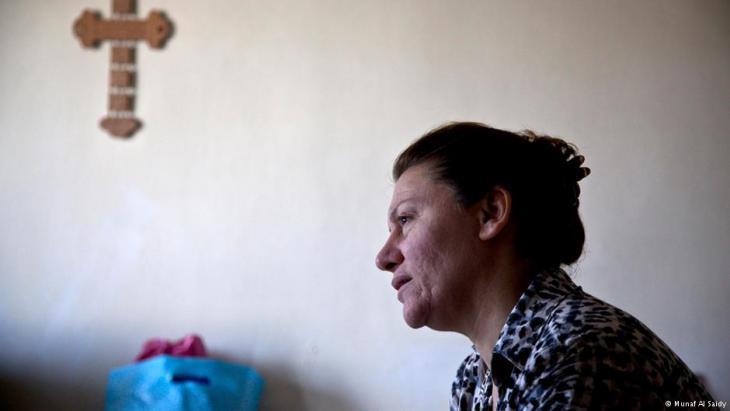 An Iraqi Christian in Beirut. Khaled Hroub feels that the idea of establishing a "coalition of the minorities" as suggested by the Syrian government and its allies, is not productive because it "exacerbates the issue of sectarian entrenchment" and "rather than everyone taking responsibility for the defence of Christians, and any other group that deserves to be defended, the task in hand is being redrawn along religious lines"

Rejecting the idea of a "coalition of the minorities"

In this vein, it is worth noting that the Christian majority in Lebanon in particular, and in the East in general, along with its community and religious leaders, has rejected the idea of establishing a "coalition of the minorities", which is what the Syrian regime and its allies have called for. Such an idea exacerbates the issue of sectarian entrenchment and is incompatible with the universality of citizenship. It takes the conflict to new and terrible levels. So rather than everyone taking responsibility for the defence of Christians, and any other group that deserves to be defended, the task in hand is being redrawn along religious lines.

Taking societal responsibility means that our Christians can live in safety and dignity. It is the same thing dreamed of by our Muslims and by each and every one of us in this part of the world. We, the people of this region, bear full responsibility, much more than any outside party. This responsibility should not become diluted through public discourse and bombast. It begins with normal people: individuals in the cities, countryside and villages. Only then does it shift to civil society groups, organisations and opinion formers.

Finally, governments bear responsibility for our minorities, even though they have all failed to do so at national level. Laying the blame on governments and official bodies until they take responsibility – as they should – for religious and national sectarianism is nothing more than a flight-forward reaction. A significant number of these governments and regimes are themselves founded principally along sectarian lines; it therefore makes no sense for them to do what is antithetical to their very structure and origins.

Once again, what we do not need here in assuming this responsibility is a discourse of tolerance and magnanimity towards Christians, as if they were children in need of protection and care. The Arab world needs a new, collective and coherent discourse, whether we are talking about the Christians of the East or the many groups in Arab society that vary in terms of ethnicity and denomination; a discourse based on the very structure and foundation of the East, a discourse of peaceful co-existence.

Christians, Muslims, Arab Jews, Yazidis, and all manner of religions cannot co-exist on any foundation other than equal citizenship, one that does not discriminate between individuals on account of their religion or belief, but is committed to them on terms of equality and justice, on account of them being fully eligible citizens before the law and the constitution.

A discourse of equal citizenship and of belonging to the civil state is the only discourse that will protect the Christians, Muslims and all others in the East, be they religious or secular. It will preserve their humanity and equality with one another. Any other discourse would weaken this religious denomination or that ethnic minority, and would reinstate one sectarian view or another, be it religious or racial in nature.

Translated from the Arabic by Lindsay Munford

Home
Print
Newsletter
More on this topic
Interfaith dialogue in Palestine: Reviving a heritage of peaceful co-existenceArabs and Jews in Israel: You can't tear us apartOn Raif Badawi, Charlie Hebdo and non-violent Islamism: "We are all in this together, like it or not"Interview with Hazem Saghieh: Beyond the authority of religion and the rule of family clans
Related Topics
Arab Spring, Arabellion, Christians in the Islamic world, Democracy and civil society, Freedom of religion, History of the Near and Middle East, Human rights, Jews in the Islamic world, Minorities in the Muslim world, Multiculturalism
All Topics

Abortions are illegal in Egypt unless they are necessary to save a married woman's life. But that doesn't stop local women from having one. Egyptian society needs to acknowledge ... END_OF_DOCUMENT_TOKEN_TO_BE_REPLACED

Food prices doubled, salaries halved, banks restricting withdrawals: Egyptians now have the same problems as the Lebanese. But if things get worse here, the fallout will be far ... END_OF_DOCUMENT_TOKEN_TO_BE_REPLACED

Giessen, Eichsfeld, Kusel, Berlin – cars bearing old German number plates are the latest trend on the streets of Cairo. Many Egyptians regard the discarded plates as chic. What ... END_OF_DOCUMENT_TOKEN_TO_BE_REPLACED

Egyptian Sufis have been on the defensive against the country's Islamists for decades. Meanwhile, interest in mysticism is growing among the young members of Cairo’s middle and ... END_OF_DOCUMENT_TOKEN_TO_BE_REPLACED

Chinese President Xi Jinping's visit to Saudi Arabia in December 2022 may have rattled Washington, but it simply highlighted the Arabs’ desire to diversify their foreign relations ... END_OF_DOCUMENT_TOKEN_TO_BE_REPLACED

END_OF_DOCUMENT_TOKEN_TO_BE_REPLACED
Social media
and networks
Subscribe to our
newsletter