In south-eastern Turkey a neighbourhood dispute over a few hectares of stony ground has escalated into a religious war between the Mor Gabriel Monastery and the surrounding Arab and Kurdish villages. Susannne Güsten has the details 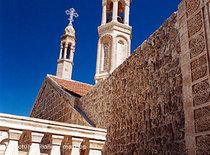 Is it simply about boundary disputes and lack of planning permission, or in fact an attempt to close the monastery, as church representatives contend

​​Chirping swallows can be heard during morning prayer in the chapel of Saint Gabriel. High above the head of a black-bearded monk they swoop back and forth, dive through the round-arched window, out of the sunshine and into the semi-darkness of the chapel, accompanying the monk's sonorous singing with their bright twittering.

Apart from this the Monastery of Saint Gabriel in south-east Anatolia is suffused in calm. In the kitchen the nuns stir semolina for lunch, the bishop broods in his office, in the school room the monastery's pupils are learning the Aramaic alphabet by rote from their teacher, or "Malfone", and the swallows have the monastery's broad courtyards and flights of steps to themselves. In the distance a flock of sheep can be heard bleating, led past along the road leading to Iraq.

This is one of the oldest Christian monasteries in the world, where for over a millennium and a half life has barely changed except that the bishop's secretary now types on a laptop.

At the moment however, the inhabitants however seem to be enjoying the peace and quiet which seems to lie over the monastery and the gentle hills surrounding it. Bishop Timotheos is continually shuffling out of his office to wander round the monastery like a restless ghost, banging doors as he goes.

"Us indigenous Christians are concerned," says Can Gülten the secretary and closes his laptop. And they aren't the only ones. The concern, about an argument over a plot of land in the far corner of Turkey, escalating for more than nine months, extends from the Arab and Kurdish villages within a stone's throw of the monastery, via Ankara, right to the capital cities of Western Europe. 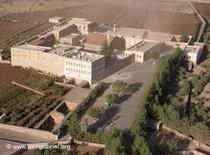 The Syrian Orthodox Mor Gabriel Monastery is one of the oldest Christian monasteries in the world. It is a spiritual centre and a religious home to many Christians within and outside of Turkey

​​"The whole of Europe has seized on it," says Ismail Erkan, mayor of one of the neighbouring Arab villages. In his mid fifties, he supports himself with a walking stick, thrusting it into a muddy path between clay-brick huts and crumbling concrete barracks.

The village is called Yayvantepe and lies just under three kilometres from the monastery, one of half a dozen conflicting parties in the dispute surrounding Saint Gabriel Monastery. It is a conflict begun indirectly by Europe; ever since surveyors arrived last August to create new land registers conforming to EU standards, there has been no more peace.

Neither the monastery nor the surrounding villages agreed with the results of the boundary surveys. Since then the monastery, the Arab village of Yayvantepe, the Kurdish villages Eglence and Candarli, the Turkish treasury and the forestry authorities have all been in conflict.

The dispute is being fought out in the courts of the regional capital Midyat, probably the most multicultural town in Turkey. A carved limestone obelisk at the entrance to the town shows the city crest on one side and on the other three a church, a mosque and the Peacock Angel of the Yazidi religion; the town is proud that all three religions live together here.

Kurds in turbans, Arabs in keffiyeh, clean-shaven Christians and bearded Muslims with a cap on their heads all wander across Midyat's marketplace. Many of the older residents speak four languages as a matter of course; Kurdish, Turkish, Aramaic and Arabic. One of them is Rudi Sümer, the young lawyer representing the monastery in the dispute.

In his office in a passage off the marketplace the twenty-seven-year-old outlines his arguments. Illustrating his point with historic certificates, documents and aerial photographs, he says that the monastery's boundaries have been confirmed by records since 1938 and were confirmed again in 1950 by the authorities.

The land surveyors unfairly succumbed to pressure from the surrounding villages and marked the boundary at an equal distance between the monasteries and villages, meaning that some of the monastery's land passed to the villages, says Sümer. The monastery made a complaint to the land registry. The complaint was rejected so they took their case to the local court.

The villages reacted by bringing a charge against the monastery that they had appropriated national woodland, which led the treasury and the forestry authority to investigate the issue. Three cases are now being heard, at the local court, the district court and the land-registry court.

Tur Abdin – one of the oldest Christian regions

On hearing days, a colourful throng jostles in front of Midyat's court buildings, as the spectators come from far and wide, from the local Aramaic-Christian villages but also from the west-European Aramaic Diaspora which today accounts for many more Tur Abdin Christians than the number who actually live in the region of south-east Turkey itself, one of the oldest Christian areas in the world.

Already decimated during the Assyrian massacre nearly a century ago, over the last few decades most Assyrians emigrated, fleeing from poverty, discrimination and above all from the war between Kurdish rebels and the Turkish army, in which they were caught in the crossfire.

A cautious trend towards return has begun, with Assyrian families from Germany, Sweden and Switzerland coming back to Tur Abdin and rebuilding their war-torn villages. The regional government is supporting them with electricity cables and road-building. The majority of the Diaspora however remain distrustful of the Turkish government's reassurances that their return is welcome. 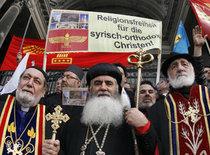 ​​"Save the Monastery of Saint Gabriel! Save Christianity in Turkey!" their relatives shout on demonstrations in Germany. They see the land dispute as an attempt to undermine the monastery's existence and banish the last Christians from their ancestral homeland.

On the dusty square in front of the village mosque in Yayvantepe it's another story. "We have nothing at all against the Christians," an old man in a red and white keffiyeh complains, "but they are doing us an injustice."

Several of the men have rapidly come together in front of the mosque. "The monastery began the legal proceedings; they took us to court," says one of them. "So we filed a charge against them too; it's a matter of honour."

Mayor Ismail Erkan sits down on a stool. "The thing is," he says, "in our culture when there is an argument between two tribes or two villages it is the custom for a mediator to bring the two sides together and reconcile them."

The atmosphere in Tur Abdin has now been poisoned permanently. The court cases in Midyat have been under way since last December. "We are confident that the courts will rely on the facts and documents and that a fair judgement will be made," says Can Gülten, secretary to the bishop.

In order to support the Christians of Tur Abdin, politicians from Germany and other European countries have been visiting the monastery in solidarity, while the court cases are still being heard, which has in turn embittered the Muslim villagers; the men in front of the mosque mutter that the monastery is getting Christian support from Europe.

The Turkish Government has also felt the Europeans' critical gaze. "We do not want the problem to become an international crisis," said a spokesperson of the ruling AKP party recently. President Recep Tayyip Erdogan has instructed the treasury and the forestry authority to reach an amicable settlement with the monastery.

Whether or not such a political settlement can be reached without waiting for a court judgement, the Saint Gabriel dispute will have had a lasting effect on Tur Abdin. "We no longer visit each other," says mayor Ismail Erkan from the neighbouring village. "The atmosphere between us has frozen."

END_OF_DOCUMENT_TOKEN_TO_BE_REPLACED
Social media
and networks
Subscribe to our
newsletter