Pakistan's anti-Ahmadi laws have been in place for almost 40 years now, and the impact on this religious minority has been devastating. In a war of attrition, the laws have ground down the Ahmadi community, scarring an entire generation. Fear, flight and persecution are the hallmarks of life for the Ahmadiyya in Pakistan. According to Mohammad Luqman, there is little hope of improvement

A few weeks ago, a shaky video did the rounds on social networks. It showed a group of men armed with sledgehammers hacking away first at the domes and then at the Shahada, the Muslim profession of faith ("There is no God but Allah, and Muhammad is the messenger of Allah"), carved in stone on the front of a building.

The film could easily have been mistaken for footage of some incident in India, where radical Hindu mobs have recently attacked and destroyed a number of mosques. But the recording was not made in India, it was made in the Islamic Republic of Pakistan. The incident in question took place in March of this year in the village of Gharmulan Virkan in the north-east of the country.

In early 2021, a village resident complained to the local police that the Ahmadi minority in the village was running a school. He also complained that the Ahmadi mosque was architecturally similar to other – Muslim – places of worship and was, therefore, in contravention of Pakistan's anti-Ahmadi laws.

The Ahmadi movement, which was founded by Mirza Ghulam Ahmad (1835–1905), is considered by many Muslims to be un-Islamic. In 1891, Ghulam Ahmad declared in Qadian, India, that he was the second coming of Jesus and the Mahdi, whom Muslims believe will appear at the end of time.

At the mercy of the mob ... and the police

The man who lodged the complaint in Gharmulan Virkan had the support of a group of Barelvis, an Orthodox Sunni Muslim movement, that has become increasingly radical in recent years and has been agitating against the local Ahmadi community for some time. 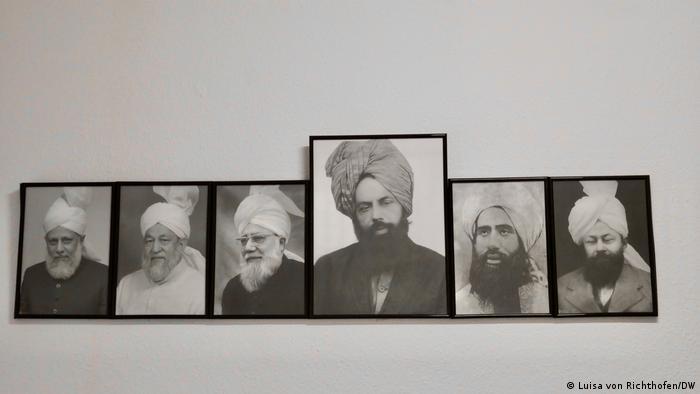 Although Mirza Ghulam Ahmad is revered by Ahmadi Muslims as the promised Messiah and Imam Mahdi, Muhammad nevertheless remains the central figure in Ahmadiyya Islam. Ghulam Ahmad's claim to be a subordinate – "ummati" – prophet within Islam has remained a central point of controversy between his followers and mainstream Muslims, who believe Muhammad to be the last prophet

On 17 March – before any court had made a decision on the matter – the local police force took matters into its own hands. It closed the school and, with the help of members of the local authorities and a Sunni mob, destroyed the domes and the Shahada engraved on the outer wall of the mosque. When they were finished, the religious mob began chanting in Arabic: "man sabba nabiyyan faqtuluh" ("whosoever insults a prophet, kill him").

When asked about the incident, the police officer responsible claimed that a Pakistani law prohibits Ahmadis from building places of worship in the style of a mosque. He also said that he had acted in order to keep the local peace.

He wasn't the least bit bothered by the fact that no court and no other state agency had authorised him to take this action, or by the fact that no Pakistani law prohibits the Ahmadis from building domes or minarets at their places of worship. After all, Hindu temples and Sikh Gurdwaras (places of worship and community) on the subcontinent also have domes and minarets.

In Pakistani law, the so-called "anti-Ahmadi laws", known as Ordinance XX, massively curtail the religious freedom of the Ahmadiyya. They were promulgated in 1984 during the rule of Zia ul-Haq.

Article 298-B of Ordinance XX declares it a punishable offence for Ahmadis to use Islamic praises to pay tribute to their religious figures, to refer to their mosques as mosques and to recite the Adhan, the Islamic call to prayer.

Article 298-C states that Ahmadis are prohibited from behaving like Muslims, calling their faith Islam, propagating their faith or outraging in any manner whatsoever the religious feelings of Muslims. Contravention of this article is punishable by a prison sentence.

In short, Ordinance XX makes practically every religious act by an Ahmadi a punishable offence because it could be interpreted as being the behaviour of a Muslim. Ahmadis do in fact see themselves as Muslims and observe Islamic acts of worship such as prayer or the recitation of the Koran. 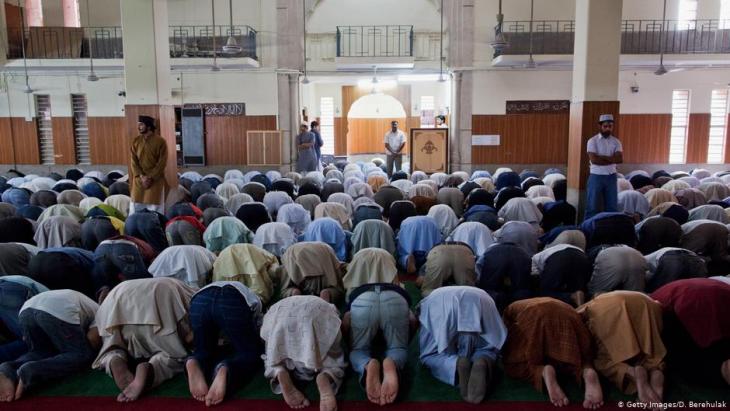 Ordinance XX – the "anti-Ahmadi" laws: article 298-B makes it a punishable offence for Ahmadis to use Islamic praises to pay tribute to their religious figures, to refer to their mosques as mosques and to recite the "adhan", the Islamic call to prayer. Article 298-C states that Ahmadis are prohibited from behaving like Muslims, calling their faith Islam, propagating their faith or outraging in any manner whatsoever the religious feelings of Muslims. Contravention of this article is punishable by a prison sentence. Exactly what constitutes the "outraging of religious feelings" is not defined anywhere

In particular, the clause that prohibits all actions that "outrage the religious feelings of Muslims" leaves much room for interpretation. Just what exactly constitutes the "outraging of religious feelings" is not defined anywhere. Given that the very existence of Ahmadis outrages many Muslims' religious feelings, everyday insults, discrimination, and attacks on Ahmadis are rarely – if ever – punished.

Ahmadi parents in Pakistan teach their children from a very early age to avoid all discussions about religion at school, at university or with their neighbours. They are cautioned to avoid answering – wherever possible – questions about their faith because the answer they give could be construed as an outrage of the other person's religious feelings and consequently a contravention of Articles 298 B and C. Even children are not safe from these draconian laws. Numerous Ahmadi children have been arrested on charges of insulting Islam.

Both Ahmadi students and professors in third-level education are at the mercy of religious fanaticism. Even the dead are not left to rest in peace. There are regular reports of Ahmadi graves being desecrated and Ahmadi citizens being refused permission to bury their dead in municipal cemeteries. For almost 40 years now, the Ahmadi minority has been living in constant fear of falling victim to Ordinance XX.

Rabwah: a fortress by any other name

Many of the persecuted have no choice but to flee to the city of Rabwah, which has been the main centre of the Ahmadi community since the establishment of the state of Pakistan. But even there, they are not safe. With its tank traps and strict security measures, the city resembles a fortress. Friday prayers have not been held in the main mosque for many years.

For safety reasons, women and children are not allowed to visit the local mosque. Annual Ahmadi assemblies and Ahmadi youth meetings have been banned by the government. The city's only bookshop was closed after its 80-year-old owner was arrested for selling "prohibited" works and for violating Ordinance XX.

What's more, books by Mirza Ghulam Ahmad, the founder of the Ahmadi community, or his caliphs cannot be found anywhere in the city because they have all been banned. Publication of the local newspaper and a number of magazines stopped after a police raid in 2016 that targeted the community's central publication department for allegedly using "Islamic terminology" and publishing prohibited works.

The community's websites are blocked in Pakistan. Indeed in 2021, the Pakistani Media Regulatory Authority tried to have an Ahmadi website in the USA shut down. It is becoming increasingly difficult for Ahmadis to provide religious instruction and to discuss the tenets of their faith because state authorities are hampering access to their scriptures.

Numerous Ahmadis have already been killed in attacks in Rabwah. The fear of the next attack and assault is omnipresent. Every year in September, tens of thousands of mullahs and their supporters parade through the streets of the city, chanting slogans and insulting the Ahmadiyya and its religious leaders by way of celebrating the "historic victory" of 1974. This was the year when parliament succumbed to pressure from radical forces and declared Ahmadis to be non-Muslims.

When these marches begin, the city is gripped by a ghostly atmosphere, and public life grinds to a halt. Ahmadis barricade themselves in their homes until the mob has gone. Neither the police nor state authorities ban such provocative marches and simply let the mullahs do as they please. Although the Ahmadis built the city of Rabwah themselves, they are still subjected to daily insults and discrimination there.

Although 95 percent of the city's residents are Ahmadi, not one of them sits on the city council. Residents have no say in any of the general issues affecting the city, not even in the decision to change the name of the city from Rabwah to Chenab Nagar because the word Rabwah appears in the Koran – a decision that was made as a result of pressure from the mullahs.

Blanket denial from the government

Meanwhile, a deceptive calm has descended on the village of Gharmulan Virkan. The domes of the Ahmadi mosque are still a political issue. Are Hindu temples and Sikh Gurdwaras going to be targeted next because they have domes and minarets? No one can say at present. One thing is certain, however, namely that the situation in Pakistan is growing increasingly precarious for religious minorities.

When questioned by a journalist during his visit to Germany, the foreign minister of Pakistan roundly rejected as propaganda the assertion that minorities in his country were being persecuted. This response showed that the Pakistani government is either turning a blind eye to the problem or is powerless to combat religious fanaticism in Pakistani society.

At the very moment the Pakistani foreign minister was denying that there was any persecution of minorities in Pakistan, another Ahmadi place of worship was being attacked by a mob and the police and its minaret and Mihrab, the prayer niche that points towards Mecca, torn down.

Young performers in Lahore are shaping their lives outside the perceptions of Pakistani society, which views many art forms as obscene. As part of a new generation that hopes to ... END_OF_DOCUMENT_TOKEN_TO_BE_REPLACED

The Pakistani Taliban, known by the acronym TTP, are regrouping and reorganising, with their leadership headquartered in neighbouring Afghanistan, according to a U.N. report from ... END_OF_DOCUMENT_TOKEN_TO_BE_REPLACED

Every year in December, the team at Qantara.de takes a look back at the articles that proved most popular with our readers. This year is no different. Here is a run-down of the ... END_OF_DOCUMENT_TOKEN_TO_BE_REPLACED

In 1971, Bangladesh seceded from Pakistan after a bloody civil war to become independent. But the events of that time are still largely taboo today. A reappraisal of this central ... END_OF_DOCUMENT_TOKEN_TO_BE_REPLACED

"American*ish" – co-written by Aizzah Fatima and Iman K. Zawahry, and directed by the latter – is a rom com for an America too many don't want to acknowledge. Whereas most ... END_OF_DOCUMENT_TOKEN_TO_BE_REPLACED

The "War on Terror" has not only failed in Afghanistan, it has exacerbated insecurity and generated more terrorism. This is the main thrust of journalist Emran Feroz in his book, ... END_OF_DOCUMENT_TOKEN_TO_BE_REPLACED
Author:
Mohammad Luqman
Date:
Mail:
Send via mail

END_OF_DOCUMENT_TOKEN_TO_BE_REPLACED
Social media
and networks
Subscribe to our
newsletter