Skip to main content
Religious Tourism in the Middle Ages

The late Middle Ages gave rise to a kind of religious tourism. The pious and the adventurous headed east to visit holy sites and exotic locations. One of them was Bernhard von Breydenbach, a Deacon of Mainz Cathedral. By Sandra Schmies 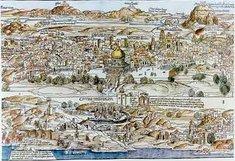 ​​On April 25th, 1483, Bernhard von Breydenbach embarked from Oppenheim am Rhein upon his pilgrimage to the Holy Land. Accompanying him in his entourage were Count Johannes von Solms, Knight Philipp von Bicken, Utrecht painter Erhard Reuwich, as well as a cook named Johann and interpreter Johann Knuss.

After 15 days on horseback, they arrived in Venice, having made use of "significant expenditures and detours".

The usual practice for pilgrims arriving in Venice was to pay for passage on a pilgrim ship to Palestine. The crossing was expensive and uncomfortable. Travelers from various countries were squeezed into a tight space. The food was usually bad and many became ill during the voyage, since sanitary conditions were miserable.

Some managed to climb over their fellow travelers and relieve themselves on deck. Added to these discomforts was the fear of being shipwrecked or attacked by pirates.

Nevertheless, the journey to Palestine was reserved for an elite clientele, since only well-to-do pilgrims could afford the considerable costs of the trip. For this reason, such a pilgrimage was especially well-suited to increasing the prestige of the traveler. It is estimated that about 300 to 500 Europeans made the pilgrimage to Jerusalem annually during the late Middle Ages.

After roughly two months at sea, Bernhard von Breydenbach and his entourage had their first glimpse of the Holy Land. The initial moment of happiness was quickly followed by a sobering realization, however: in order to be allowed to enter Palestine, the pilgrims first had to request safe passage from the Mamelukes.

Breydenbach and his fellow travelers had to wait six more long days aboard the ship before representatives of the Sultan's court came to Jaffa and granted them permission to set foot in the country.

At this point, each pilgrim was registered and asked to pay a fee. Nothing was free in the Holy Land. It was not uncommon for pilgrims to be "temporarily housed" in a damp cave on the beach during this processing procedure, and remain locked up inside for several nights. The locals didn't like to leave visitors from crusader states unguarded.

At the same time, the new arrivals were received by Franciscan monks. They viewed themselves as the final bastion of orthodoxy in the Holy Land and saw to it that pilgrims visited Jerusalem in a spirit of pious devotion and maximum benefit for their spiritual welfare (a great many indulgences were available for purchase).

Like modern-day travel guides, the Franciscans prepared the pilgrims in several different languages for the customs in the Orient and organized the stay in Jerusalem by initiating daytrips to the holy cities and, in some cases, arranging accommodation.

Breydenbach's report on Palestine focuses entirely on describing the holy cities. He includes descriptions of the site of the Last Supper and Christ's Way of the Cross, but also of the stall in which the paschal lamb was raised. Practically every location was a sensation and held a part of the story of salvation. The highlight of the pilgrimage was naturally a visit to the Holy Sepulchre, where pilgrims were permitted to stay the night in exchange for a bribe. However, we learn practically nothing about the Oriental city of Jerusalem.

But Bernhard von Breydenbach does discuss the residents of Jerusalem in his account. Here again, the central focus is on religious aspects, since the clergyman explains the religious errors committed by the various denominations represented in Palestine. In the process, he expresses an inwardly directed missionary zeal: above all, Breydenbach aims to strengthen the faith of European Christians by presenting Islam in a contrasting, negative light.

The resulting picture of Islam and its founder Muhammad is a combination of facts, distortions and complete fiction. According to the author, Muhammad – who is denigrated as "Satan's son" and "a dog most impure" – had been raised by a renegade Christian monk and, further, that as a young man he had founded, using deceitful symbols, a new religious persuasion which represented nothing more than a sect or offshoot of the Christian church.

Breydenbach's elaborations on Islam and above all his denigration are hardly the result of what he experienced on his pilgrimage. Instead, they were extracted from other standard works of his time. 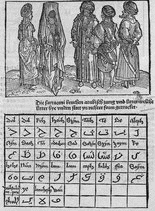 ​​The Oriental Christians are also painted in a less than flattering light in his book. He refers to the Maronites and Nestorians as heretics, since they have broken off from the Holy Church in Rome. No doubt is left here as to the Roman church's right to absoluteness. The concept of 'christianitas' is employed to define the line between the familiar and the foreign and becomes, in this argument, a good/evil dichotomy.

Breydenbach's account of his pilgrimage has become famous above all for the accompanying, lifelike wood engravings. The painter Erhard Reuwich supplied the originals. His pictures portray the various religious communities in a completely different light. For example, we see a group of Arabs with magnificent robes and weapons, while tall women – one of whom is veiled – seem to be eavesdropping on the men's conversation. A version of the Arabic alphabet – though incorrect – is also among the prints.

These images reflect a thoroughly positive and/or an open-minded interest in the people of the East which transcends religion.

Once the various tours of Palestine had been concluded, many of the pilgrims turned toward home and sailed with the pilgrim ships back to Venice. Breydenbach and his entourage decided instead to travel on through the desert to Sinai and Egypt. At this point, the reader senses that the author must have left his Franciscan guides behind in Jerusalem, because his comments about the strange landscapes and people become more personal and less restricted to the religious content of the journey.

His encounters with Muslims (who he usually refers to as Saracens) are, on the one hand, marked by his annoyance at unexpected customs duties and fraudulent activities, yet on the other hand also colored by positive experiences. He explains, for example, how people in the desert offered water to him and his travel party "for God's reward," even though they had to go "to great trouble" to draw it from the ground, or that they joined up with a trade caravan whose members "were not unpleasant to us."

He also spoke with the native people, apparently with the help of his interpreter. Repeatedly, Breydenbach learns that Muslim pilgrims honor the same relics as Christians. Nevertheless, the official version of Islam presented earlier in the book is not revised through these encounters. The clergyman's view is too static in this case.

The Orient as an exotic locale

Only in his descriptions of the city of Cairo does Breydenbach report of the wonders and the beauty of the Orient: "The Sultan's Palace is so large that all of Ulm or half of Nuremberg could fit inside. There are so many precious mosques here with high towers that I have to believe that there were never as many churches in Rom as there are mosques here.“

In these passages, the Orient becomes a exotic locale full of curiosities. For example, in amazement he describes a form of medieval fast food, found everywhere on the streets of Cairo: "We also saw many Saracens cooking in the streets and alleyways (…). Many carry their kitchens through the city upon their heads, with a burning fire, simmering pots and roasting spits.“

The author also captures events at the slave markets. Breydenbach and his party are themselves mistaken for slaves; a merchant offers their Mameluke guide ten ducats per person.

As with many a modern-day trip to the Orient, a visit to a Hamam was also not to be missed: "Many of us went to the sweating-bath, since the Saracens have beautiful bathhouses of marble. They also display fine service in the baths. They have an odd way of manipulating or rubbing the limbs of the bathhouse visitor."

After completing their tourist itinerary in Cairo, the pilgrims traveled via Alexandria on a ship back to Venice.

Today's reader of Bernhard von Breydenbach's travelogue will be left feeling somewhat perplexed at the end. How was it possible for this Cathedral deacon to present virulent rants against Islam on the one hand and express his admiration for the sacred buildings of the Muslims on the other? How could he have expressed a general mistrust of the character of Muslims and still praise their willingness to serve?

Much of this can be traced to the prevailing view of literature in the late Middle Ages. A written account of this kind was still limited by strict boundaries caused by expectations placed on any account of a pilgrimage and by that which had previously been reported, so that one's own statements could not be doubted. An author was not yet expected to report something new. Instead, his task was to take up something already familiar and topically stabilized in a new form.

We must also not overlook that as the Deacon of Mainz Cathedral, Breydenbach was a high church dignitary. Thus, the account of his pilgrimage is, above all, to be read in a medieval-Christian context. To emphasize the pleasures of a holiday or even to express tolerance toward the "infidels" would have been completely out of place by the standards of the late Middle Ages.

Despite this, Breydenbach's report does include the first traces of "Enlightenment." In itself, the fact that author included the Arabic alphabet, a German-Arabic glossary or portraits of the Oriental people as part of his book suggests that he was interested in objectively portraying an Oriental world that was foreign to him.

END_OF_DOCUMENT_TOKEN_TO_BE_REPLACED
Social media
and networks
Subscribe to our
newsletter